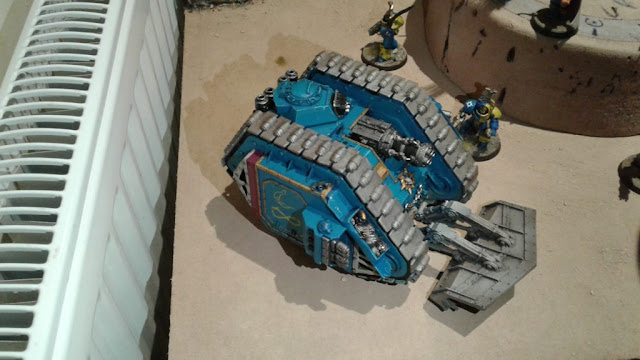 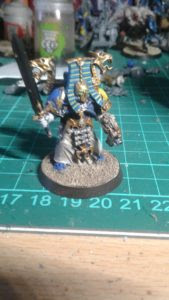 laundry list of models, a conversion is a fantastic way to personalise any force, alien, heretic,imperial or undecided. As time moves on, new parts are constantly being made, availablepresenting thousands of new potential ideas and possibilities. And that’s before we considerthird party bits makers, historical kits, even children’s toys, which opens several routes to achieve the goal of a cool custom character, tank, monster or whole army. The hobbywouldn’t be what it is without the mad, crazy, beautiful and bespoke creations we are allcapable of creating. New kits, it seems, are making things easier and more convenient foreveryone who even as a vague notion of customizing a model with more than a snazzy paint scheme…

But as we advance in what many consider a golden age of converting, does this mean we should stop looking to the past for donor models and bits? Is it ever worth using old, lower quality sculpts when instead we can benefit from crisp lines and ease of use that today’s plastic and resin kits can offer? I thought I would attempt to answer that question for those who are on the fence.

Old models have a significant part to pay in our great hobby. Not only do they show us howfar things have come in terms of sculpting technology and individual skills but a lot of thesemodels are great to have in any gamer’s collection, and still of use to people. Not just the‘Oldhammer’ collectors; many average armies can still enjoy the odd vintage piece dotted inthe collections to add a bit of flavour. Classic commissars, retro robots and old Orks aregreat additions, whether using new rules intended for their modern counterparts, or a count-as unit with a similar profile.

Even if they’re never used on the tabletop they make for interesting curios and display pieces. For instance, I had in my spares drawer an original Space Santa model from GW. Early 80s I believe, and of no use whatsoever in either my Thousand Sons, Vraks renegades or Undead armies, but I couldn’t get rid of it either. There was something about it that made me nostalgic for a time before I was even born, let alone introduced to the hobby. As someone who was introduced to the world of Warhammer in 2003, my experience of these early days was non-existent. I was grasping the nuances of Chaos Space Marines and Bretonnians, just about managing to assemble the basic sets correctly (mostly) with little knowledge of what came before the then current range of plastic and hybrid kits. Only in the last few years have a I really taken an interest in older models and their potential in the alchemical process of kitbashing. What started it all was a series in some old White Dwarf articles, featuring a customized Iron Warriors force. Some of the models used parts from then current plastic and metal kits, and a bit of Forge World, plus some older metal imperial and chaos marines. With a desire to mimic the conversions I searched hobby shops high and low for these models. On my travels I ended up coming across a couple of the old collectors’ guides for Chaos Space Marine and Warriors of Chaos. The books opened a new world to me, the ‘old world’. These books were a fanatic source of ideas, and presented new potential sources for conversion and chaotic corruption. As an avid converter I compare converting and modelling old models it to stuffing a Hellcat Hemi into a 60s Charger. Like models, some car guys would see that as impure, but to many its a sensible idea to revive an old item with newer, better parts, and opens hundreds of new possibilities. Modelling is the same. Many models can benefit from something as simple as a new head or hands. Especially ones that have had a hard life. 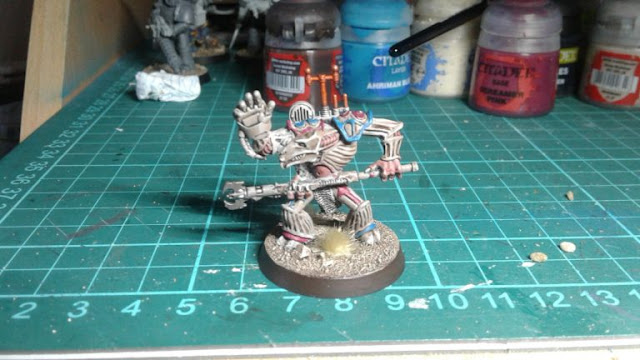 By improving the damaged, incomplete and imperfect things we find to create something that feels new once again. I have a quite a good example in my own collection. I acquired an old Renegade from those early days of the Chaos line-up, missing an arm, a backpack and a staff tip, long lost to time and a pair of ravenous clippers. Previously damaged and unloved, it was renewed with a Scion power fist and backpack. It makes for an interesting model, one I can confidently claim is one of a kind. With a simple colour scheme and a bit of imagination I could use it in 8th edition. One of the Changeling’s many forms? A long-forgotten traitor warlord wandering the daemon worlds in the eye? Endless possibilities, thanks to an old relic.

There are always going to be a few issues in using old models in conversions. One of the biggest (pun somewhat intended) is scale creep. An old ork Stormboy or Terminator looks laughably small against their modern counterparts. Even the mighty land raider of the daylooks dinky when compared to the much bulkier, meaner offspring. If you’re just using one or two older parts it’s less obvious, but the scale issues become more apartment the more of the original you use. 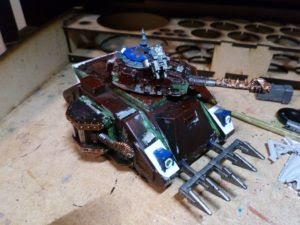 If you’re used to working exclusively with plastic kits it can be much harder to work with older models. A lot of older figures and kits were cast in metal, and I’ve noticed that even plastic models can be a bit more brittle. An original metal dreadnought (ferrous infernum) is much harder to customise than the current plastic replacement kit, and this can present a challenge. The classic Chaos Predator (One of my pride and joys, above) is another example. It is rewarding to make it work in the end, but it’s easy to wonder why you aredoing this when you can get a new plastic model that’s similar, readily available and far easier to work with.

A model’s individual rarity can also present a big barrier. Sometimes you have a great conversion in mind using an old model, but must abandon it when you consider how many times you can realistically recreate it. Using a couple of old parts on characters and tanks ismost often the easier route, as you’ll only have a few of those in a typical army, but converting larger squads such as cultists and Ork mobs made take more of your time and budget to source multiples of the same parts. 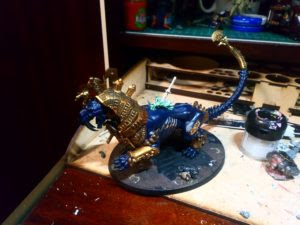 One of the biggest barriers to retro conversions is the same faced by those using only the newest kits, cost. Even the more common models of yesteryear can fetch a significant price, especially iconic kits like the Land Raider or RTB01 marines. Even a barely usable modelcan put a dent in your wallet. If you have deep pockets it’s not so bad, but if like me you have a set hobby budget, that dream conversion based on an original Space Crusade dreadnought or the event-only Archaon on foot will have to wait a little while longer. On asimilar note, can you afford to cut up those rarer models? Some models can fetch a significant price, and you could use the money raised to fund many more projects in same cases. If you’re not motivated or bothered by money, fair enough, but you do find yourselfasking if you can bring yourself to cutting in half a model that could pay for a whole box or two of the latest plastic kits.
Whilst I have never experienced this next issue first hand, I could see why this might be a contentious problem. The matter of store support. If a potential customer asks about your custom models or the kits used, and the store manager has to say ‘sorry, we don’t sell those’ it doesn’t look good on them and may prevent a sale. Some may wish to showcase only what they do sell, and it’s understandable, as in many cases a live game can make for a great attraction when introducing people to the hobby. With a business head in, would you want to show odd things people can’t buy in your store? A gaming club would be a different matter as that is a much more hobby-orientated arena than a sales-based one. At the end of the day store managers need to make a living too. On balance, what conclusion can we draw on the use of classic models and parts in new conversions? The simple answer is it depends on what you look for in this hobby. There’s always going to be people for using old models, those against it, and those who couldn’t give two Jokaeros. Whether its liberating, heresy or something in between, at the end of the day it’s a very expressive personal hobby, and how you choose to express yourself is up to you. Providing it doesn’t intentionally offend people, go for it. Create those amazing captains, revive that Gorkamorka gang with new gubbinz, or make something new using the latest plastic kits. The only person you need to impress is yourself*, if you’re happy with what you’ve made, who’s to tell you that it is wrong?
Sign Up HERE For Our Weekly Newsletter Released Every Friday With Hobby News And Curated Content From Around The Internet
Well, unless you’re a commission modeller with clients to please…
By Talk Wargaming