Me and my regular opponent decided to have good old fashioned fisticuffs in the best way possible, with a good game of Warmachine. 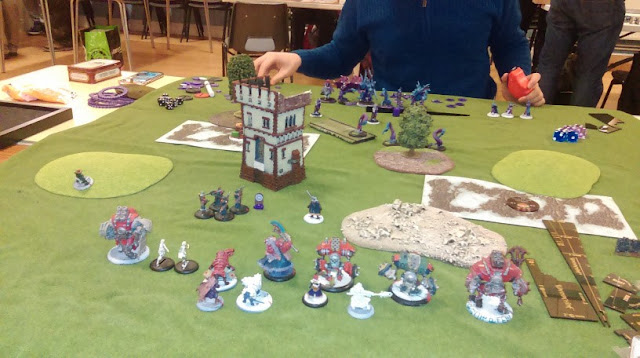 Khador (Butcher3) vs Legion of Everblight (Vayl2)
75 points
Steamroller scenario 2016: Entrenched
Me and my regular opponent decided to have good old fashioned fisticuffs in the best way possible, with a good game of warmachine. This list is one of the ones that I might bring along to the Welsh Masters in May. As such, this list is designed to be extremely competitive and it isn’t the kind of list that you can use casually. But as this blog is for newer players, I’ll be pointing out any mistakes that I see and why I’m doing what I’m doing.

My opponent wins the roll off and picks a table edge. Now, because I’m playing Butcher three and because this is a two zone scenario I want to be in a position to score first. Scoring happens on the second player’s second turn, so I decide to go second. And our deployment looks like this. 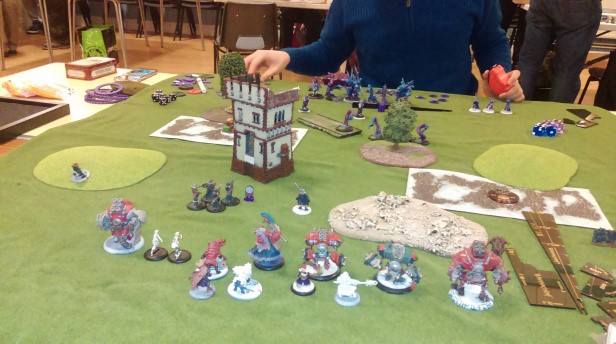 Turn 1
Vayl is a very good spell caster, so that’s exactly what he does. Learning from our last game my opponent puts Occultation on the Hellmouth, giving them stealth. Last time we played, Kell and the Marksmen killed one Hellmouth top of turn one by automatically dealing 9 points of damage with three deadly shots. Everything else just runs or tramples up the board. Because you can cast animi before trampling, so the Seraph can move up some extra distance and still cast Slipstream.
I also just move things up. The large amount of stealth on the board makes my snipers pretty useless, but my Marksman takes a shot at the Scythean in the trench and does three points to his spirit. My other snipers move around, trying to avoid being hit by his snipers. Butcher himself puts up Energiser and Silence of Death onto his unit and charges a model on a hill to get towards the zone. My other jacks follow up, the Devastator goes towards my opponent’s zone, and my other three go towards my own.
Would would I do different! – I really had issues with that tower. I should have probably centralised my warjacks and put my snipers on the flank over my own zone. 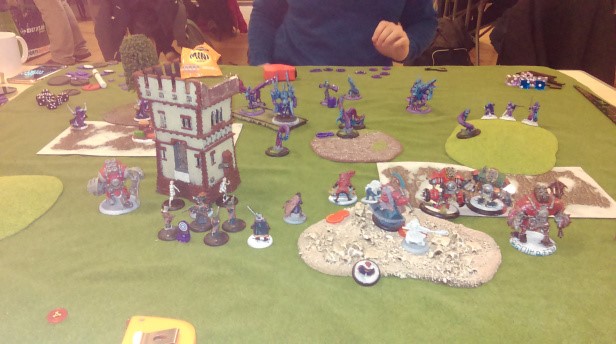 Turn 2.
Vayl upkeeps Occultation and moves around. This is where my opponent makes a silly mistake. He wants to throw an Oraculi at one of his tentacles in order to arc spells onto my units, but he left Occultation on them and cannot see his own models. So Vayl just puts admonition onto the Scythean, who then runs into his own zone. Typhon advances up and sprays my objective, killing it and damaging one of my Kodiaks, he also makes a mistake and kills one of his own tentacles. His snipers murder all my Widowmakers and the Seraph kills an argus, triggering Vengeance for Butcher’s unit. He also makes a larger mistake in leaving my zone uncontested. 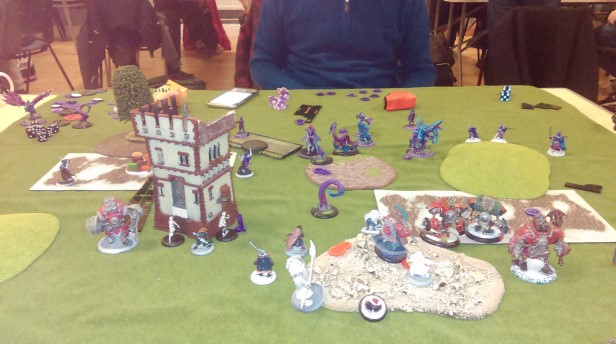 Despite the angle from the picture, my Devastator is actually just within Butcher’s control, so he gets a point. I load up the front Kodiak with three focus, everyone else sits on just their power up focus. Butcher energisers for two, moving my jacks up, pulls his dog back, and then the Kodiak charges Typhon. Except Typhon has put up excessive healing, and I’m not lying when I say my Kodiak only does about three damage to the beast. I miss my charge attack and both my bought attacks. My second Kodiak runs up to keep his shameful excuse for a brother company, Ruin moves off to be in a position to charge Typhon if a gap opens up. Kell and my marksman shoot the Seraph, doing some more damage. My kayazy run to engage one Deathstalker and Annyssa. Even though she has parry, she cannot move forward without causing major order of activation issues. This allows me to keep her away from Butcher, who doesn’t want two poisoned arrows hitting him every turn.
My support gets to work, Madelyn puts up Parley, Orin puts up Stealth and the Ogrun comes up to shield guard Butcher from anything too nasty.
My devastator makes it into the zone, prevent my opponent from being able to dominate. But I can dominate my own, bringing the score to 1 all. 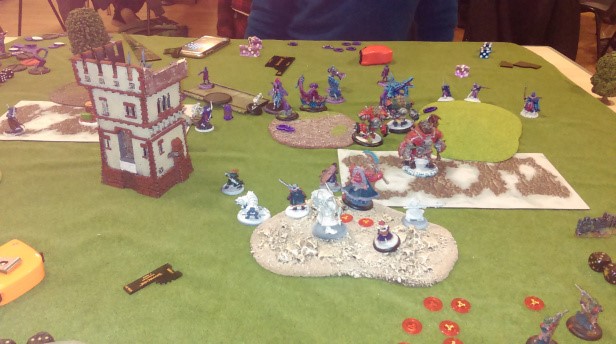 Turn Three
Val upkeeps occultation but she lets Admonition drop. She lands an Icy Grip onto the Kayazy, allowing Annyssa to kill one. The Scythean moves up, killing the other Kayazy but only doing about five damage to the Devastator. Armour 23 is too much for it crack, especially as Vayl lacks the ability to increase damage. The Hellmouth yanks in the front Kodiak and puts another tentacle in front of Ruin, and the Blackfrost shard Kiss the Red Kodiak and throw some bolts at him, but they just bounce off the armour. Typhon then beats the nine hells out of the Green Kodiak, including Critical: Pitching it into the Red one. He kills him with one fury left, which he uses to put up excessive healing again. The Hellmouth Tentacle prevents me from scoring on my turn. A deathstalker puts an end to Kell’s existence. 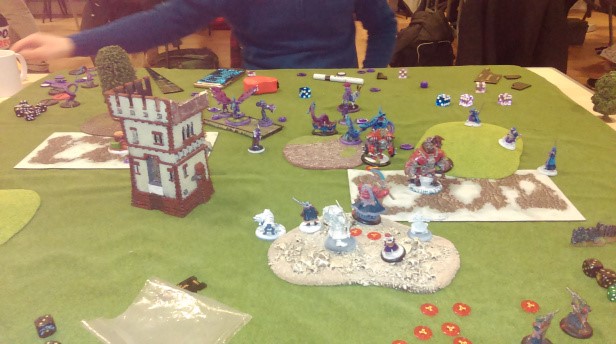 Butcher gives out 2 focus to each of my three jacks, leaving him on none. The Devastator opens up and punches the Scythean, leaving him on about three boxes. I made a slight mistake here in not having the Marksman shoot him first, who would only need a five to hit despite him being in combat. Instead he tries to kill the blackfrost shard member in the zone, but he fails to kill him. So Orin moves up and casts chain lightning. He boosts to hit with one of his tokens, hitting and killing the first guy, but the lightning also bounces twice, I boost both damage rolls and Orin successfully kills the Blackfrost shard by himself. The Red Kodiak forfeits his movement to stand up, and he also fails to do any serious damage to Typhon. At this point, I decide it isn’t worth sending Ruin in. So he ends up whacking the tentacle, clearing my zone for me.
Butcher activates, feats and then passes the turn. I go to two points. 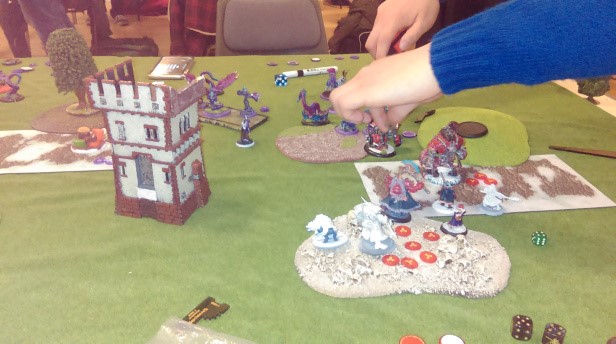 Turn four.
The Scythean rips great big holes into the Devastator, but leaves him on four boxes. The Forsaken, who has been sucking fury off the guy to keep him cool, charges into the weakened jack, but fails to kill him. Leaving him on a single box. The Hellmouth takes away the Red Kodiak, but doesn’t do much in the way of damage. Typhon moves up and sprays into my support pieces, the Bokur, Marksman and Orin all die, leaving just Maddy and Butcher He buys five attacks into Ruin, but can’t kill him. My last dog, who was damaged a few turns before is killed by a Deathstalker. Annyssa runs to the corner of my zone.
I forgot to take a picture at this point.
We stay at 2-1.
Butcher gets Vengeance and moves forward. I decide none of my jacks need focus, and the Devastator can’t have any anyway. He goes first and rain of deaths into the Scythean, killing him. The blast doesn’t hurt the Forsaken. Butcher charges in and kills Typhon, hot dice make it so with just two hits. Madelyn continues to Parlay, preventing tentacles from grabbing Butcher (I’m not going to ask exactly how Madelyn can seduce a tentacle, but I don’t want to know either.) Ruin charges Annyssa and kills her with his charge attack. My Kodiak thumps his fists on the Hellmouth, but he can’t kill the thing at dice – 2 with only one dice for damage. I probably should have boosted one of my attack rolls.
It is enough, however to take me to 3-1. 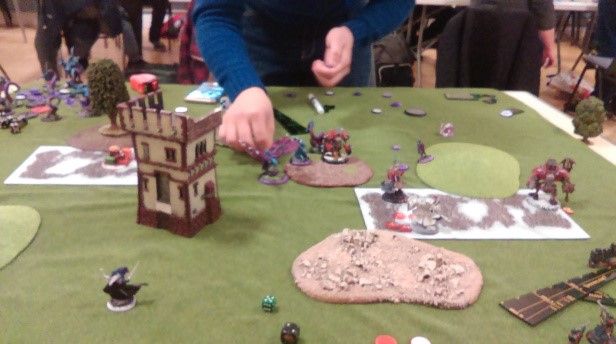 Turn five.
Vayl has to go for an assassination run. The Seraph rolls his shots and gets 2. He hits Butcher twice and causes five damage. Vayl feats, then throws one of her balls into the Seraph, allowing her to arc spells into Butcher. But when all is done, he still has 11 boxes left. The forsaken runs into the zone to prevent me from winning automatically on my turn (I would get four points on his turn, then I’d pass and go to five.) The Naga charges the Kodiak hoping for a crit, but fails to both crit and damage me.
Butcher gets a vengeance move and whacks the Seraph for half his boxes. A flashing blade does the job. He then walks backwards into the zone. The Hellmouth finally gets killed by the Kodiak, who vents steam and does a little bit of damage to the Naga. Ruin charges in and kills the Forsaken.
I go to four points. 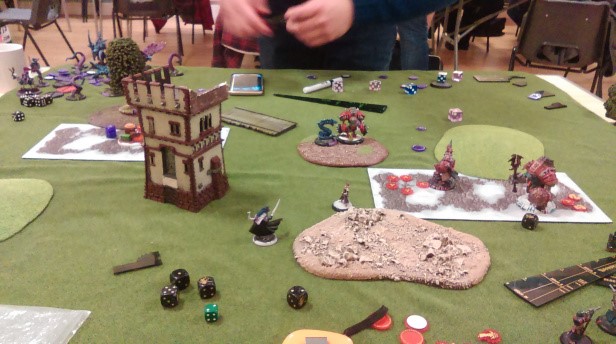 Vayl gets really angry and charges the Devastator, who he has failed to kill for the past two turns. Boosted a ball, she rolls 17 on two dice and finally kills the beast. The Naga gets hit by a free strike from the Kodiak as he walks to shoot Butcher in a last ditch attempt to kill him, but ends up losing his mind. Even then, the attack hits, but doesn’t hurt Butcher.
Vayl goes to two points.
On my turn I kill the Naga and pass my turn, I go to five points and win the game 5-3!
Post-match thoughts.
We both brought three lists to this match up (As the Welsh Masters is a three list event.) With my opponent playing Thagrosh1, Vayl2 and Lylyth2. Whereas I played Butcher3, Strakhov1 and Sorscha1. So in the game of ‘list chicken’ I had to bring a list that potentially had game into all three of those. And Butcher was that answer.
However, I also had to take the scenario into consideration…… And that was Butcher again, he is really good in games which use scenarios of this type. He has the ability to wipe out and dominate everything in a zone again and again. And that is exactly what I did.
I could have done better by going for my opponent’s zone with the core of my army and leaving my Devastator to keep an eye on my own zone, I didn’t have to open him up, and when he is at ARM23 he is pretty much impervious to Legion attacks, which cap at P&S 17, especially once I deal with the Blackfrost Shard. Which is exactly what Orin did.
It might seem odd to play Butcher as conservative as I did. But I find he does it really well. It’s up to my jacks to slow down my opponent whilst he holds the fort, and eventually you can get to a certain point in the game where he is immune to pretty much anything on the board, once Typhon and the Scythean were down, there wasn’t a whole lot left that can hurt him. Even with two shots and Vayl casting multiple spells at him, he didn’t even lose half his health, and that was with him facing backwards.