So, I was thinking I should make a tutotrial for how to make barbed wire / czech hedhehog obstacles for your 28mm game boards. 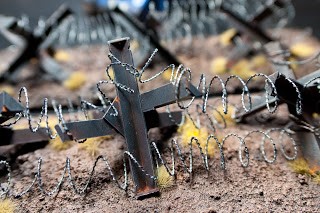 So, I was thinking I should make a tutotrial for how to make barbed wire / czech hedhehog obstacles for your 28mm game boards. Czech hedgehogs are anti-tank obstacles made of L or H shaped beams, and were used in huge numbers during WWII. Even when tipped over they still function, and if you're dumb enough to try and tip them over with your AFV, you're essentially stuck. 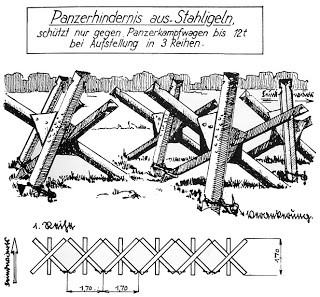 With todays tactics of layered / staggered defence I guess they're more or less out of fashion. But they do look awesome on the 40K-battlefield.

My suggestion is to count these as impassable for vehicles, difficult terrain (dangerous if you add barbed wire) for infantry with a 6+ save. The L-beams don't give much cover, just look at Saving Private Ryan (@4:40 in that video) if you doubt that.

A note on the hedgehogs you see in SPR. They don't have the end-pieces on because they were on concrete "feet" in order to keep them from sinking in the sand. If you plan to place hedgehogs on fairly solid ground you weld endpieces to them.

Now, Games Workshop makes a bunch of these, in the urban accessories set or something. The problem is that they're completely worthless. You do not want spiked ends on these since that would mean that your one tonne beam-construction slowly would sink into the ground. And from what I've heard, the molds are kinda crap. So hit the "more" link and away we go!
So, onto building realistic hedgehogs for our realistic games with melta-/plasma-guns! 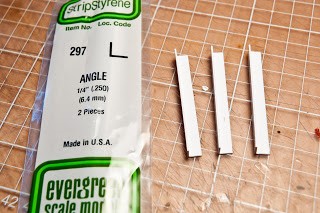 First cut three 60mm lengths of L-beam. 60mm is kinda the middle ground. Not too big and not too small. If you want bigger obstacles to stop Baneblades or something, make them 80-90mm long and go up in thickness on the L-beams. 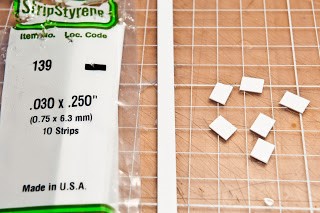 Next cut six square-ish pieces for the ends of your L-beams. They dont have to be perfectly rectangular and you can save some money by using a 0.75mm thick sheet instead. Since we'll be using one of these to make the brackets for the L-beams. I opted to buy strips since it saves some time and can be used for other stuff. 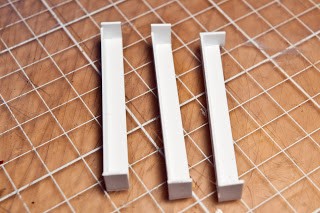 Glue them onto the ends of your L-beams. You will be cutting and trimming these later. So in order to do that without too much hassle, glue them now so the bond will be strong enough for some manhandling later on. 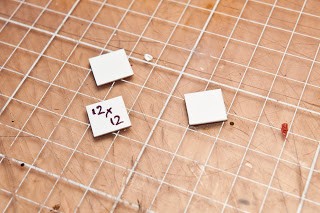 Now take your sheet of 0.75mm plasticard and cut two 12 by 12 mm squares. If you want bigger "Saving Private Ryan brackets" go a little bigger. 16x16mm or even 20x20mm. Score them from corner to corner, then remove one quarter... 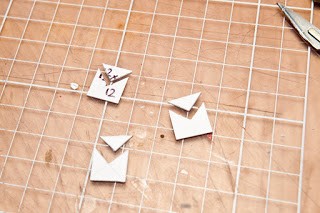 ...like this. These will serve as the middle bracket for your hedgehog. You only need two of these. Since I was making more than one hedgehog there are three in the picture (and a bunch more off frame). 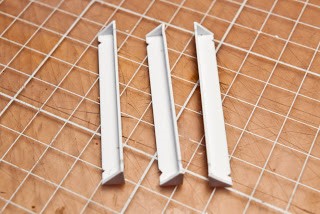 By now the glue on the ends of your hedgehogs should've dried and you can carefully trim off the excess from the end pieces. Keep the scrap if you plan to do more hedgehogs. Also cut notches 5mm in. These are for securing barbed wire to the hedgehogs and the hedgehogs to each other. 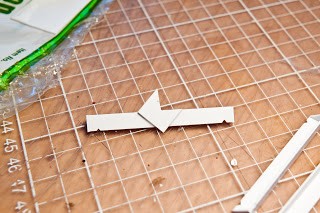 Glue one of the bracket-pieces on one of the L-beams. Be careful with positioning. You want it in the middle. 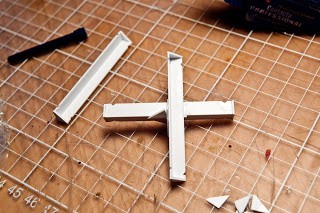 Do the same with the second L-beam and glue them together. This will make a cradle for the third and last L-beam. Wait a little for the glue to set. 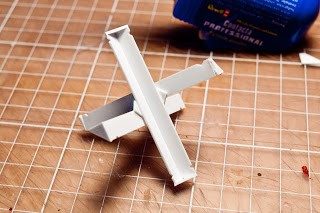 And then glue the third piece on there! Now you have yourself a czech hedgehog! If you really want to go all out, this is the time to add rivets to the bracket. That's way too fiddly for me, but if you have the time to do it. By all means do it. I'd recommend using 0.5mm rod and making the brackets a little bit bigger.

Now while you make two more hedgehogs I'll prepare part two of the tutorial in which I'll talk about basing the hedgehogs.

For the bases I used 5mm thick foamboard. Cut it at a preferrable length and width. I used 70mm 330mm for mine. The angled cutting tool leaves some scrap material. Use that and glue it on in random places on the foundation. This is to make the ground a bit uneven and more realistic. The foamboard will be pretty elastic, so you might want to add some plasticard underneath to give it more rigidity. YMMV.


I started painting the bases with Vallejos Black Lava. This is a favorite of mine nowadays. It really adds subtle texture to the (already textured) base. It also acts as a sealant and primer in one.

The next step is to add some colour to the bases. This will of course vary depending on how your game table looks. The important thing to have in mind when colouring bases is to use one or two muted colors and then add a much lighter one to break up the surface. For these I used two dark brown VMA colors and the light Mud Brown in splotches here and there. Kinda like an area highlight. These will be drybrushed later on when we've mounted the hogs in place. So onto painting the hedgehogs. 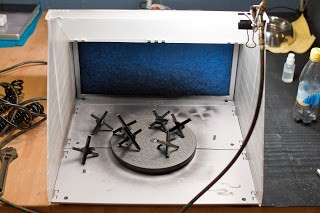 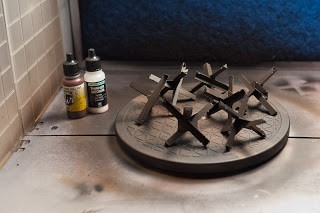 Basecoat them black and then add some thinned Hull Red (1:1 ratio colour to thinner) to give the appearance of rust preventing primer or something like that. The reddish tint almost looks like rust already. Something we'll add a plenty once they're on the base.

Time to add the hedgehogs to the bases (finally!). I prefer to use a thick cyanoacrylate glue for this. Glue them on and wait for the glue to set! This is important since we'll be drybrushing these next and it sucks to pick up superglue with your drybrush. Why I don't drybrush these before adding them to the base is also to add some lightning to the hogs. The underside won't reflect light, so there's no need to drybrush those parts. Right? :) 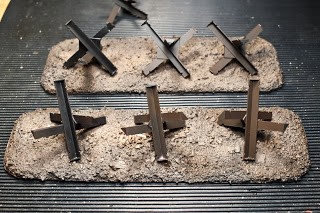 Now drybrush the hedgehogs. I used Citadel Boltgun Metal + Black — in a 1:1 ratio — all over the hogs and then a light drybrush of pure Boltgun Metal on the upper parts and edges. 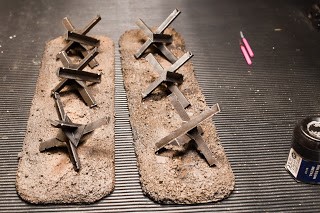 Decision time! If you want static grass on your bases, you can hide the feet of the hedgehogs with that. If you don't. Say if your game table is a barren wasteland. You will want to build up some gravel at the feet of the hogs and paint that in your mud & earth colors. I'll be using static grass and Silflor tufts so there will be no more building.

Drybrush your bases. I started with a middle between the lightest and darkest color. And then a lighter shade of the light color on the lighter colored parts. Just make it look good, ok? This is where you hide the glossy cyano-glue as well. Don't forget that! :) 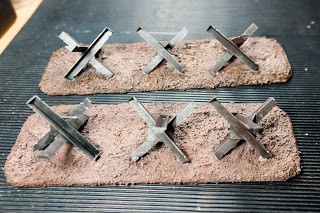 At this stage you could consider yourself done with the hedgehogs. But we'll take it a step further and add some barbed wire, static grass and pigmenting to make them more alive. 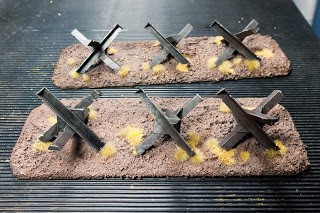 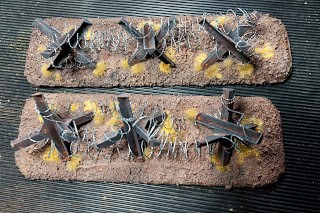 Barbed wire from Games Workshop. It's not the most realistic one out there but I had two rolls of it that needed to be used for something.

Now some pigmenting. Some Aged Rust and Light Rust to the hedgehogs and the barbed wire. Mud and earth pigments here and there on the bases. I also added some black soot to the hedgehogs to represent bullets or shrapnel hitting them. In this stage I drybrushed the static grass a little as well. 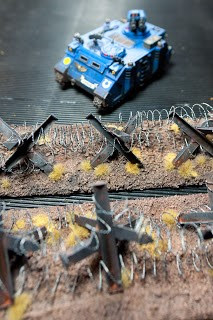 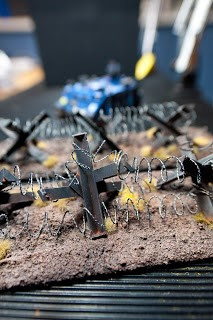 I hope you liked this short tutorial, I sure liked writing it!