Getting to the Point: Hail Caesar Army List Review

This is the first of many planned supplements for the popular Hail Caesar ancient rules from Warlord Games.

Getting to the Point: Hail Caesar Army List Review
By: Rabbits In My Basement (Apart Of TalkWargaming Network) 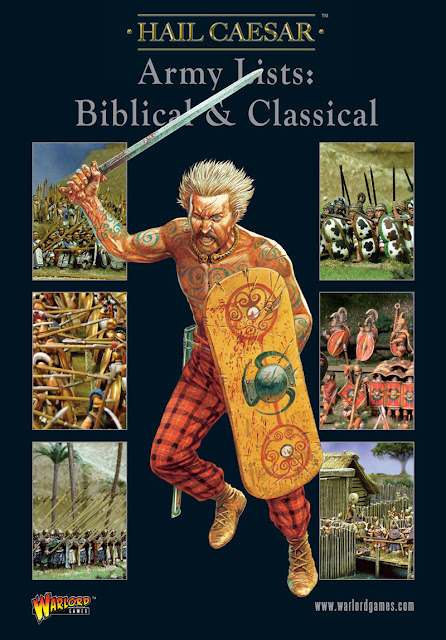 Initially, army lists weren't even planned because Hail Caesar was being promoted as a scenario driven, fun set of rules, rather than the list heavy, points driven tournament oriented sets of rules that have dominated ancient gaming for so many decades. I argued against lists and points myself on this very blog and the HC Yahoo group. But there is a market for them and anyone trying to make their living out of selling wargames would be stupid not to listen when a groundswell of 'we want army lists!' appears on the Internet. I have to admit that army lists do make life easier for the novice. Ancient gaming can be awfully confusing with all those unpronounceable Latin and Greek words.

This book is a good start. It's cheaper than the core rules, paperback and thinner with fewer colour pictures. But there is lots of meat; there are 63 army lists ranging from the Biblical era (Old Kingdom Egypt 30th cent. BC) to the Early Roman Empire (2nd cent. AD). The lists all follow the same format; a one paragraph introduction describing the army and any special rules or thoughts behind it, a list of key words to guide Internet searches for more information, composition guidelines prescribing how much of each troop type one can field and then the table of troop values. This is like the tables given in the Hail Caesar rules but with the addition of a points value.

The lists are not intended to be definitive or binding, but only to give a common starting point for quick pick up games. The troop values also provide excellent examples of how the game designers interpret the various types of warriors who march across the pages of ancient history. The composition guidelines are the core of the list by using percentage proportions to keep a reasonable balance between the different arms. Upper limits on special troops are indicated in the table of troop values, most are limited to one unit only.

So let's try and set up an army. I'll go with Marian Romans, since I know that army reasonably well.

I'll start with what I think of as my basic 'legion', 5 units of legionaries at 32 points each. I'm going to add two small units of skirmishers, one with slings (12 pts) and one with javelins (11 pts). The commander is free. That makes my first Division 183 points.

I'm going add a second veteran legion (up to half my legions can be veteran), 5 units again at 35 points. They will be supported by some Balearic slingers and Cretan archers. Both of these are limited to one unit each and get the 'marksman' special rule. They are 13 points each. This legion and supports is 201 points. In either division I could have fielded only 2 legionary units, or increased the skirmishers to 5 units.

I have 14 units already, so I could add 3 units of cavalry; German, Gallic or Spanish mediums or Numidian lights. 10 of those units are legionaries so I can add up to 10 units of allied Spanish or German or Gallic warbands if I wanted (although I'd go with more legionaries) or reinforce the cavalry with some light infantry. I can also field 3 artillery pieces. Of course by increasing the infantry I can now increase the cavalry too.

In the list there are provisions for 'Spanish' legions who may have fought in a looser formation. So one could easily use these and the options for Spanish warband, cavalry and skirmisher auxiliaries to build an army for Sertorious' Spanish rebellion or the Pompeian forces encountered by Caesar in Spain during the Civil War.

To flip back a few pages to the Spanish list (my other classical army):
Infantry 75%+ at least three quarters of the units in the army must be infantry other than skirmishers
Scutari at least 25% of infantry
Cavalry up to 25%
Division 4+ units
Skirmishers per division 50% of infantry

So I need some Scutari obviously. Let's start with them. 4 units with the heavy throwing spear option (26 pts each) and then 2 units of skirmishing javelinmen (11 each). 126 points total.

Another division of these fellows but with some slingers (all with the 'marksmen' upgrade) comes to 130 points. I could make one of these my commander-in-chief's division and upgrade his bodyguard to 'fantic and tough fighters' for an extra 4 points.

I can add in a division of Celtiberian allies. Their high clash and the 'wild fighter' rule would make them useful for punching a hole in the Roman lines. 4 warbands at 27 points each. Supported by 2 units of slingers at 13 points each (I have a lot of slingers in my Spanish army), 134 points.

That's a tidy little army for around 500 points. The Romans are already at 380 points and they haven't even chosen the cavalry yet. The legate will have some tough decisions to make.

Not that a real legate got to make those choices, he had to fight with what he had available. However, by paying attention to the army composition guidelines some reasonably balanced and historical armies can be put together for quick games. This book will also be a useful guide for a novice who wants to assemble an army and doesn't have a very clear idea of how much of each troop type to get. For quick games in the basement of rabbits we've just been using the basic stats and troop values given in the scenarios, which is a bit limiting. However, despite my best intentions my time is limited too, so using the pre-done army lists in the book will help my group play our games with less fuss, even if we don't use the points values. So all in all, and despite my initial misgivings, I think this book will be a very handy tome in the future and I'm already looking forward to the late antiquity and medieval army list book.