A couple of months ago, I visited my favourite FLGS (Friendly Local Gaming Store) for a 600 point game of Bolt Action. This time, we played a game of British vs Germans, and Aaron took the role of my opponent. 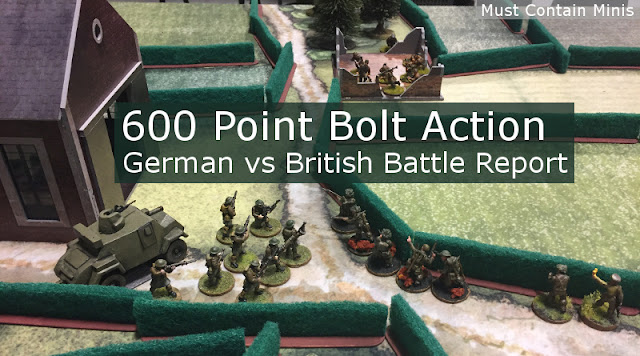 Sign up HERE to receive our weekly curated news and hobby content sent through our newsletter every Friday!

In our last game, Aaron suffered a devastating loss despite having two tanks on the table. Will he suffer the same fate when we engage with smaller forces? Read on to find out!
The Battle Board
We set the board before rolling for the scenario. Below is a look at the gaming table. 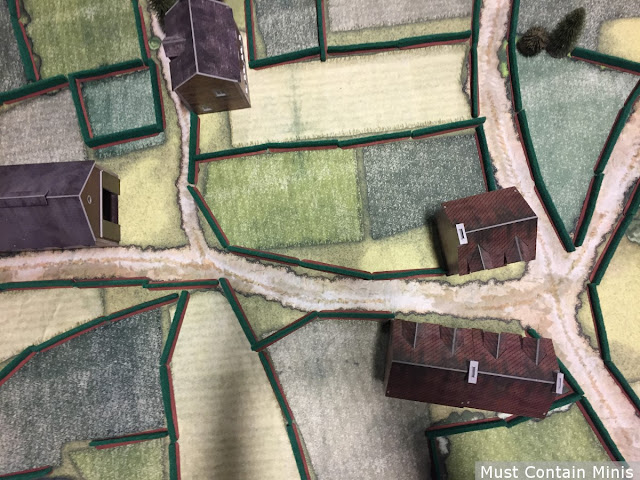 Our battle board for a 600 point game of Bolt Action. The Hedges count as light cover and we didn’t bother with rough ground.

We rolled for a mission and came up with a “Meeting Engagement.” Aaron chose the side of the board closest to him as his side.
The German Forces

Aaron brought the following to this 600 point battle – one Panzer IV, two 8 man squads (each with an LMG) and a First Lieutenant with one helper.

The German forces consisted of a Panzer IV, two 8 man squads and a First Lieutenant with his aid.

For the first wave, Aaron brought on the Panzer IV and one eight man squad. The First Lieutenant and second eight man squad would arrive on the second turn.
The British Forces

As the British player, I brought along an elite and highly mobile force consisting of 2 five-man squads (each with 3 SMGs), an eight-man Commando squad (armed with one Bren gun, anti-tank grenades and two SMGs), A Bren Carrier (as a transport), An Otter Armoured Car, a Forward Observer and a First Lieutenant with a helper. My entire force is rated as veteran except for the Forward Observer. While Aaron’s forces were in stronger units, the Brits had the advantage in numbers of dice. 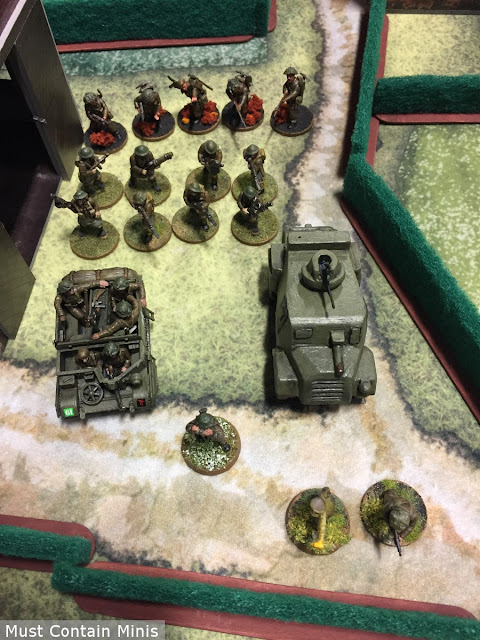 My force contained 2 five-man squads (each with 3 SMGs), an eight-man Commando squad (armed with one Bren gun, Anti-tank grenades and two SMGs), A Bren Carrier (as a transport), An Otter Armoured Car, a Forward Observer and a First Lieutenant with a helper. One of the five-men squads is not pictured here because they are “mounted” in the Bren Carrier.

This is the second five-man squad. They are “mounted” in the Bren Carrier. 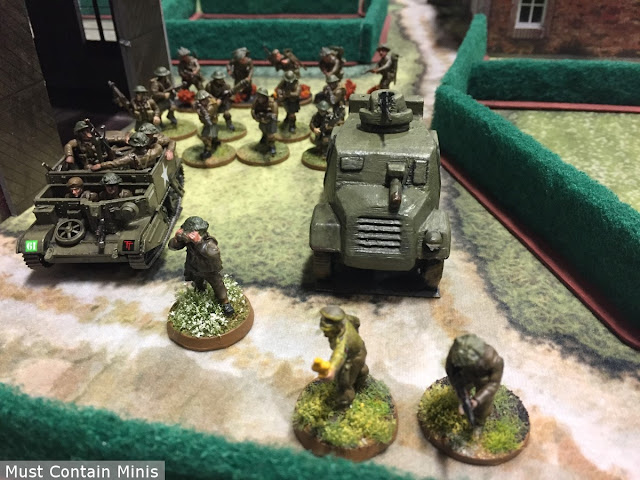 An eye level shot of the British forces advancing on the German army.

For my first wave, I chose to field one-five man squad, the Forward Observer, and the eight-man Commando Squad.
The Basic Strategy

The British came to the battle with the plan to be aggressive towards the German Infantry while either ignoring or avoiding the Panzer IV. As far as their ability to threaten the tank, the British did not bring much. They loaded the 8 man commando squad with anti-tank grenades, brought one anti-tank rifle on the Otter, and they might get lucky with their Forward Observer. Nothing else in the group could pose a viable threat to the Panzer.
The German player didn’t share his strategy with me, but he approached the battle much more cautiously than me. As much as he could, the Germans would rely on the tank’s long range of fire and their larger squad sizes by forcing the British to come to them.
Turn One
Being that the game is a “Meeting Engagement,” the board starts clear. 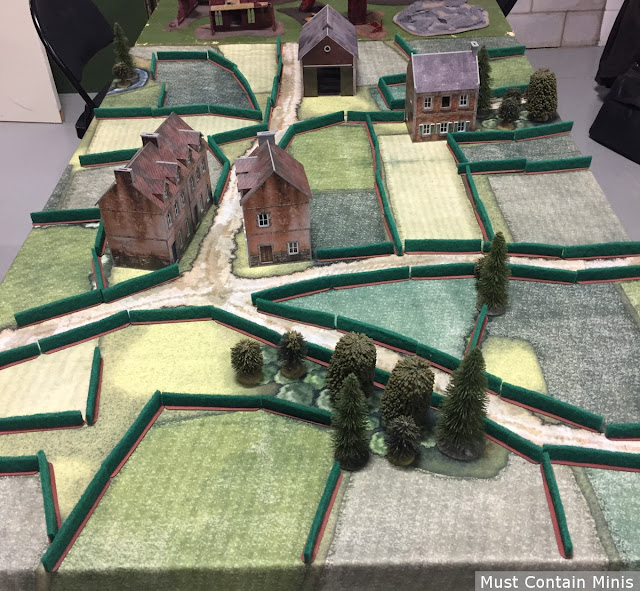 There is a lot of light cover on this table! The British will enter the table from the left while the Germans entered from the right.

By the end of the first round, the battlefield looked as follows. 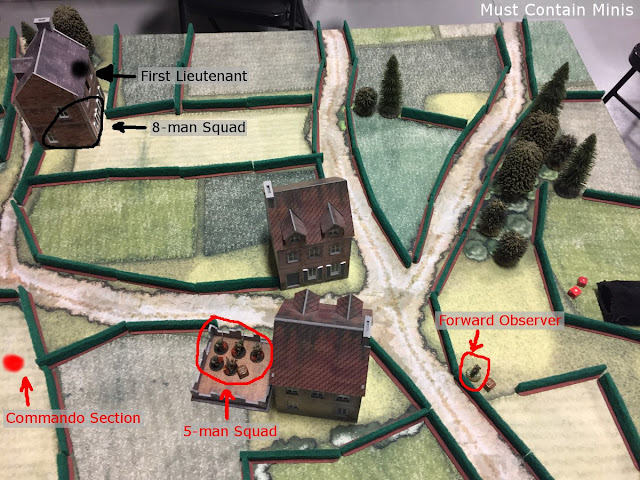 Above is the position of the units after the end of the first round. No shots fired. The Germans are at the top of the board while the British are along the bottom.

Turn Two
On turn two, the reinforcements enter the board. The British cautiously bring an Otter down the road while the Germans bring the Panzer IV on the board and fire its main gun at the Commando section running up the battlefield. 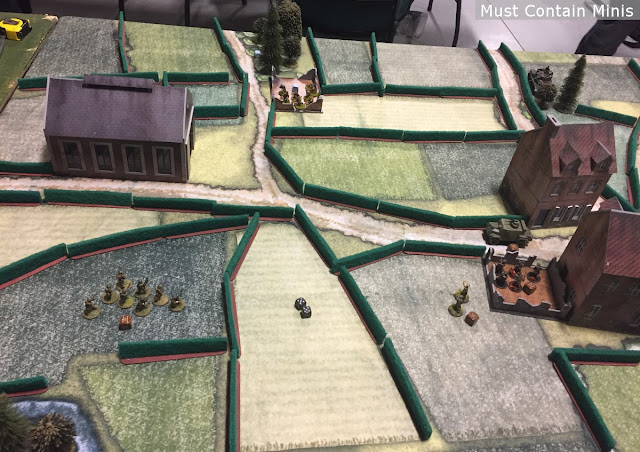 The battle table at the end of the second turn. No casualties yet, but the tank has my boys attention and there is not much I can do against it!

Turn Three
Seeing that the Germans fielded a tank the the British could do little against, they decided to saturate the field with targets for the tank to focus upon. 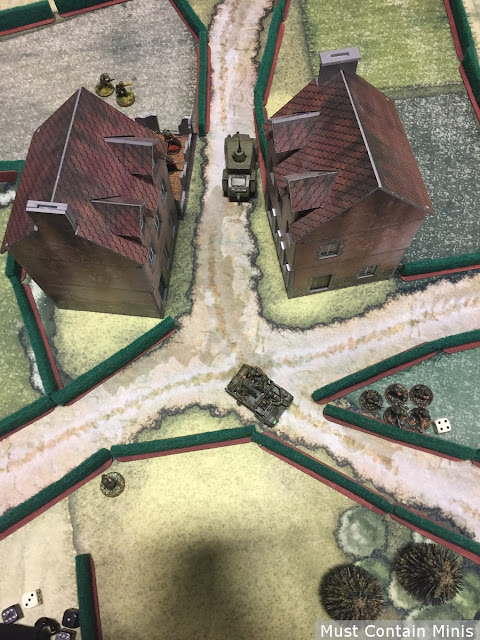 The British Universal Carrier drops its load of soldiers near the tank. On the other side of the board all of my infantry continue to advance along with the Otter. Finally, the artillery observer called in his bombardment on the Panzer IV this round. 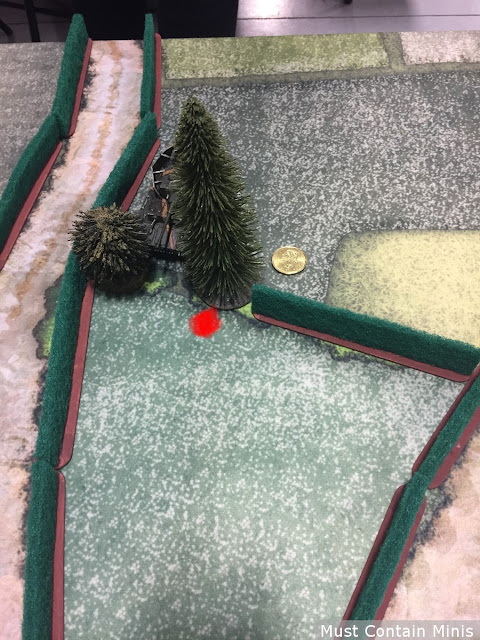 The coin is where I called in the strike, but I am wondering if I should have called it in where that red mark is due to line-of-site. Regardless, the detail would not have made a difference in the game.

Turn Four
At the top of turn four, the bombardment came in and made a super lucky hit! The tank suffered a penetrating hit and became immobilized.
With the Panzer IV immobilized, the British rush towards the German soldiers hiding in the house. The German troops fire at the advancing troops but are overwhelmed by sheer numbers. 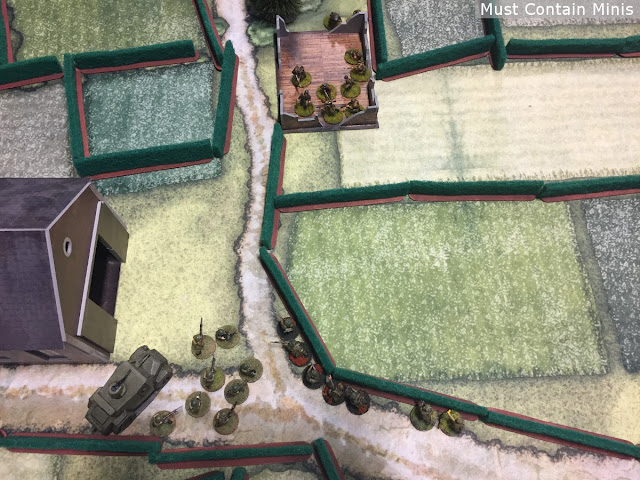 The charge towards the house while the Otter provides covering fire.

Meanwhile, the immobilized Panzer IV concentrates fire on the five-man squad advancing on its position and nearly wipes out the unit. 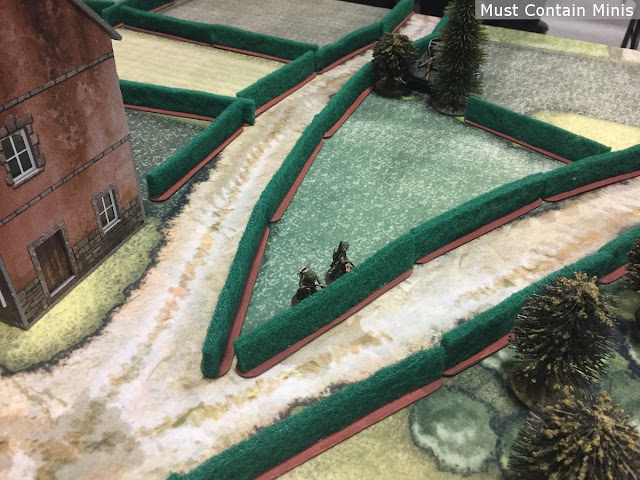 Taking from a coax machine gun and hull machine gun on the Panzer IV, the British group is lucky to suffer just three casualties. The two remaining soldiers pass their moral test and stick in the fight. Unseen here in the picture above, the Forward Observer jumps into the Universal Carrier and mans a machine gun.

Turn Five
The British continue to press towards the enemy with everything they have. 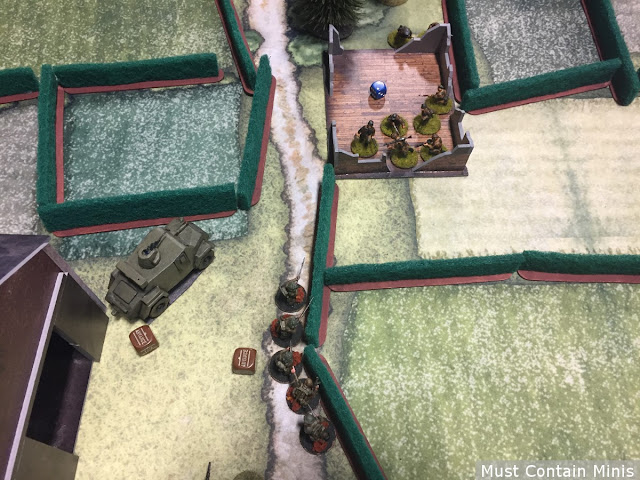 The British forces advance towards the house and attempt to pin down the German forces hiding inside.

Knowing their end is near if they stay put, the Germans in the house flee. Their first lieutenant follows them. 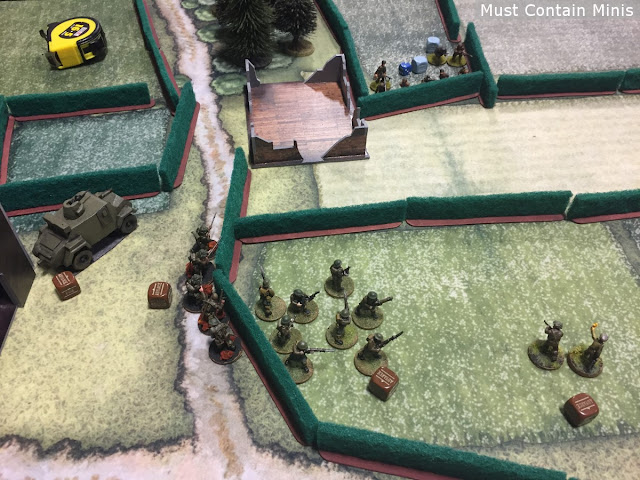 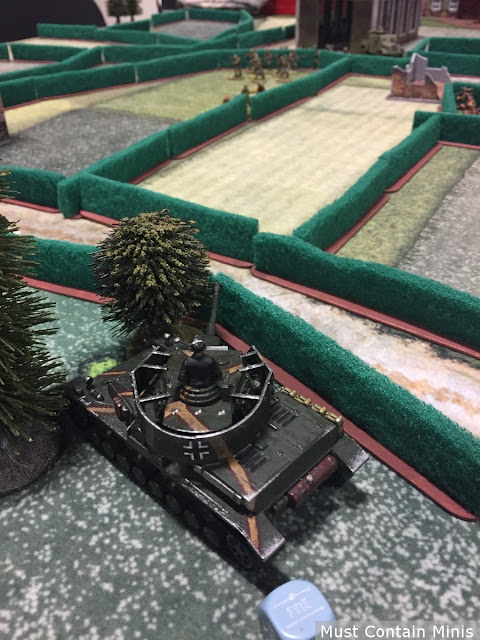 That main gun shot takes out my First Lieutenant and his aid. This is the first casualty of the game.

Turn Six
At this point, the score is in favour of the Germans – one to none. The British push forward to change that advantage. 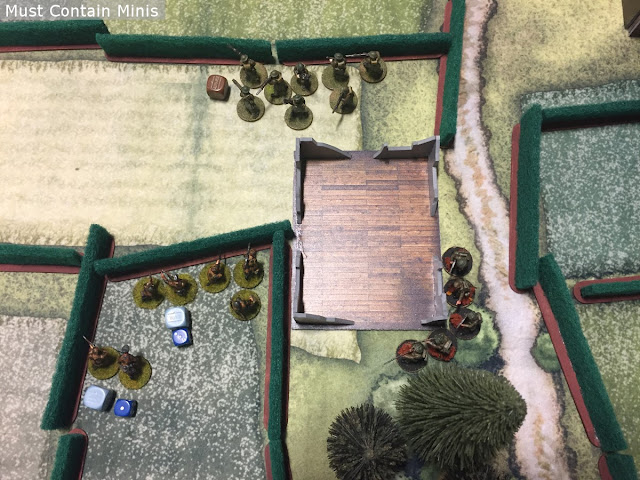 The 5-man squad flanks the enemy while the Commandos prepare to charge the line.

On the opposite side of the board the German Infantry try to take out what was left of the British 5-man squad and fail.
The score is still 1 to 0 for the Germans. If the game were to end now, the game would be considered a “draw” because one side has to kill two more units than the other side. We rolled to see if there would be a turn seven. There would be!!!
Turn Seven
The British close in and assault the German defenders as quickly as they can. 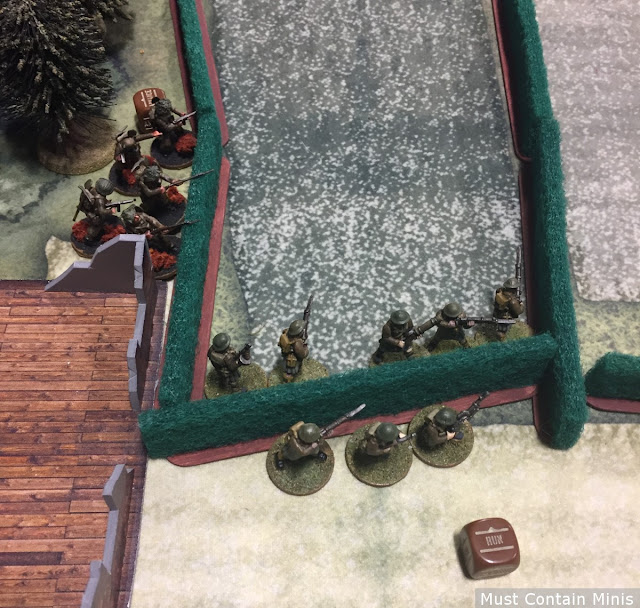 The Commandos assault the line and are lucky enough not to take any casualties, yet they manage to wipe out the entire German unit.

The five-man squad performing the flanking maneuver with the Commandos take out the German First Lieutenant through a hail bullet fire. 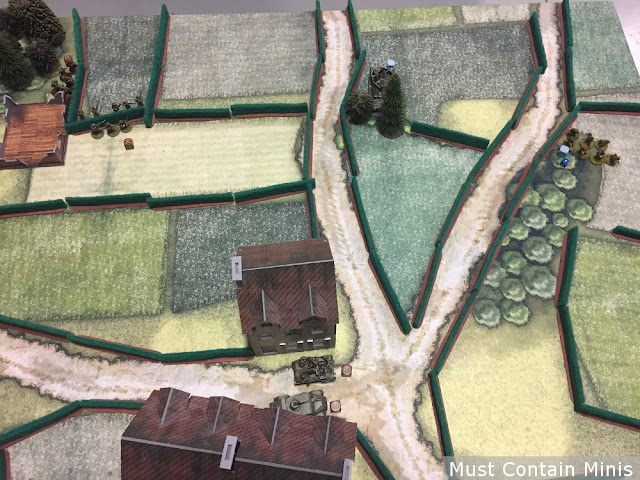 The British stand victorious over the German Infantry that once defended that field.
Meanwhile, the Otter hightails it down the road and hides from the tank (denying an easy target).
Unfortunately, I moved my other 5-man squad (now a 2 man squad) back into view of the Panzer IV. They go down in a fury of bullets from the tank’s coax gun. 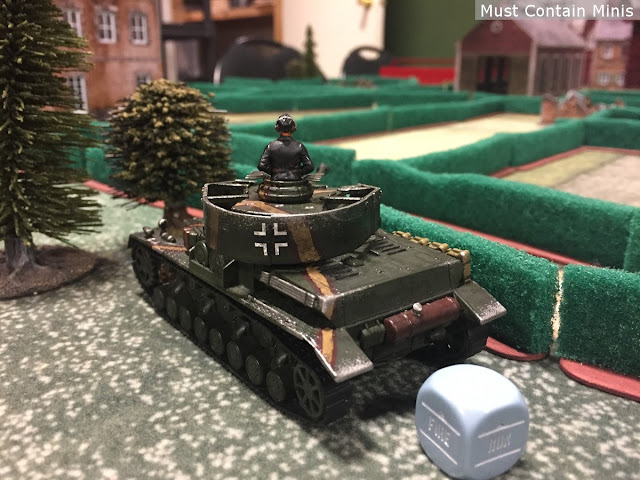 Above is how the battle ended. The two British vehicles hid behind the house for the last turn to deny the tank an easy kill. The Panzer IV eliminates what was left of the 5-man squad on the right hand side of the board. All that remains of the German units is an immobilized tank and seven infantry men.
It’s a Draw!!!
Although the British Army caused more casualties than the Germans, the game ends in a draw. Both sides lost two units each. Overall, not a bad game at all. We both had lots of fun and I am sure Aaron feels somewhat redeemed after his devastating defeat in the last game.
Eye Candy 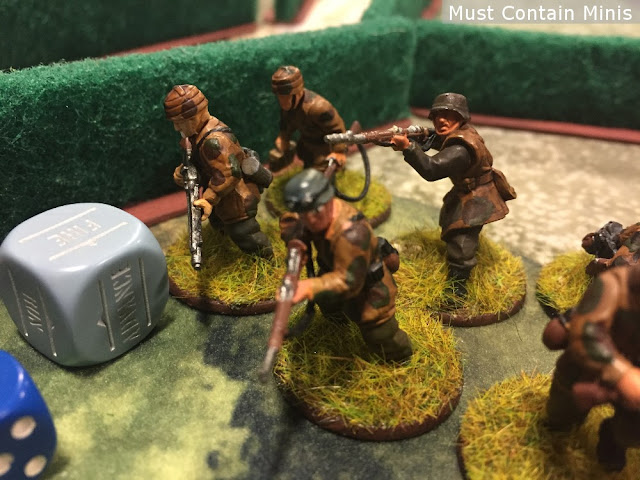 I like Aaron’s tank so much, I had to show a close up of it twice. This is the Panzer on turn two firing at my Commando section with its main gun. He missed! 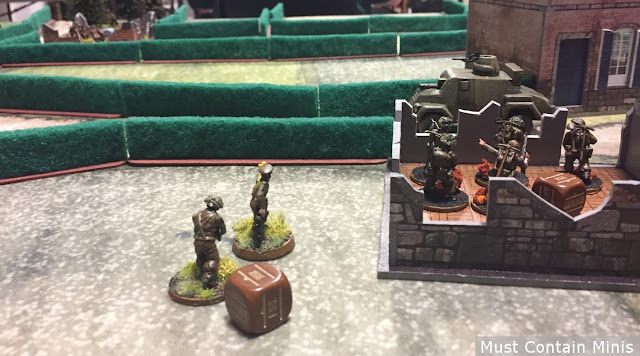 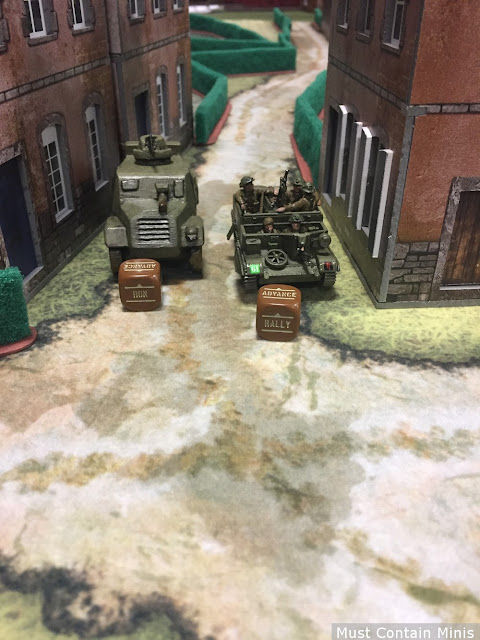 The British Troops advancing early in the game. The five-man squad looks like they are in ruins, but they are in a house. The top lifts off to place figures on the main floor of these buildings and that main floor is skinned as ruins. We left the top off so we wouldn’t lose track of the models.

The British lightly armoured vehicles hide from the Panzer’s line-of-site on the last turn.

Sign up HERE to receive our weekly curated news and hobby content sent through our newsletter every Friday!