By: A League Of Ordinary Gamers
Link To Blog: 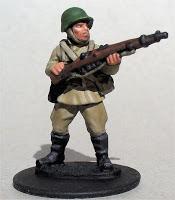 I think we all can agree that

uniforms for the Western Allies

and Germany is far easier than

it is for the Soviet Union.

It seems that ever since the

war ended most people have

three armies than the Soviets,

perhaps because the Soviets had been more an

"enemy of my enemy," as witnessed

by the ensuing Cold War.

How many WWII movies are

How many are about the other Allies?

I rest my case.

who are unfamiliar with the Red Army

can have a tricky time sifting through the

sites trying to figure our how

to paint our figures and understand

how the Soviet army operated.

In January 2011, when I began examining

my Black Tree Design Soviet figures and then

researching the uniforms, I quickly discovered

that the original sculptor for most of the line,

Nick Collier, was a fanatic for detail.

I'm sure he sculpted just about every

My head felt like it was going to explode!

Do It For The Gamers!
In order to make life a bit easier for the

scattered notes before I lose them, I

decided to begin writing this series of

articles about spotting and painting Soviet

uniforms. I'm not sure how long

it will take me to complete

Part 1 has taken me over seven hours to write.

Though my focus will be on painting my BTD

figures, you can use these articles regardless

of the scale you're gaming or

the figure manufacturer you're using.

Okay, let's get this thing started!

Some Background on
Soviet Ranks Being Abolished
W
henever a revolution takes place,

it seems as if the new powers-that

-be always want to make their own
mark on the military,

expunging remnants of the previous regime.

No where was this more dramatically

the Soviet Union after the revolution

For example, throughout the

all military and civil ranks, along with

their privileges and honors.

How could an army operate effectively

without its command hierarchy

No one had thought of that little detail.

By 1935 the failed experiment ended.

Officers, but not generals, had their titles

along with new, military-looking uniforms.

Various branches of the armed forces,

such as air and armor, began

getting their own uniform patterns.

By May 1940, all rank titles had been restored,

along with parade and undress uniforms.

All this occurred just in time for Operation Barbarossa,

the German invasion of the Soviet Union

Ranks Restored
and a New Uniform: M35
For those gaming Soviets in World War II,

there are two basic uniform styles, along with

variations of each style.

The earliest uniform is the M35 pattern,

though it didn't see wide distribution until

early 1936. This is the pattern reintroducing ranks

into the Red Army. Based upon the traditional

this Soviet uniform was both simple and,

from what I have read, more comfortable than the

traditional uniforms of the Western Allies.

with the M43 pattern. I'll try to explain

some of the spotting features of the M35 and M43 patterns

along with variations so that gamers can

accurately paint and spot them.

We'll begin by exploring the uniform's

tunic, called a "gimnasterka" in Russian.

that both have significantly different

To the left, you can see a photo of an M35 collar.

This is a traditional fold-down color

buttoned at the top.

The top photo shows how the newly restored

ranks were displayed by placing

an insignia (patch) on the collar.


Each branch of the military had its

though, had different piping colors from

enlisted men.  Each branch also had its

own brass badge on the

upper-end of the patch. For example,

(aka Red Army Trooper), whose insignia

is raspberry for the infantry, trimmed

with black piping for enlisted men,

and topped with brass crossed rifles on

a target for the infantry. Armored troops,

for example, had black facings on their

insignia, trimmed with red piping, with a brass tank,

Insignia Guides at the bottom

other branches and ranks in the military. 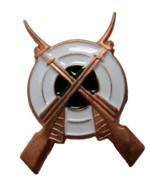 colors and trim on their insignia until

they were replaced with subdued insignia,

as seen on the lower photo. The subdued

for each branch, but the facing color

was changed to a darker drab green.

Gone was the piping trim.

This lasted until the introduction

If your games take place from 1941

onward, as they most likely will,

most of your soldiers wearing the

M35 uniform should have subdued insignia.

Since the Soviets often were slow to reissue

uniforms earlier in the war, you could still

have a very few soldiers wearing the

I painted all my M35 uniforms with

However, I had very few BTD figures

where I could actually see the M35 collar.

In the photo to the left, you can

are wearing the M35 uniform.

Every figure wearing this uniform pattern in

my collection has most of its

collar blocked by either a strap, chin,

When I had to paint the subdued insignia,

the figure usually was wearing

Ranks and
The M43 Uniform 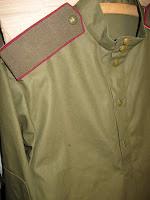 appears to radically change the

However, and quite ironically,

the M43 returns to the way ranks

were displayed in the

The collar on the M43 also returns to a more

The boards on infantry uniforms are the

colors as the earlier insignia, such as

raspberry for the infantry.

When painting the piping, notice that it

does not cover the edge along the shoulder.

It only covers the two outer edges and

the edge along the neck.

The button at the top of the shoulder board

is the same color as the rest of the buttons

on the tunic. The branch badge

will go next to the button toward the shoulder.

(The photo to the left doesn't show this,

but the insignia guides below do.)

identify ranks, such as corporals

Though shoulder boards were reintroduced

uniforms still in use,

adding the shoulder boards to them.

If you look at Black Tree Design's

Soviets, you'll notice that some of

them are wearing the M35 with shoulder boards.

As a result. any figure with shoulder

boards won't be accurate for battles

prior to the introduction of the M43 uniform.

Luckily, I'm not much of a stickler

for such detailed authenticity in my gaming,

preferring to have fun instead of creating

museum dioramas. I only have some

much money to spend and

time to devote to painting.

Though I mention the branch badges,

I haven't painted any of them

on my figures--the badges are just too

small to paint, looking more like blobs than crossed

rifles on a target.

Rank & Insignia Guides
I don't remember where I got the guides

below, but I have found them to be very useful

for painting my Soviet infantry, most of

whom are lowly Red Army Troopers. 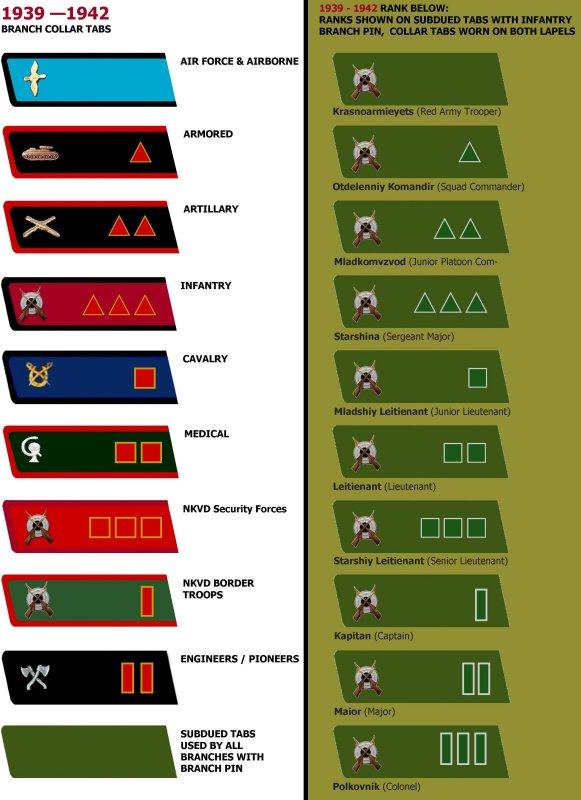 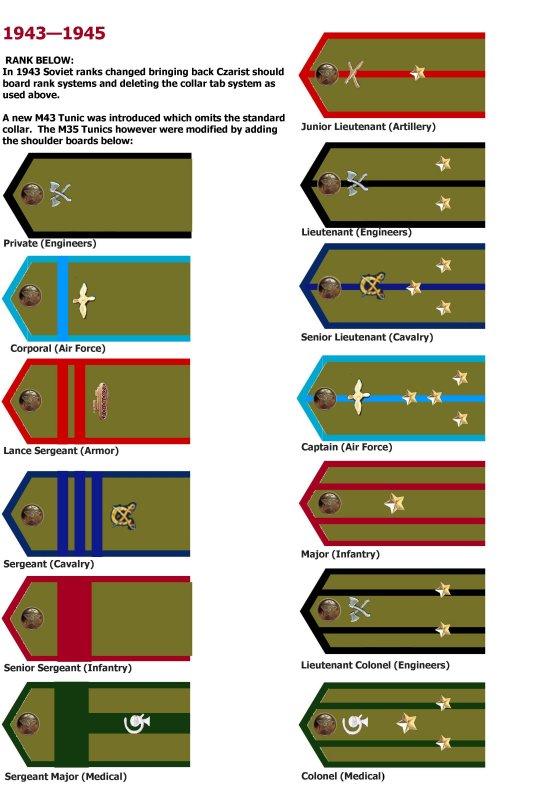 Future Articles
in the Series
In Part II, we'll look at more spotting

difference between the M35 and

from a gamer's perspective,

and painting the tunics. In future installments,

I also want to cover

trousers and boots, along

with an assortment of straps, gear,

and then weaponry. We'll also

look at the winter uniforms. Of course,

this will all take time, so please be patient.

Well, I hope you have enjoyed this first

installment of the series and find it

useful. And to think

that I still have to paint my officers,

more--and then write those articles!


(*Disclaimer* we by no means own

through our platform for

wargamers to enjoy and learn*)
By TalkWargaming