One of the major points I try to tell

people when the "I wanna airbrush,

what airbrush should I get?"-question
pops up is that the cheap ones you
see for €50 seldom is a good choice

since you run the risk of getting a lemon.

And once you bend a needle or loose

a seal you have to get a new one instead

of just replacing a part. (Yes, I know there

are some knockoffs that have their lineage


The problem is that you then have to get

Until a couple of months ago when the Neo

(let's just call it Neo from now on even though

it's an Neo for Iwata) arrived on the scene.


Built in Korea apparently, but with Iwata

specs, which kinda makes it a less quality

So I'm not really up to spec with how Iwata

airbrushes work. But I needed another airbrush

for spraying on primer, varnishes and general

basecoating. The 0.15 nozzle on the Infinity

too lazy to change needle every now and then.

Perfect excuse for getting myself a Neo!


THE SPECS
Built in Korea or whatever. 0.35mm nozzle

(more on that later), exchangeable cups on the CN

Read more over at Iwata/Medea. 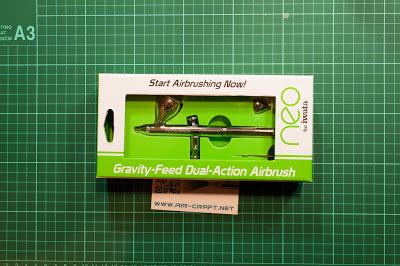 when you see the packaging. No fancy (fake)

It even has a hole for a hanger!


In the box there is a small paint cup and

a tool for removing the nozzle. 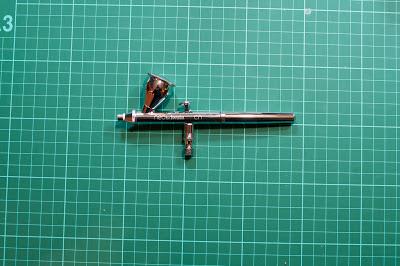 Out of the packaging it's, to my surprise,

So let's take it apart! 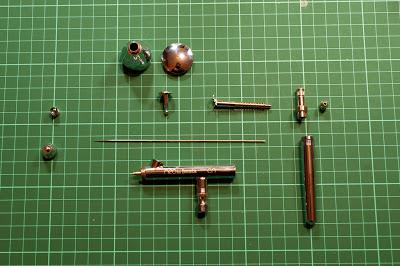 If you look carefully you can see my ugly

mug on the paint cup lid! I opted not to

remove the nozzle since it needed a tool

(included) and other reviews said that it

was fitted in the workshop and shouldn't be

removed unless you really need to.

Knowing me I would break it if I tried,

so I left it alone.


One thing that I really liked was that

the paint cups have their o-rings on the

cups instead of on the airbrush body, like the

H&S. This means that there will be less gunk

to clean out of the o-rings, and hopefully less

replacing of o-rings that have gone bad.


After re-assembling the airbrush I sprayed

some cleaner through it and loaded it up

with some VMA Black Primer. I wont show

you the results, but the 0.35mm nozzle

produces about the same width lines as

The 0.15mm nozzle on my Infinity makes

thinner lines (of course) but not that much

for any beginner out there. It should be able

to handle everything but the smallest of small details.

I have put it through it's paces. Since I have

a bunch of Necron flyers to paint I guess that

will be the real test for the Neo. :)


(*Disclaimer* we by no means own
any of this content as it is owned by
it’s credited authors, our goal is to only
showcase the content through our
platform for wargamers to enjoy and learn)