In Age of Sigmar, due to the changes of combat order, we are able to manipulate the number and composition of combats to suit our needs. Based on the turn-taking of which unit strikes first, since there is no initiative, there are certain situations that favor one player over another. If you can manipulate the field into providing you with the power in these situations rather than your opponent, you're more likely to win these combats and thus the game. Make sure to check out our other tactics articles for more info once you're done here.


The first situation is simple enough: you want an odd number of combats, each combat one-on-one for units, and you go first as it is your turn. The most basic way to ensure this is only charging one unit, so that there is a lone combat and you have first strike. Alternatively, you can have three combats, you go, they go, alternating but you get first strike and they get the last after whatever unit is depleted. These may only give you a minor edge but it can be the difference across enough rounds of combat to win you the game.


Remember you can always retreat from combat in your movement phase. If you choose to use this, you will deal less damage but can ensure that you are in an odd number of combats during your turn, giving you the first strike and giving you the striking advantage for the round.

Another way to create favorable combats in AoS is the situation where you are 'focus firing' and have several units fighting one or two of theirs, giving you plenty of unanswered attacks and the rest of their army stranded with nobody to punch all the way across the board. This will limit the damage you take in the round while maximizing the damage (and hopefully battleshock) you can inflict on a subset of their army. Divide and Conquer is the name of the game. 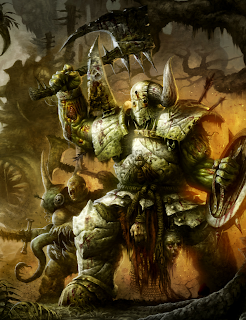 Matching units up based on their strengths and weaknesses is another option, but it will require you to know all the rules associated with both armies and some skillful outmaneuvering of your opponent's force. The simplest expression of this is to have rending attacks against good armor saves so that the rend is not wasted, and so that your non rending attacks can be more effective against squishier targets, but there are special rules that can be useful. Some models do best when outnumbered, or fighting a monster or hero model. Some units may perform better or worse against units with certain keywords, and making sure to protect your models from those effects while letting yours come into play against the enemy will be a matter of practice and experience, but can certainly give you a competitive advantage once mastered.

How to you try to manage your combats to make the most of your force?
By Unknown