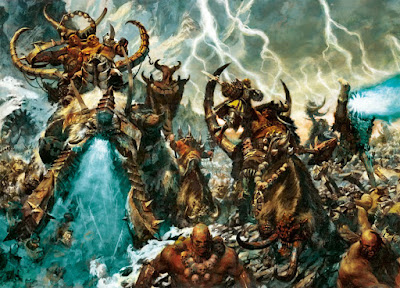 The talk of the town in Age of Sigmar at the moment is that Ogres (and by association, other multi-wound and multiple damage units) are top-tier and will remain so until there are updates to the rules or warscrolls, or a comp system is established that will limit their power. Even with many comp systems that are currently being used in various formats, people are simply having a hard time overcoming the threat presented by these 'tank' units in both Ogre Kingdoms lists and elsewhere. Think of Kroxigors, Minotaurs, Retributors, Morghasts, and others. Three models of Minotaurs are not worth the same as three models of Gors - 12 wounds (three models) of minotaurs aren't seemingly even with 12 units (12 models) of Gors or even Bestigor, because the multiple wounds they each have and the multiples of damage they can toss onto enemies make them disproportionately effective. 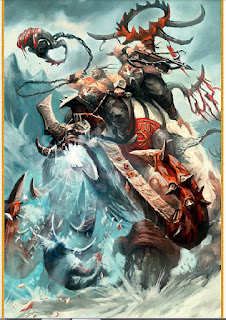 Multiple Wounds
Let's glance at the advantages provided to a model with multiple wounds: They are capable of taking damage without losing models (for a time), meaning that their offensive output is not diminished immediately following an enemy attack. Even with balancing for wounds per side, a model with three wounds will likely be worth more than three one wound models, since he can keep fighting at full strength despite losing a wound while the three models would be come 2/3 as effective. Multiwound models also have an advantage over their single-wound counterparts in resistance to battleshock. You need to actually lose a model to trigger a battleshock test, and you probably need to lose a few to actually fail one if the bravery of the model in question is decent. This means you need to dump in several wounds (that pass the armor of the unit!) to kill enough to hope to have a few more models flee. Of course, should you succeed in causing battleshock on a multiwound unit, each fleeing model strips more wounds off of the unit when compared to standard infantry, so there is some hope there. Despite this, multiwound models are innately more resilient to battleshock and damage in general.


Observing the benefits of models that deal multiple wounds paints a picture of a unit that is scary for altogether different reasons. A model that does 2, d3, 3, or even d6 damage can be incredibly powerful when combating things like heroes, monsters, or other multiwound models. Even if you are only hitting and wounding on 4+'s without rend, eventually one of those is going to get through and the target is going to feel the pain in the form of multiple wounds. 3 or more kroxigor swinging their axes and clubs for multiple attacks each dishing out multiple damage per strike is more than enough to fell your general if you don't have a special ability to deflect some of that carnage. Additionally, when facing hordes or units of standard troops, dealing 3 damage per successful attack could kill three one wound units rather than overkilling a single model, so not only can greataxes and other large weapons fell giants and the like, but they can also reap scores of wounds from your rank and file, scything down your infantry without much trouble. 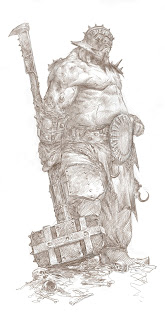 To top off the horror: these are innate benefits of the model's statline and are usually not dependent on synergies or supporting units/heroes to make them effective. This means, straight out of the box, these units are hard hitting and tough, and you won't be able to snipe out their supporting units to debuff them; they're just built like that, unfortunately. Not to say somebody couldn't also soup them up with some mystic shield or other magic/command abilities, but they will be a nightmare to face regardless.

When you find yourself facing a unit (or Sigmar forbid, multiple units or even full armies) of these multiwould, multidamage models, you are in for a rough ride. If you have the ability and the boldness to field such a force, then by all means, go forth and conquer, but for those of us facing such beasts we will need to develop methods for fighting them off. This will vary depending o nthe army you play, but it is a wise idea to look for a strategy you can employ for whenever you inevitably face off against a stacked ogre list or something comparable. The best way to beat them seems to be forcing battleshock, since (though you need to kill enough to make them flee) each point they fail a battleshock by makes them lose a model, NOT a wound, so you could make a great many wounds run from the table with a good battleshock roll. Try focus fire on a unit and finding ways to apply bravery or battleshock modifiers to assist in thinning an ogre unit. Alternatively, you could simply feed them chaff or try to find ways to interrupt their movement and keep them away from the places you need to go, but if you're up against enough ironguts, it is unlikely this will work for long. you also could fight fire with fire and bring your own multiwound models, but besides those it seems like you're in a pretty tight space when facing off against an Ogre Kingdoms army or anything that performs similar battlefield functions.

How have you handled multiwound models? What combinations have you found most effective? Are you enjoying using your ogres to smash your opponents, or have you had any experience going up against them? We want to hear about it - let us know in the comments! 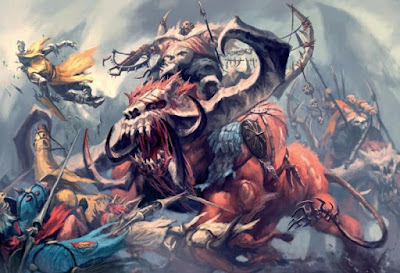