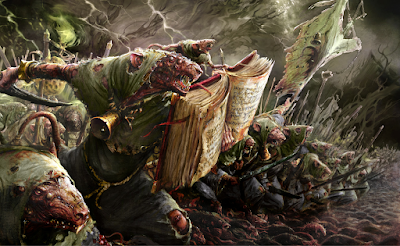 It's too easy to disregard a model or unit because you see only the regular stats. If you don't like the armor save on a model, or think it doesn't have good enough to hit rolls for example, then you might throw it in the bin. However, many units hide important information in the special rules section that make them unique and often quite worth using.

I thought Gors were pretty soft and not worth my time, until I realized that with a musician, standard bearer, and champion, the unit can move, run, and charge in the same turn which really increases their threat bubble. They might be a touch weak in actual fighting, but they can get into the combats you want, where you want, when you want them to, which may make them much more viable. Other things, like temple Guard increasing the armor save of nearby characters, can make a pretty good unit really excellent if you play your maneuvering well. Looking at the Temple Guard in a vacuum, you could ask yourself why you aren't taking kroxigor instead, or saurus cavalry, etc. Being able to capitalize on their synergistic effects can make them more valuable than they first appear. Things like this, hidden away in unit warscrolls, are all over the place in Age of Sigmar, and the commander savvy enough to identify what he or she has at hand and make use of it will have a better chance of victory for it.


There are plenty of examples to look for in any army that has so far been generated, and I'm sure that there will be more to come as more models and warscrolls are released. Notice how things synergize and really get to know the scrolls that you are going to take. A game may have been lost because you decided to use arcane bolt instead of a good and applicable spell that's unique to your caster, for example. Of course, none of this will happen if you don't actually read the warscrolls and plan ahead! Be sure to look over your army list and build with these concepts in mind. It's pretty unlikely that you'll fortuitously come across a special rule right when you need it in battle, but if it is in your head in advance, you will be more likely to make use of it in good time. 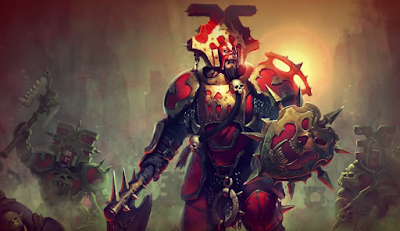 Not only do you need to be aware of the special rules you have, but it is helpful to understand how they interact with and modify the core ruleset as well. Take The Stormcast Eternals, for instance. The Lord Castellant has a special ability to bathe his fellows in light from his lantern and increase their save rolls by one, and it would seem useful to combine with Liberators, who already can reroll 1's with shields. However, some people think that this is worthless, since there would be no ones to reroll as the +1 would be added first, but this is not true. Liberators + Lord Castellant's buff does not negate the Liberator's Sigmarite Shield ability to reroll save rolls of 1. From page one of the rulebook:

"Some rules allow you to re-roll a dice roll, which means you get to roll some or all of the dice again. You can never re-roll a dice more than once, and re-rolls happen before modifiers to the roll (if any) are applied."

This means that you reroll based on what the die is showing first and then apply the +1 modifier from the Lord Castellant after the reroll. Some people might quickly scan the +1 buff and think it is better used elsewhere, but understanding how the rule in question fits within the scope of the four page rules means it actually is quite applicable. There are certainly other examples of this, and some will cause contention based on the ambiguity of the rules or the specific interpretation one player or another has, but on the whole you would be well served reading your warscrolls thoroughly and paying special attention to the Keywords, Special Rules, and synergies in addition to the core stats. 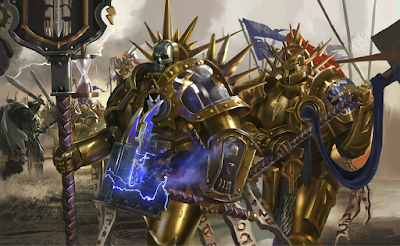