Editorial: What Do Chaos Space Marines Need to Become Better?

Rarkthor shares his thoughts on the Chaos Space Marines Rumors and possible changes to make CSM a top contender once again. 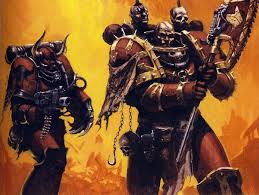 With some new Chaos Space Marines rumors now floating on the horizon, I have been thinking and discussing with friends about some possible revisions to the codex to help reinvigorate the archetypal villain of the 41st millennium. For those curious, here are the rumors. They are perhaps not as solid as other rumors, but they are definitely interesting regardless.


via The HairySorcerer20 on Bolter and Chainsword 8-21-2015: So the manager at my local GW got back from Nottingham a while ago. And couldn’t help but tell me theres talk of a new chaos codex coming this year at the HQ. I’ve known this guy for years. I’ve never been brought into the back of the shop and had him tell me. Then he mentioned horus heresy stuff in October apparently. I’ve scanned through the internet and found nothing on either. Although he seems like he really wants me to.expect something. I’ll ask him for more info tomorrow. Not too excited. But he isnt a liar. And heck, he’s coming to me about this as I’m essentially the biggest chaos fanboy at the shop.I’ll edit this post if some new info comes up. He said something about tau later in the year but I was too busy squabbling mindlessly about what could be changed. OH and apparently we are going to.be seeing a new deamon engine.. Joy.…He told me to keep £35 handy around the end of this month to the start of September.


I think that Chaos Space Marines are an important codex in the grand scheme of the game. In order to ensure that a hero is adequately challenged and made into an interesting character, the villain must also be as interesting, or perhaps of greater interest, than the hero. In the case of Warhammer 40,000, those heroes are the many servants of the Imperium and the primary villains are the many servants of Chaos. Some of Black Library's best works are coming out of the Horus Heresy novels, and many fans of the lore eat these novels up as fast as they possibly can.

The most disappointing part of the Chaos Space Marines codex, however, is the lack of competitive choices. Many of the choices are certainly good, but it just lacks that edge that it needs in order to really shine, especially compared to the recent Imperial releases.

In order to avoid the minutiae of points discrepancies and appropriate increases or decreases, I plan to focus on three major elements of the codex that may be the key ingredients to make this codex and the Marines worth playing again (I'm not looking for Codex: Cultists and Heldrakes, thanks.) 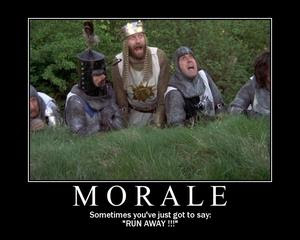 Have you ever had Chaos Marines run down in close combat? Have they ever failed a morale check and couldn't regroup automatically? I have seen this happen many times, and it is perhaps one of the most embarrassing parts of playing Chaos Space Marines. There are some options in terms of wargear and icons to give the Marines Fearless, but once that banner is dead, those Marines will run for their lives. And Leadership 10 from Veterans of the Long War doesn't always cut it either. In any event, Imperial Marines don't need extra wargear to automatically regroup and avoid being run down in combat... why should Chaos Space Marines? I don't necessarily think they need ATSKNF itself, but some sort of equivalent rule would be nice.

Ah, the beauty of Chaos and random charts. The Daemons codex and army are quite known for their huge list of charts and random rolls also feature this element of random effects. The biggest difference though is the immense nature of the challenge success chart. In a lot of ways, Champion of Chaos is just a bad rule. The chart is way too massive, and it applies to all characters. I think the solution here may be to limit this rule to Chaos Lords or other HQs. Not every Sergeant needs to challenge down Draigo to combat. A Chaos Lord, on the other hand, wouldn't dare to besmirch his honor. In most cases, being forced to challenge is a huge tactical disadvantage. If the rule is kept, then the Aspiring Champion should have some extra rule to aid them in winning challenges.  Black Templars have it, so it seems fair to me. 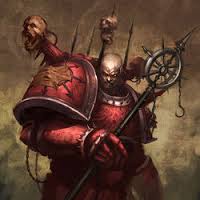 The most recent CSM codex has done an excellent job of exploring some of the non-cult troops options available to the Chaos Marines. The addition of units such as Warp Talons, Warpsmiths, and Dark Apostles really give players a few more options to represent various Legions on the battlefield. The issue though is one of list building though. In order to gain Chaos Marines better at assault, you most likely want Berserkers. But then you want a Khorne Lord in order to unlock the Cult Marines as Troop choices. It becomes a very awkward song and dance to translate the Legion ideas into working battlefield armies. There are so many depictions of Legion Troops and Renegades alike that feature skills and abilities above the normal level, but they do not involve any Marks or Icons. I think some added special rules to show Iron Warriors or Night Lords would really help the book competitively and thematically.

If these three changes were to made, I think the CSM book would be, if not a solid force to field, it would at least be fun and interesting. It wouldn't suffer in every way when compared to the Imperials.

What do you want to see in the next CSM book? What would bring you back into the folds of chaos? Or do you love your false emperor? Check out my blog at www.rarkthorshold.blogspot.com for more of my thoughts.