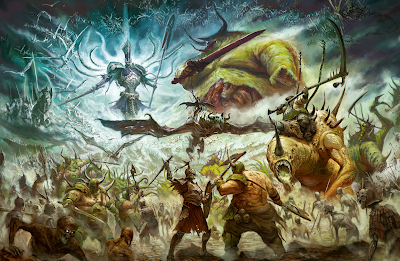 When Age of Sigmar was first announced and people got a hold of the rules, many people decried the perceived lack of balance and were looking around for a way to potentially make for a 'fair' fight. The general consensus took a minute to settle (as I'm sure many of you were aware) and multiple comp systems popped up to try and deal with the balance trouble and give us a semblance of how the game might run similarly to the fantasy of old. [If you're curious, take a look into some of the systems here or here.] One of the things we have come to at this point in our initial foray into Age of Sigmar is the idea that with the right scenario, there can be balance and an adequately competitive game. The recent big book has given us a few scenarios to play with, and some of them seem pretty fun and compelling like The Ritual. I personally don't think that a scenario has to be explicitly balanced for things to be fun and engaging in a narrative sense, but they certainly can be made to be so. One of the cool things about this limited ruleset (and really any tabletop game) is that you have the freedom to mess with the rules as you see fit and play whatever game you choose. If you're interested in building your own scenarios to try out either for a fun fluffy experience or as a balancing act for competitive play, here's a few categories you can try to build your own games around.

Move Somewhere (Or Block Them) 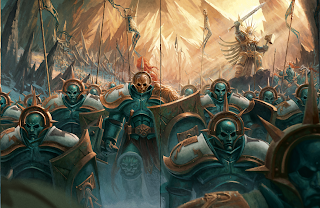 Some of the scenarios presented in the big book and presumably the books to come involve some sort of line-breaker effect, wherein you need to get your models off the edge of the board through the enemy cordon, or into their deployment zone, etc. These mission certainly have merit, though they may be imbalanced in some way or another if one player has really fast models, greatly outnumbers the foe, has incredible toughness, can fly, or some other method of breaking through relatively easily. You can always write your own scenarios with some limitation one how this is done, and I believe one of the current scenarios requires a full third of your models to break through and escape the board. There is no reason you can't design some even more detailed and complex 'move somewhere' mission: perhaps there are more involved, like they must travel through a realm gate, or can use realm gates to access some other part of the board. You can make your forces both attempting to run past one another, and you both get points for escaping out of each others' table edge, so you will need to manage how many forces you leave on defense vs how many you try to run through the other side. This category can make your games a little more involved that the 'blob in the middle syndrome' some people have been experiencing because they require mobility and maneuvering to meet your objectives.


Kill Something (Or Keep Something Alive)
A 'Kill something' mission can be pretty straightforward, especially if the condition is 'kill everything they have' - the rules themselves even suggest this as the default game. I would argue that this can still be an engaging experience and a worthwhile game if done correctly, but 'kill-them-all' doesn't have to be the only game you play. Imagine an army facing off against a force that also has a dragon. Even if the army 'loses' the battle but kills the dragon, they'll go down as legends in their tribe and will have achieved some moral victory, so you could say the game ends once the dragon is slain. A wizard could have been channeling some enchantment that dried up the rivers near a town and drained the wells, and the city won't survive the siege if this continues. They must kill the wizard at all costs, even if their kill team dies in the process. These styles of games can make things interesting because there now is a 'person of interest' that needs to be protected at all costs or slain at all costs, and how the two players try to protect or defeat the model in question can make for quite a variable set of games. The box set has a mission wherein the two forces fight and the goal is to kill the other side's general - with bonus points if your general does the slaying, which gives a high-risk/high-reward element to the scenario. These ones may be the simplest to design and understand, but by no means does that require them to be dull affairs!

Capture Something (Or Protect Something) 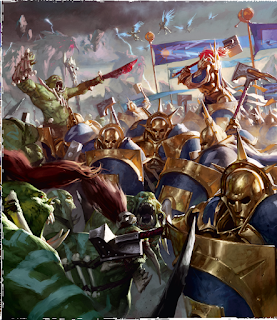 Imagine a critical gate of a castle that can only be opened by a winch inside. A Skaven horde pelts the fortress from outside to little effect, but a small group has managed to tunnel in and is attempting to access the gatehouse and open the portcullis which the surprised Aelfs scramble to keep them at bay. If the Skaven have models within 3 inches of the marker are there are no surviving aelfs within 6 inches of them, they can open the gate and win the game, breaking the siege open. If the aelves manage to keep the ratmen off the marker for some number of game turns, their reinforcements arrive and they last one more day. This is just an example narrative that could be used, but the concept is pretty universal. Force A needs to capture a terrain feature, plant a flag on the hill, grab a treasure chest, or whatever else you want to play. These can be played one sided like the skaven mission I just made up there, or more even where each side competes over one or multiple objectives scattered across the battlefield (much like standard 40K missions). Alternatively, each side has one artifact and the other side is attempting to control them both simultaneously to accomplish some goal, once again causing each player to think offensively and defensively. The possibilities are pretty broad, and you can adjust the rules to whatever you see fit. 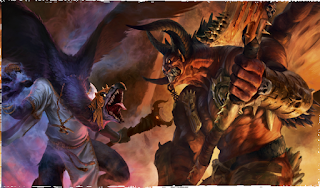 Another option is to have each player seeking a different goal. Instead of both players attempting to assassinate each others' generals, perhaps one want to kill the general while the other wants to capture the object. That way there is the potential for a tie, depending on how you determine 'victory points' or whatever mechanic you're using, but can definitely add variety to the games. Player one now wants to capture the object, but needs to keep their general alive in the process. Player two is now torn between priorities - do they focus on defending the object, or do they go hero hunting? How do they best divide their forces to accomplish those tasks? Blending the previous types into a fusion mission can add additional layers of complexity and competition into the games that might allow player decision making to be the deciding factor, rather than model or army strength.

As I often say at the end of these types of articles, how you want to play is up to you. Age of Sigmar offers up a good starting point framework for how to play, and the comp systems I listed at the start are another way to play, but if you want to take matters into your own hands, designing custom scenarios can be a really exciting way to tactically enjoy the game and flex your creativity simultaneously.

Have you played any missions or scenarios in Age of Sigmar, or designed any of your own? We're interested to hear how it went - let us know in the comments!