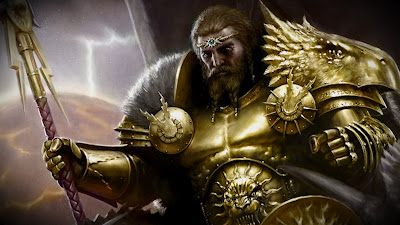 The Age of Sigmar has finally seen its official release and we have a lot of new information. The speculation can finally end and we can get down to brass tacks checking out the details of the new Warhammer Fantasy replacement. I've read through some of the leaked material in addition to the White Dwarf and have put together a quick guide to all that's happened since we left our intrepid heroes at the conclusion of The End Times. Beware, spoilers below!


When The End Times finished, we were left with the notion that everything had been destroyed in the old world, everyone died, Chaos wins, go home, and thanks for buying all of these books! However, there was a man who still existed and held onto the fragment of the old world's core, with the promise of a new beginning. That man was Sigmar, and the promise of the new beginning panned out in the events I'll detail below.

The good news we can glean from this is that nothing you own has been thrown out. You can still use all of your old armies and units, and we have lost nothing we had before, other than the setting (and rules!). Many were worried we would lose unique and interesting forces like The Lizardmen or Ogres, or have long-established armies like Brettonia or Beastmen tossed because of poor sales. This is no longer a concern! You can still field any of your old models and should be able to do so in perpetuity. The rules for the old models have been released, and can be found here.

Factions have been renamed in the fluff, however. We have seen the impact copyright law and third-party knockoffs have had on Games Workshop, and we have now seen a full transition from generic names that GW can't own being changed to something that they can. On paper, many of these look really dumb (Elfs are now Aelfs, Ogres are now Ogors, Orcs are now Orukks) but mostly these spelling differences don't change how you pronounce the names, which means you can keep referring to them vocally the same way. I imagine most of us will keep writing them the same as well.

If you want a glimpse at some of the new artwork and vibe of this release, feel free to check out the YouTube video GW has put out to promote it and get yourself hyped up for this new setting. Regardless of how the rules might turn out for competitive play, I'm pretty excited myself - some mockingly call this "Warhammer - Diablo Edition", but I was a big fan of Diablo myself and the similarities are not detrimental to the story in my opinion. Regardless, the silliness of some of the unit cards will make for an excellent beginner's game, and might make Age of Sigmar the best tabletop drinking game this side of Cards Against Humanity.

Of interesting note, Games Workshop looks like it's going all in on this new game. They have replaced the Space Marine statue outside of the headquarters with a Stromcast Eternal, and even the Imperial Aquila has been supplanted by some new Ghal Maraz crest. 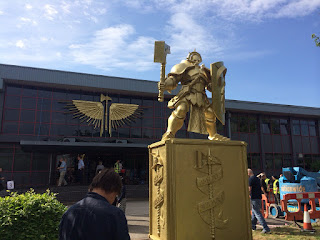 How does this all sound to you? Are you excited for the new setting in the Age of Sigmar, or are the changes driving you up a wall?