So I had been holding off on commenting on any rumors about Age of Sigmar, content to focus my hobby efforts elsewhere instead of wondering whether the bubble-verse was true or false, if my beloved Beastmen were indeed going to be squatted, or any of the other flurries of misinformation coming and going in the space between this release and the conclusion of The End Times. However, it looks like the cat is officially out of the bag and we have some really legitimate looking photos and information and I feel confident sharing it all with you and getting the conversation started. Some of my thoughts are below, and the mages I have acquired will be at the bottom of the article. Feel free to skip the jumble of words and dive right into the rules yourself if you're so inclined.

It is now looking pretty clear that The End Times were indeed that - the end of times for the Warhammer World. Everything that happened in those stories appears to be canon and will count as having occurred. I like to look at it as a farewell chapter for the world we have come to know and love, and a sendoff for all of the characters we have become accustomed to. Most characters got some mention or other, (SPOILERS!) and then died, and in the end the whole world exploded and most everybody got more than their daily dose of Chaos. Sigmar seems to have grabbed a hold of something that allowed him to create a new world, or at least bail out some of our friends and put them into this new realm.


Now that we're in Warhammer: The Age Of Sigmar, it is looking like Warhammer 9th edition isn't going to happen and this is indeed a total reboot of the game and setting. Many people will rejoice at this news, and others will despair, but whether you agree with the change or not it seems it's happening. It's perhaps a little strange that it is all getting rebooted right as we look forward to Total War: Warhammer, since that seems at least on the surface to take place in The Old World and there may be some discrepancies between the two worlds and story lines. That remains to be seen. The good news is that regardless of the setting change and new rules, ALL of your old models will still be useable. They will be getting rules releases in the near future that allow you to continue using them as you have been. In addition, in a huge change for GW HQ, The rules will be published for free and available to everyone immediately, indefinitely, without charge, no DRM, etc. There are only 4 pages of core rules, and the rest are included in unit entries known as warscrolls. I have posted those rules pictures below if you're hungry to find out just what they are and can't wait for the official release. 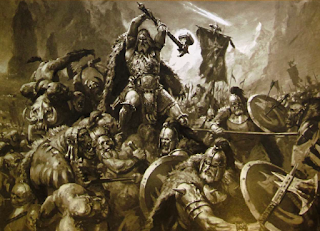 I would like to take a moment to discuss the ramifications of these new rules. Obviously some FAQ's are going to come out and some rules may be updated, but right now there appear to be a few holes that make the competitive aspect of the game less than ideal. As it stands, there are to rolls against your opponents weapons skill, and no strength vs toughness rolls, so an elf spearman is going to have the same chance of hitting and wounding The Glottkin as he is hitting and wounding a goblin. While this is a huge departure from the WHFB we are used to, it may not be so bad overall, since saves and wounds still exist, allowing for some variation in durability that can differentiate these units. Everyone has also gained a 'pseudo-daemonic instability', wherein they lose some models who flee after combat, known as 'battle shock' rather than the traditional morale/fall-back system. How much this affects various units has yet to be seen, but I feel like we'll find that certain unit sizes or types have it much worse under this new mechanic than others.

The largest, and most significant change that is likely to cause gaming imbalance in my mind is the lack of points values or anything to determine a 'fair contest'. Before, you and your opponent would count up points and have a rough estimate of he strength of each others' armies and knew that it would be an even footing, or something thereabouts. Now, there is no limit apparently, all things are 'unbound', for lack of a better term. A warscroll details a unit you can take, but doesn't limit the number of models allowed in that unit. As a result, even if we take the same number of warscrolls, you might have magnitudes more miniatures on the field. Maybe players can fiddle with comp to mean each army must have the equivalent number of wounds, but even this may not be perfect since one goblin is equivalent to one Chaos Warrior in that scheme. I shudder at the idea of two people lining up to play a friendly match, 'let's each have 7 warscrolls', they might say, and while one army looks pretty normal, the other has 7 Greater Daemons or 7 hordes of Putrid Blightkings. This is unlikely to be a fair match. 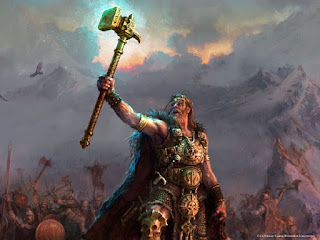 GW has a possible workaround for this - the fewer models army always goes first, and if you are outnumbered by a full third, you can choose an option from the sudden death victory chart, which gives you a way to win the battle if you accomplish the single objecting you have picked. This might represent a much smaller force failing to capture objectives or win the pitched battle, but if they assassinate the opponent's wizard then they have accomplished what they have come to do and win immediately. This I think can make for some fun casual games or nice narratives, but it definitely a target for abuse. At that point, the entire game hinges on whether that one sudden death condition is met or not. If it is something like the 'endure' condition, where at least one model survives to the end of turn 6, a player can select a few incredibly tough or elusive models, be outnumbered, and wager that they can just run, hide, or tank wounds effectively enough to stall to a victory.

Regardless, the community will likely find a way to work around these issues, manage a comp system to balance things out, or get some kind of FAQ/Edit/Clarification from Games Workshop to fix some of these holes. Ultimately, GW has long claimed to be a models company, putting out rules just as an avenue for casual 'beer & pretzels' gaming to find way to play with the toys they sell you, and it seems that, at least in Warhammer: Age Of Sigmar, we'll be getting just that: a casual ruleset for tossing dice with our friends that is great for anyone to play and doesn't require the huge rulebook full of fiddly crunch aspects to bog down the fun for a causal or new gamer.

How do you feel about these developments? Is this just what you were hoping for, or is it all an unmitigated disaster? Let us know in the comments.
By Unknown