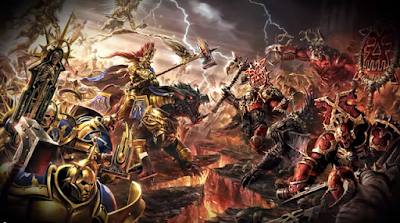 Now that the rules and Warscrolls for Age of Sigmar have been released, we're able to take a look at how things are likely to play out and what ways to best make use of the new system. The system rules, as well as the warscolls for everything from the old editions of the game are presented here free of charge so that you can follow along and come up with some ideas for yourself. Without any further hesitation, let's dive into how the age of Sigmar is going to play out on the tabletop.

Basics and Details
The initial thing to understand is how the stat lines have changed. While the game itself only has four pages of rules, the real meat is going to be in the individual unit entries known as Warscrolls. Any unit only has four actual stats, listed in the characteristics circle on the left hand of the scroll. These include movement (how far the thing can go), wounds (how much pain the thing can take), save (how well it is able to shrug off damage), and bravery (how likely it is to flee in the face of adversity). These stats all interact with the core rules of the game and fit well enough within that framework. What makes Age of Sigmar special and each unit unique is what can be found on the rest of each warscroll.


The first thing worth noting as a nice change to the old Warhammer Fantasy setting is that each weapon has its own statline, and these are listed directly in the model/unit warscroll. Perhaps a certain unit is more strong or skilled with its weapons, but it is easier to hit an opponent at distance with a spear or to hurt them with a greataxe. Before, we had to figure out how these things interacted with one another and it caused a great deal of page turning and rule-hunting in the big red book, but not we have all the combined profile stats right there. An ungor using a shortspear hits once up to 2 inches away on a 5+, wounds on a 4+, doesn't rend, and deals one wound of damage - and we have it all right in front of us. This is really streamlined and I feel makes for an easier and faster gaming experience. 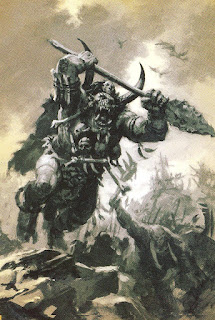 Additionally, some of the hand-wringing that went alongside the fact that there are so few core rules can be relieved by seeing that each unit has its own special rules and modifications right in its scroll as well. Let's peek at the Savage Orc unit warscroll from the Orcs & Goblins list. We'll see that depending on which weapons we outfit them with, they have different stats, the same as the ungor listed above, but we also have modifiers that are in addition to those stats. For example, their crude shields allow them to reroll save rules in the combat phase - this is different than the rules for the Stormcast Eternals' shields, which allow rerolling of any roll that results in a 1, regardless of if it is against shooting, magic, or combat. The advantage of this system is that we don't need to continually reference what crude shields do on some other page, we have it all right there. The savage orcs also have unique rules such as the warpaint giving them in essence a 6+ feel no pain, and the chance to add 2 to charge range if you include skull bashers, but on one condition that has people scratching their heads or sighing in disbelief. 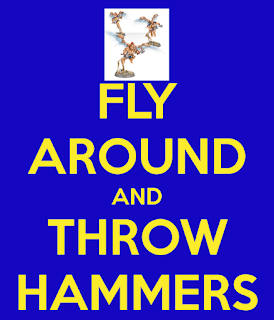 The aforementioned Skull Bashers' bonus, according to the Savage Orc warscroll, only takes place if you "Bellow Waaaagh while rolling the dice". This can be fun and playful, but for some players this breaks the atmosphere of the game and can get repetitive and annoying. There are rules that give benefits to a player if he raises a chalice and shouts 'for the lady', has a longer mustache than his (or her?) opponent, and other shenanigans. Settra does not kneel, so if you use him and kneel during your game at any point, you immediately lose. Things like this make for an incredibly causal and fun-loving atmosphere, but can throw a wrench in the enjoyment of some players. I imagine a workaround is to simply let the rule take effect without needing to do the dance or have a staring contest as stipulated in the warscroll. However, it's good to remember that this seems pretty clearly intended as a fun game and is not to be taken too seriously, so grab whatever crazy models and rules you like and have a party.

It behooves me to point out that some claim a GW rep has been going around and saying that these 'fun rules' such s tipping your fedora'd chalice to m'lady to get rerolls is just an homage to the old fluff and a light-hearted sendoff to the old models line. You will notice that the compendium warscrolls are not listed as 'Ogor Kingdoms' of "Orruks and Grots', meaning that these are NOT the new forces we will be seeing in Age of Sigmar, but rather short-term rules to use our old models in until we see the new things that will replace what we currently are using. A good thing to notice is that the rules for the box set don't include anything remotely like chanting things in a heroic voice or having a dance-off, indicating that if those types of rules aren't up your alley, you only have to wait a little longer for them to phase out.

Army Composition
Everything in the age of Sigmar is technically 'unbound', to borrow a term from 40K. You can take whatever you would like, and use any models in your army. You can have as large of units as you like, and take as many models as you want without regard for what your opponent is bringing. You of course have a disadvantage built in for taking 1/3 more models than your opponent, but if you outnumber then by enough then you are unlikely to lose via the sudden death rules. The advantage here is bringing a million models to the table, which boosts sales, so that makes sense. Alternatively, you can bring a small number of elite units, say, populate your entire field with giants, dragons, greater dameons, and the like, and model for model not outnumber your opponent while still greatly overpowering them. This will also drive sales of big expensive kits, which makes sense. I've written before about how GW exists to make a profit, but we need to be mindful of what makes a good, enjoyable (maybe even competitive) game vs what makes you win every round. the quickest fix is to try not to be a terrible opponent, but you could also attempt to roughly match wound count rather than model count. Obviously this isn't perfect, as 14 wounds of skeletons isn't equivalent to 14 wounds of Bloodthirster, but it's better than assuming the skeleton force is 14 times stronger, don't you think? 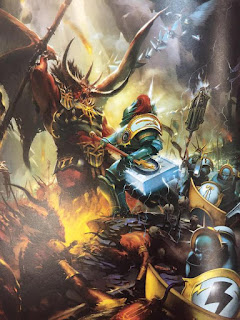 Each warscroll comes with "Keywords" that detail the grouping it belongs to. Dwarf Hammerers, for example, have the keywords Order, Duardin, Dispossessed, and Hammerers. Certain abilities your units have will only affect other units with certain keywords, so it may be wise to try and have as much overlap in your keywords as possible. Thorgrim Grudgebearer has two different abilities that empower models with "Dispossessed" keywords in their profiles, meaning even though Ogre maneaters may seem like a more appealing choice compared to Hammerers in an unbound environment, keyword cohesion can allow more force modifiers to come into play and give you some benefits to having a more aligned force. More ways to play and suit your playstyle is always a win in my book. Generally speaking this ruleset seems more suited to smaller games and lower model counts, but you can always wage war on an apocalyptic scale as we did back in 8th whenever it strikes your fancy.

How has Age of Sigmar been going for you so far? Has it been enjoyable or frustrating? Let us know how it has been working out.