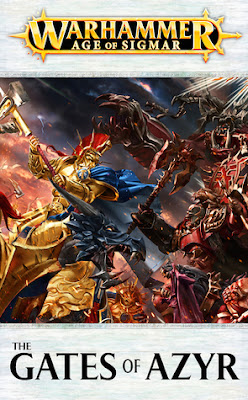 A review of the opening novel to the Age of Sigmar: The Gates of Azyr by Chris Wraight


The Gates of Azyr is the first novel set in the Mortal Realms in the evolution of Warhammer Fantasy, The Age if Sigmar.  It is clearly intended to go along with the starter box set that was releasedat the same time, and features the same characters, units, etc that can be found in those kits. The box set contains a few narrative scenarios for you to play out the models and learn the new rules before turning to the clasic pitched battle we are accustomed to seeing in the previous versions of Warhammer Fantasy, and the novel follows a similar vein.


We begin in the Realm of Heavens, seeing the Stromcast Eternals arrayed for war as they prepare to travel to Aqshy, the Realm of Fire and begin the campaign to retake the realm gates, open them, and conquer the Mortal Realms for Sigmar. As may have been expected, the scene is very reminiscent of Space Marines, going into detail about their finely crafted weapons and armor, their reforging at the hands of their god-king, and their mission to strike back at chaos and liberate the world for mankind. We meet Vandus Hammerhand, the leader of the group and the main character of the boxset, but interestingly we do not dwell on him or the rest of the Stromcast Eternals for long at all, and instead get a peek inside the Realm of Fire to see the situation before battle is joined.

In the mortal realms, despite the long reign of chaos and the destruction they have caused, some humans yet remain untainted, though fleeing for their lives. A group of humans is being hunted through the ash wastes by a group of Bloodreavers, cannibalistic lowly warriors of Khorne. As the group scrambles through various harrowing situations, pursued relentlessly by the Bloodreavers, we learn a small amount about the history of the area as they humans know it and the existence they have had to eke out here in order to survive. We don't actually witness any of the brutality that the Khorne disciples are dishing out as they catch the less fortunate of the group, but the lack of description leaves more to the imagination and is a nice artistic touch, allowing the reader to do the scene mroe justice that words may have been able to.

Shortly thereafter we switch to the viewpoint of one of the Bloodreavers and witness the other side of the coin - life as an chaos cultist analogue is not so great either, though it certainly appears preferable to the lives of the humans they are chasing. Our Bloodreaver was a normal human once, before he was defeated and given the choice to join in the cannibalism or become a meal himself. He recounts in his mind the difficulty of the transition period, and it actually helps to humanize him in a way, despite the fact that his corruption runs deep now and he is unrepentant. Some Games Workshop stories seem to portray Chaos-aligned characters as mustache-twirling villains with nothing but mindless evil in their hearts, but Wraight has done a good job showing that the fight between the forces of Order and Chaos is not as cartoonish as we have been led to believe in some other publications. 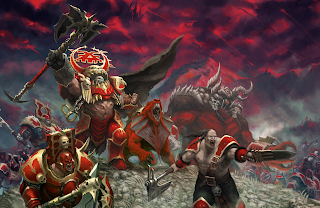 Shortly thereafter we meet the main characters of the Chaos half of the starter set, Threx Skullbrand and Korghos Khul. We don't get to hear much about Skullbrand other than rumors of his past, which even within the story itself do not appear to be known for sure, which allows him to be seen as some shadowy character but left me a little disappointed and wanting to know more. Khul, on the other hand, seems to have a relatively well established personality and I would argue that despite being a Lord of Khorne and a ridiculously powerful warrior, is actually the most sympathetic character in the story. Having fought in Khorne's name and mounted skulls for his favor for years, Khul is bitter at never having ascended or received the blessings he most desires, and struggles to find a way to please his patron and earn immortality. Haunted by the memory of the one warrior who escaped him in a flash of lightning, Khul is searching for the skull of one last worthy warrior to place atop him pyramid of skulls and believes that this will finally earn him his place alongside the gods. 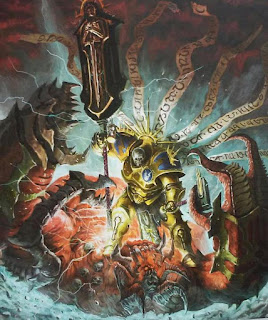 Predictably, the warrior who escaped many years past is none other than Vandus Hammerhand, and once he appears on the battlefield to reopen the realm gates the two forces clash and the fighting goes on for a very large portion of the book, largely following the pattern of the battles from the box set, so you can 'play along as you read', I presume. We get glimpses into the character of Ionus Cryptborn, the "Lord Relictor" of the Stormhost, who once again is a much more compelling character than Hammerhand. When he faces  off against Khul, he is nearly defeated and his skill impresses Korghos, who offers him a place in his Goretide. The following quote is close to the only insight we get into his past, or the concept of the Relictors in general:

"Ionus smiled beneath his deathmask. If things had been different, he might have been pleased to recount the tale. He would have told of the debt he owed the God-King, and the ancient curse that his choice had made him subject to. He would have told of Nagash, the deity who slumbered still but would be sure to come for him when the toll of years was complete. He might have said that, yes, he was different, and that he was the Lord-Relictor of the Stormhost, privy to secrets that not even the Hammerhand had been made a party to, and that every road ahead of him was dark and filled with pain whatever the outcome of this battle."

Eventually, Hammerhand and Khul meet, as was inevitable in a book based around this box set, and perhaps despite the narrative intention, I actually wanted Khul to win. Hammerhand is a relatively bland albeit heroic figure, and is pretty much uninspiring to me. He let his memories of his past battle against Khul as a mortal get the better of him, which did add some humanizing element to his character, but mostly served as the valiant any-hero that didn't have many defining characteristics beyond being really good at everything and the best of the best etc. 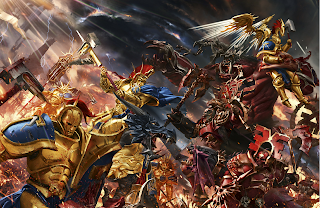 Because this is the age of Sigmar, after all, Hammerhand ends up winning, the portal is opened, and tons of Stormcast Eternals pour forth into the realm of fire in an attempt to retake it. We see that there are other realmgates that allow chaos to continue pouring into the land, so the fight is certainly far from over. We also learn of other similar missions with other stormhosts (Space Marine chapters, in effect) headed to other realms, so the war is on across all the possible battlefields. As the battle concludes (having taken up nearly two thirds of the story's length) the Eternals meet the surviving humans, and have an interesting conversation that is pretty much the only moment where any humanization or interest in Hammerhand's character is generated, and we are left with the statement that the war is only just beginning.

Overall it serves as a decent introduction to the new Age of Sigmar universe, and certainly holds up as a companion novella to the starter box set. The writing style was interesting with the perspective shifts, including the viewpoints of the chaos forces, and when battle was not being described it read pretty well. The battle scenes were relatively pedantic and over-the-top as we have become somewhat used to in Black Library Novels, though I am sure that the various units and their abilities had to be included as an extra selling-point feature for the box set so blame should not lay too heavily on Wraight's shoulders. Overall I found it an engaging enough read once you were able to look past the battle descriptions and a good introduction to the new scene, and rate it 3.5/5 stars. 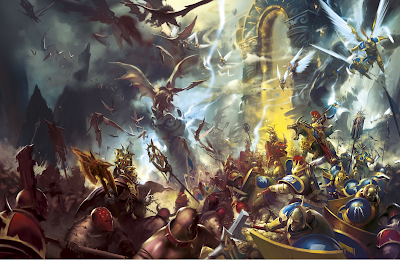