Editorial: Why Are Suddenly Free Transports The End of 40k? 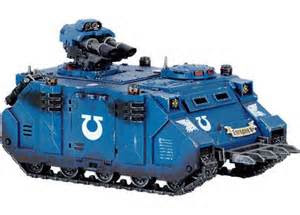 With the release of Codex: Space Marines, GW added a new formation called the Battle Company. It consists of 2 Demi-Companies, which have the added benefit of Objective Secured. The Battle Company affords the ability for Space Marines to get a free Rhino, Razorback or Drop with any unit that is allowed to take one. Without a doubt, this is a fantastic ability and has the potential to add nearly 300 points or more to an army list for Space Marines.

Immediately, as I have a sizable Daemon force, I think of the Demonology (Malefic) tree. The options are plentiful for adding extra troops as the game goes on through the use of this psychic tree. In addition, the option to add more Pink Horrors means a boatload of psychic dice to add to the pool. Even other armies can access Malefic Demonology. Whether it is worth risking Psykers to Perils of the Warp and One Eye Open checks is another story. Regardless, it can be a very point effective way to add points to an army. Suddenly a 90 point squad of Horrors (which was summoned) turns into a 250 point Bloodthirster flying around the battlefield in a Blood Angel primary army (and yes, this has happened to me in a tournament prep game).

Continuing along the thoughts of Daemons and Malefic tree, there is the Khorne Daemonkin book. There are some interesting combinations in that army which allow for further summoning tricks, which are potentially not bound by normal restrictions for summoning. The Axe of Korlath allows a Bloodthirster to be summoned at the death of the Lord that carries it. There are Blood Tithe abilities that allow for the summoning of both Daemon Princes and Bloodthirsters, along with other lesser daemons. Again, this increased potential for free models, for some reason, is overshadowed by the Marine release.

Free models are again a major component of the Tyranid codex and formations as well. In the base book alone,  there is the Tervigon. While the spawning potential is definitely up to chance, the potential for more Termagants cannot be ignored, especially if multiple Tervigons are fielded. Furthermore, the Endless Swarm formations that allow for Termangant and Hormagaunt models to be replaced onto the board are, in essence, free points.

These are some of the major examples of "Free Models" as mechanics within the game before the Battle Company was ever published. Now, what does really stick out for the Battle Company is the nature of "earning" the free models. In the stated examples above, there is at least some element of chance that affects the number and quality of models placed onto the board. The Battle Company does not have this random element; it has a set of specific models and units that must be taken in order for the army list to qualify. Instead of leaving it up to chance, the models are taken as planned in the list building phase. You KNOW what models you get for free, and it is much easier to make them part of a consistent battle plan. The cheese at the end of the maze is guaranteed, as long as you follow the arrows. 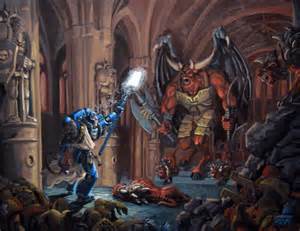 Daemons have won major events consistently, but out of the examples shown above, no major events have been won through these extra points. Maybe free Rhinos and Razorbacks are going to be that edge that a standard Marine list needs to succeed. Maybe it is relegated under "good, but not GT winning." Only time well tell.

Have I missed any other "free unit" tactics? Let me know in the comments below! You can check out more of my thoughts at my blog at www.rarkthorshold.blogspot.com (Check out the new banner my friend Jen made! It looks great.)
By Unknown