Editorial: If Ad Mech Gets THIS Much Love, What About Sisters of Battle? 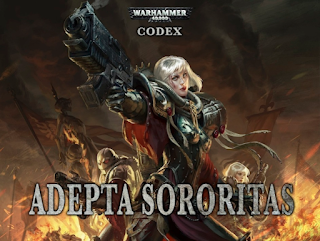 Rarkthor is back to talk about why the Sisters of Battle need work ASAP.

Some of you may see this title and say, "Well, that's obvious." and some of you may say, "Well, is it really that important? Clearly sales don't justify the need for the models." Let me tell you why the inclusion of plastic Sisters of Battle models would be good for the game.

In an already crazy diverse world of 40k rules and codicies, getting a ridiculous amount of treatment for a "niche" part of the universe doesn't seem so ridiculous anymore. In particular, let's take a look at the Adeptus Mechanicus. They have received an entire line of plastic minis and TWO rulebooks. Even more than these two rulebooks, they have the Knight models interacting with the book through formations. Even Khorne has a book all to himself! The argument of the Adepta Sororitas is too "niche" is now not valid in light of the recent releases.

Continuing another tired argument of why Sisters are not important, some would say that it is a weak attempt to attract women to the game. In all games, people are attracted to different styles or ideas. I have met a few female 40k players, and they have played Tyranids, Dark Eldar, Eldar, and Chaos. That being said, I know of a few female 40k players who would LOVE to see the nuns with guns get some love. For them, they love the aesthetic of the hard-line women unafraid to fight for a cause. They love the power armor and the bolter weaponry, much for the same reasons people like Space Marines. Even still, there have been several male players who enjoy the aesthetic of the Sisters of Battle. Why on earth have they be so forsaken?


There have been 3 iterations of the Sisters rules that I have seen during my time in the game: the Witchhunters codex, the Sisters of Battle White Dwarf, and the recent Ebook. Each of these rules publications have been pretty good! I have seen folks do extremely well with the first two iterations, and I have sadly not seen the last in action. The Acts of Faith rules are very interesting in terms of their application in the game and in terms of flavor. The special rules really evoke the purpose of each model, and they help to create a very unique style of play. Again, I struggle to see why these models have been left out.

The final argument lies in the "Well, at least they are available in metal" line of thinking. That is true, and for some, they make an argument concerning prices and being involved in the hobby. If you don't want to pay the price, then don't play the army. The issue comes less from the price and more about the lack of availability. Metal models are frustrating in terms of their options in building the models themselves and the application in army lists. They are an antiquated material for use in the game. For those who really value the idea of WYSIWYG, purchasing individual weapons can be a very tiresome purchase and hobby problem. Some point out the value of mold creation, but this is legally questionable. Plastic models would solve all of these problems.

As I search for solutions to this conundrum, come check out my blog at www.rarkthorshold.blogspot.com. What do you think a good solution would be? Should i just bite the bullet?
By Unknown