Editorial: Ease up on the power creep - it's ok to do it a different way.

Over the past two years or so the Game of Warhammer 40K has changed a lot, the meta has been through big shifts, and the way we look at building and collecting our armies is not what it used to be. Each new change has brought a mix of cheers and gripes, as is the norm, and sadly the community as a whole seems to have fallen on the side of insta-judging every change as a bad one. 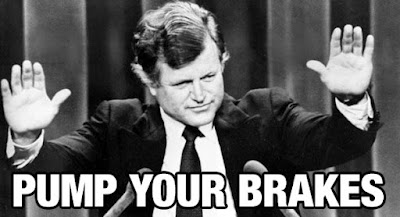 What's the overall picture though? I came back to the game after a break since 5th, and it is such a different beast now from then. At that point there was still a semblance that this was a game with rues and tactics and competitiveness. Now, I'm starting to think that that was never true, that the age of 40k as a game primarily was short. That maybe, just maybe, 40k has all along been what it is now; a collectors paradise, with a rule system attached almost by accident, that gives us all a framework within which to build our collections.

Looking back at some old interviews (I mean late 80's early 90's) it doesn't seem as if it was ever the intention to create a game for gamings sake; that in actuality the start of this universe was always stories and the best figures that could be made available.

It explains why GW have always been keen to emphasise the social and hobby aspects, why the handful of tournaments in White Dwarf never really took much focus in the magazine. It dovetails with the people who used to spend alot of time on NPC back stories for role-playing that were so detailled as to be absurd (why do we need to know the life story of a bar-maid?). It's all about the stories, and creating a world within which our plastic men have context.

Fast forward to now and that's basically what we have, a company that is churning out tons of great models, and pushing ill-fitting rules together to allow you to contextualise them, and then collect them. Cynical responses aside (oh please, just don't, we all know the "evul empir" line) there isn't a big difference between how it was and how it is. Alot of energy is expended trying to find ways to make the tournaments appealing and balanced, coupled with the huge discussions of rules and tactics and whining about imbalance this all makes up a considerable part of the scene we all inhabit, and to me it just feels ridiculous. Personally, It has made me make time to look at other companies models, little projects in between armies, which I enjoy, but I wanted a way of maintaining a no-pressure connection to 40k.

To that end, I gave some thought to how we could stay current and avoid almost all the contentious units and rules that are abound at the moment. In the end, the answer was quite simple,

If you only ever take the old style FOC chart as your base, there are basically no power-creep issues.


No Lords of War.
No Gargantuans or Super-Heavy anything.
No allegedly broken formations.

On top of this its much more difficult to spam inappropriately, or cheese a death star together. One, old style, FoC.

And the best part is with all the changes and rejiggering that's occurring regularly, that style of force org isn't really needed. Allies are everywhere, formations abound, you can do what you like, but that force org chart is still there in case you need to pump the brakes, and just have a good old game of shooty-stabby. GW have left it sat there in the rules, and it even carries a bonus in giving ObSec to units.

Seriously, there you have it. Take a list drawn together from nothing but the normal requirements for a 1 HQ, 2 Troops style Force Org and you continue to have depth and variation without anyone being tempted to take 7 fleet, battle focussing Wraith units, or a Baneblade list. Do this if you're a fan of the game as was, and breathe easy that it's still there, and when you're ready you can duck back over the edge to where madness abounds.

Madness, and some lovely models that is.
By Unknown