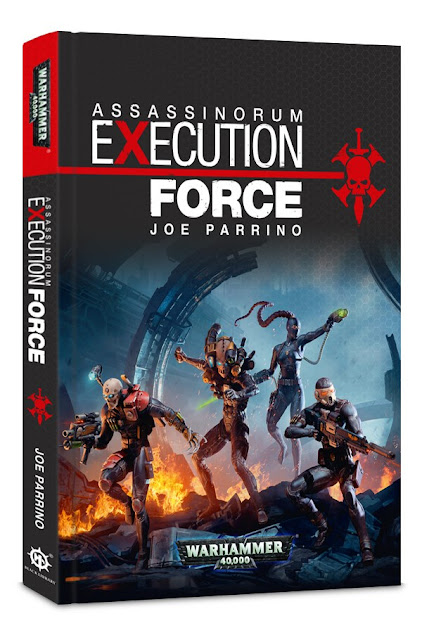 
"A novella that unfortunately fails to do justice to the Assassins through compacted story telling, flat characters, rather underwhelming action scenes and a rushed ending. The potential was there, but sadly the book does not live up to the standards the Assassins deserve." - Lord of the Night @ Talk Wargaming

Assassins have always been one of the most awesome and underused aspects of 40k. So with the release of the new board game I had some hope that they would start getting some more attention of a literary nature; I got my wish but unfortunately not how I wanted it. Assassinorum: Execution Force by Joe Parrino has a great concept, a team of Assassins on a mission to save the galaxy from a mad Chaos Sorcerer bent on ushering in the final defeat of the Imperium, but none of the individual elements of the novella really work together and it results in a novella that fails to deliver a compelling story with interesting characters and powerful battles.

The Imperium is in grave danger! The insane Sorcerer Severin Drask of the Crimson Slaughter plans to open up a warp rift that will allow the Despoiler and his dread Black Legion to march behind the lines of the Cadian Gate and strike directly at the heart of the Imperium. The Space Marines cannot respond in time and the Guard are overmatched, only one group can stop this nightmare before it is too late and save the Imperium of Man. The Officio Assassinorum, but an Execution Force made up of a member from each of the secretive and distrustful Assassin Temples is not a tool to be wielded lightly or without friction. Unless the Assassins, each of radically different creeds, can resolve their differences, the End Days may be about to begin at last.

The story in Assassinorum sounds interesting in concept and really it has quite a lot of ideas that should have been exciting; a Sorcerer bent on annihilating the Imperium, a race against time on a Chaos tainted world, a team of highly enhanced killers with wildly different methods that don't like or trust each other forced to work together, the looming threat of Abaddon the Despoiler and the potential for a game-changing event in the 13th Black Crusade. And yet the story feels rushed and underwhelming, quite a bit of the novella is spent with the Assassins in transit to the planet while the only scenes there are vignettes that show Severin Drask killing a lot of people with sorcery. Even when the Assassins do arrive it feels as if they just simply go down and wing it rather than making any real plan, while all of Drask's ritual preparation and the like is completely off-screen. Even the threat itself doesn't feel impressive since the Assassins seem so casual about it, like stopping a Sorcerer from ushering in the apocalypse in five minutes is just another job to them. The story felt compressed to fit the novella format, which didn't do it any favours as it feels rushed and much shorter than it should have been, I think that if this had been a full novel it could have been much better with time to devote to showing the seriousness of the threat Drask poses, the friction between the Assassins and some actual character development, and scenes beyond the Assassins travelling, bickering or fighting.

The characters look interesting at first glance but they lack any real depth. We have a Vindicare who worships the Emperor and is anal about details, an Eversor that is just barely holding it together with special drugs (where have we seen that before...), a Callidus that has no real characterization beyond her hate for the Vindicare, a Vanus that barely appears and a Culexus that has no personality to speak of at all. Drask had some promise as a young Chaos Space Marine with no connections to the original Traitor Legions trying to make a name for himself and earn favour, but he just ends up being a vehicle to show off Parrino's descriptions of sorcery dealing death as Drask butchers his way through a Guard regiment, while the only other CSM character of note didn't really appear much before his untimely death. None of the characters undergo any real development through the novella, by the end their attitudes (the survivors at least) are the same and none reached any kind of revelations about themselves or had any kind of experience that made them rethink their attitudes and opinions, or anything of that nature. This lets the novella down the most of all; a lacklustre or rehashed story, and this novella has both, can be made a little better by the presence of strong characters that work their way into your heads and sometimes hearts, but you'll find no such characters here.

The action scenes are the one area where the novella redeems itself a bit, but not much. Truthfully the novella is ultimately "bolter-porn", a term that I don't like but admit is fitting here. Most of the action scenes in the novella don't really have anything new; Chaos Space Marines tearing through Guardsmen like a scythe through wheat, a Sorcerer who turns people into bulks of heaving flesh or frozen crystal statues and the like, and Cultists who fight in swarms and die in them as well. The Assassins read a little better in these scenes with each one's unique style of combat adding a bit of flavour to the scenes, but their power levels feel underwhelming when one Chaos Marine is enough to pose a real threat to an Assassin, whereas in the Horus Heresy novel Nemesis a single Assassin could wipe out squads of Astartes with planning and skill. The final battle with Drask feels very underwhelming as well, as though it were just another confrontation in a longer piece and not at all worthy of a fight to save the Imperium from Chaos. A combination of nothing new or special and too many of them in a limited number of pages makes the fight scenes too numerous and overwhelms the few positive elements of the novella until it begins to drag and you want to get it over with.

The pacing of the novella is uneven, something not helped by the repeated switching between the Assassins and Severin Drask for short and often meaningless scenes that either show the Asssassins bickering more or Drask killing yet more puny Guardsmen with his magic. The switch from sedate conversation and travelling to quick bursts of action and killing makes the novella feel strange to read and doesn't allow the reader to get comfortable and settle into the story. The setting is one of the positives of the novella however, as Parrino creates a rather unsettling and disturbing environment in Achyllus Prime for the Assassins to make their way through, and if more of the novella had been spent there it would have considerably improved the quality of the story in my opinion. But alas Achyllus Prime is underused and we don't really get to see a great deal of what the planet has become in the short time that Drask has been in command of it.

My favourite quote, I think is this one as it summed up this particular character quite well and was a glimpse of the well-rounded character that he could have been;

The ending was in truth, also disappointing. I suppose it is meant to feel sad and grim, but since none of the characters were given enough depth to make me like them, the ending just came off as somewhat pointless and cutting off any potential character growth in future stories. After all the build-up the Assassins were rather unimpressive in the final scenes, hardly worthy of being called "The Emperor's Judgement" and it felt as if the objective was achieved only through sheer luck and the typical trope of the enemy commander being overconfident enough to believe he can't be defeated. The actual epilogue was confusing, one particular character claims to have done something that I could find no trace of in the actual narrative, maybe I missed it but it seems to me as if a rather pivotal scene that would have been very interesting to read was relegated to occurring off-screen and being related to the reader in a bit character's thought narrative in under two sentences.
The rushed nature of the story continues in the ending which comes too quickly, it almost felt as if Drask were a level boss in a video-game that the Assassins had finally reached after making their way through the level, and the boss is completed by a player who has done it so many times that he doesn't even have to try anymore. An analogy, but it's how it felt to me.

For an uninteresting and rushed story, characters that felt wooden and dull, action scenes that felt either rehashed or poor representations of the Assassins, I give Assassinorum: Execution Force by Joe Parrino a score of 2.7/10. This is a novella that I would not recommend to anyone who wants to read good 40k adventures, because this isn't one plain and simple. It's a shame really as the Assassins are a truly interesting part of the Imperium and all kinds of great stories could be told about them, but really this novella feels as if it was churned out in a short amount of time simply to sell alongside the board game as an extra bit, and that is a bad reason for a novel/novella/etc to be written. This is the second time that I have been greatly disappointed by the works of Joe Parrino, I think perhaps I just dislike his writing style, or I just find him to be a lesser writer. Either way it will take a very interesting premise for me to buy a product with his name on the cover in the future, and even then it won't be on the release day.

That's it for this review, thanks for reading. Until next time,