Army Selection: Is The Astra Militarum Right For You? 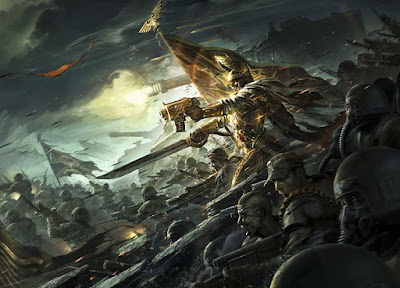 In continuing with the theme and spirit of our Army Selection Series, we now take a look at "The Hammer of The Imperium" - The Astra Militarum. Colloquially known as the Imperial Guard (and still referred to as such by crotchety old-timers like myself), The Astra Militarum, or AM for short, are the rank and file human army. While they don't feature as heavily in the promoted material or the fluff, they number in the untold trillions throughout the galaxy and are responsible for the vast majority of military actions taken by the Imperium of Man. While there are supposedly fewer than one space marine per planet humanity possesses, each of those planets tithes thousands or even millions of men and women to the service of the AM, and it is by their blood, sweat, and tears that the race survives. Wielding nothing more than their faith, determination, and more tanks than you know what to do with, they take to the trenches to face off against the myriad horrors of the 41st millenium.  If the idea of the heroic everyman protecting their homeworld or the roar of big guns intrigues you, then read on and find out if the Astra Militaturm is the force for you. 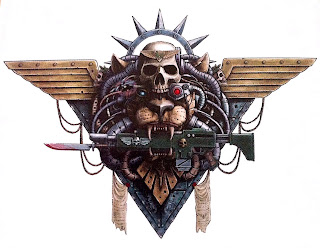 In the grim darkness of the far future, just about everything in the game exists for the purpose of threatening The Imperium in some way. Despite all of the love GW showers on the various Space Marine chapters, the Astartes exist primarily as elite strike forces, getting in, getting the job done, and getting out. All of the heavy lifting beforehand, during, and afterward is taken on largely by the broad backs of the Imperial Guard. Waging war is a more 'traditional' style akin to WWII forces, the AM field soldiers in droves with tanks and aircraft aplenty. Across countless stars and innumerable worlds, humanity finds itself threatened, and it is those same common people who rise up to defend their sectors or be shipped across the galaxy to defend others. It may not be a glorified and touted as some of the other imperial factions, but without the common imperial soldier, the entirety of mankind's empire would collapse. 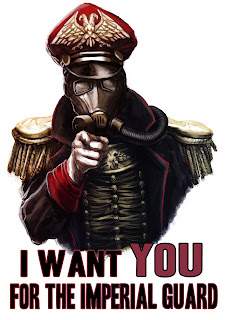 Perhaps the most intriguing part of the AM is the fact that they recruit from so many worlds, each unique in its own right and as such the individuals hailing from those worlds vary wildly. GW and Forge World sell models from several different sub-factions to match the breadth of human societies in the galaxy, be they the Tallarn sand raiders, the Vostroyan nobles, Valhallan ice warriors, Catachan jungle fighters, The Death Korps of Krieg, or the humble Cadian soldier. The immensity of the galaxy and the relatively haphazard record keeping of the imperium means you certainly can create your own unique world, society, and people to draw upon for your own regiment which really allows for you to customize and personalize your force.

The Astra Militarum also draws upon other sources, notably the Commissars who act in a commanding role. Trained nearly from birth for their role, they act as frontline commanders and morale boosters - though their way of boosting morale tends towards 'inspiration through fear'. In order to keep their men in line and fighting fit, they often must threaten to execute those found wanting, and in-game actually do execute soldiers who break morale and flee. Despite the barbarity of the technique it appears to work well enough and while the commissars are not generally liked or respected by their men, they get the job done and as such are a staple of any Imperial Guard regiment. 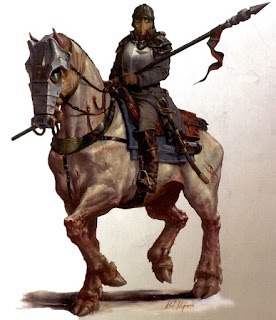 Additionally they draw upon other elite units such as the Tempestus Scions or Elysian Drop troops, the former of which recently got its own models line and supplement for gameplay. Stormtrooper-like in appearance, these better trained and better equipped soldiers are more effective than the common soldier, though they die almost as readily. As artillery shells scream overhead and and crack of lasgun fire floods the field, the attitude seems to be 'Die for The Emperor or Die Trying', and the Astra Militarum rarely disappoints in that regard. If none of this is cool enough for you, keep in mind that they can ride cavalry too, and what's more fun than charging horsemen into a pack of demons?

Seeing how many different regiments are available, there isn't really a unified aesthetic to the Imperial Guard aside from the presence of lightly armored and lightly armed infantry surrounded by heavy tanks. The general standard would be to focus on the Cadians, since they feature most prominently in art, fluff, and models lines coming out of Games Workshop. If you think of a combination of World War II militaries interspersed with elements from Starship Troopers (the film, not the book), then you will have a pretty close idea.


The vehicles themselves look decidedly 'pre-modern', in part because of the intentional World Wars/Vietnam War appearance, and in part because in the galaxy of the 41st millennium technology is pretty reverted in some areas. Sure, we have the capacity to travel the stars, shoot lasers, and colonize dangerous worlds, but we've forgotten how to give vehicles anti-gravity fields or aerodynamic designs. The models themselves generally have a fair amount of exposed skin, particularly in the face, so if that sounds like a daunting task then perhaps you might want to stay away from AM or select models from one of the different types of Imperial Guardsmen. However, for those who have skill in painting, the fact that these models are human and have faces you can see presents an opportunity to paint some really evocative miniatures. 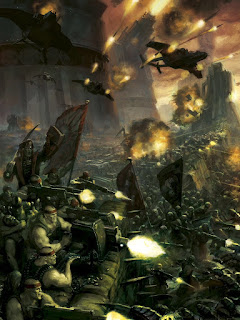 There are three things that you should keep in mind when playing the Astra Militarum: You have bodies to spare, you have some of the meatiest and most numerous vehicles in the game, and you have 'Orders' to issue your troops. Orders are perhaps the most flavorful part of an Imperial Guard force, as they represent both your warlords belting out commands to guide his troops, and a great way to apply force modifiers to the effectiveness of your models. Do you have an enemy who is hiding in cover? There is an order that makes that cover worthless. Do you need to get to that objective right now? Have your squads run like the Emperor himself is watching. Is there a vehicle or monstrous creature that is causing you problems? Tell your men to bring it down and they will. Depending on what specific thing you need done in a given round of the game, you can issue orders to help make sure that it happens. Orders give you great tactical flexibility and make your fragile humans worth taking on the battlefield. 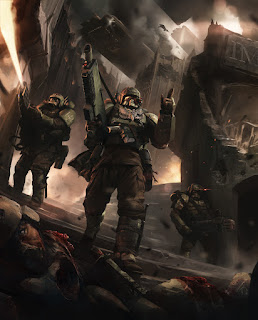 In regards to the actual unit selection available, you can generally design your force in a few different ways to fit your playstyle. The Astra Militarum is capable of playing a horde style force with dozens of guardsmen on the field if you like outnumbering your opponent, giving them too many bodies to reasonable deal with. You can become the tank commander your childhood self only dreamed of and run columns of vehicles across your enemies' lines like every true treadhead desires. Or, you could channel your inner Top Gun and bring in the air cavalry, bringing more flyers to the table than any other army could hope to muster, and more than most could hope to take down. Neither are you restricted to selecting a single form of these general playstyles, you can mix and match the pieces you like and create a force that is truly your own. What they lack in physical strength or weapon skill, the men and women of The Guard more than make up for it in sheer will and numbers. As long as assault and close combat aren't something that you aspire to focus on, the AM likely have something for you. 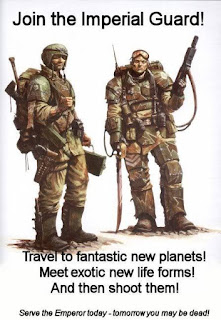 Overall, AM are relatively accessible for a player to get into. The fact that the models are humans using semi-historical/semi-futuristic gear means that alternative miniatures companies have things that can be used as proxies or conversion opportunities and essentially no copyright battle is going to make that go away. Additionally, since your regiment can hail from any world you can think of with whatever cultural norms you like, there is a very wide spread of things you can do to make the force your own, meaning your models can be sourced from really anywhere you see fit if you don't want to shell out top dollar for the Games Workshop versions. The AM have recently gotten a codex update for late 6th/and 7th edition, so their models and rules should be pretty easy to come across. Getting started isn't too hard, all you will need is a Lord commissar and two squads of veterans and you'll be ready to go, or you can pick up their battleforce starter kit and essentially be ready to play a small game, somewhere around 500 points. Certainly you can spend big money on some really fancy tanks or a hundred soldiers, but as an small starter force or allied detachment the AM are suitably accessible. 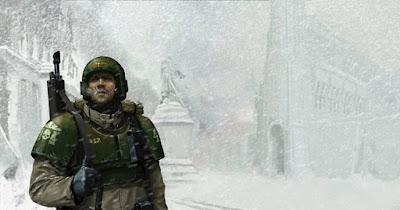 How does that sound, soldier? Ready to defend the Imperium and fight for the continued existence of mankind? Grab a lasgun and let's get to work!
By Unknown