Army Selection: Are Khorne Daemonkin Right For You? 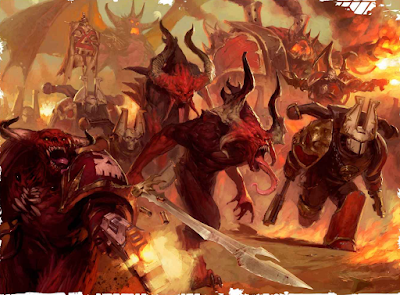 Do you love the color red, the number 8, brass, dogs, axes, skulls, daemons, or raging warriors in close combat? Good, you've found a great hobby for yourself. Of course, a fan of many of these things can still find themselves wondering about the best avenue of expression for their favorite things, whether Chaos Space Marines, Demons, The Crimson Slaughter supplement, or something else will slake their bloodthirst. In this installment of the Army selection series, we'll be taking a look at why you might want to consider Khorne Daemonkin as your codex of choice. 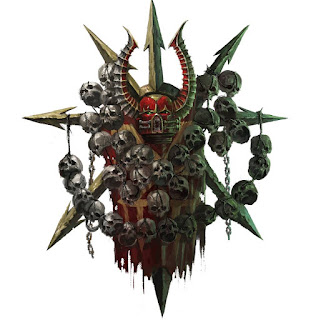 Fluff and Personality
The meanest pack of hellspawn this side of The Eye of Chaos don't need too much of an introduction - this force is a hodgepodge mashup of just about anything that can be dedicated to Khorne. One of the four great Gods of Chaos, and the premier of The Ruinous Powers, Khorne sits atop his throne of skulls and watches unending battles for his amusement. All he desires is war, endless and eternal, and blood to be spilled from every creature on every battlefield.  To that end, he's created many demons and corrupted many Space Marines, tempting or turning them to Chaos with promises of gifts and power. without diving too far into the backstory, Khorne has existed and will continue to exist so long as there is war and violence in the hearts of the living creatures of the galaxy. during the events of the Horus Heresy, Khorne selected his share of the traitorous legions and has picked up a few more chapters along the way to fill out his stable of Chaos Space Marines to supplement the daemons he spawns to fight in his name. Now collected under one banner, the Khorne Daemonkin stride forth into realspace to wage war on the denizens of our galaxy to shed all of the blood they can, be it theirs or their opponents - for Khorne cares not from whence the blood flows, only that it does. 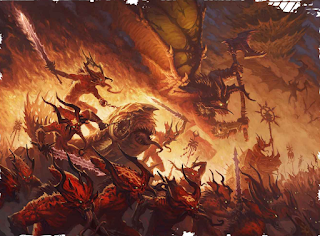 BLOOD FOR THE BLOOD GOD, SKULLS FOR THE SKULL THRONE
Red is everywhere in this force, and while some find it a hassle to paint I feel that it is one of the colors with the most depth available to a skilled painter and can really add character to your force if you make good use of washes and shading. You could theoretically use any colors you like, of course but most khornate models have traditionally been painted red and brass/gold. The army is heavy on close combat oriented units, so you'll be seeing a lot of swords, axes, and the like as well. Khorne is also affiliated with dogs, and some say he even has a dog-like face himself, so you will find varying degrees of humanoid and canine heads and helmets on your models, alongside some actual hound and hound-inspired models. A Khorne Daemonkin force is largely composed on infantry - there aren't any vehicles aside from transports to be found (and what truly honorable combatant hides in metal boxes anyway?). You will be able to replace tanks with Daemon Engines however, which can do some of the same things but look like monstrous constructs of living metal and flesh straight out of a netherworld factory. If the appearance of a red tide of boots and chainaxes gets you going, and your playstyle looks something like "All Assault, All The Time", Khorne Daemonkin may be just what you're looking for. 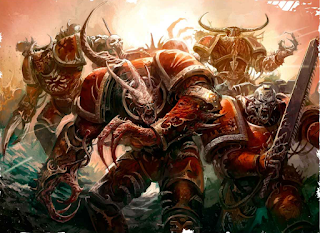 Obviously there are certain nuances to any army, but the gist of this one is generally straightworward, in that you do just that - move straight forward. Your job with Khorne Daemonkin is to get as many of your models into combat as quickly as you can without wasting time for shooting or what have you. And psychicpowers? absoultely not. Khorne doesn't have the patience for mamby-pamby wizardry in his force. 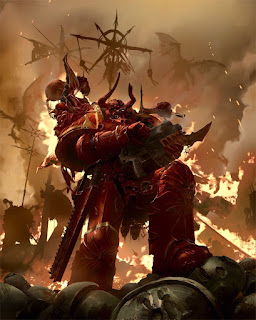 One of my absolute favorite parts of this army, and also one of the most powerful, is the blood tithe table - blood for the blood god. What this means is that as your army kills more and more units, you earn tokens or points that you can spend on rewards to bless your army. The more killing you do, the more tokens you get to spend on a turn of boosting your army's potential. The nicest and fluffiest part of this is that you also get tokens if your own units die, because as they say, "Khorne cares not" from where the blood flows. You have the ability to add adamantium will or feel no pain to your units, furious charge on everything for a turn, or even summon a Bloodthirster - for free! if you use your blood points well and plan when to use what bonuses, the Khorne daemonkin can become incredibly powerful. Even better, the bonuses conferred from spending Blood tithe points do in fact confer to your heavy support daemon engines, so enjoy the carnage those can unleash in melee once they have a boost from the table. As long as you can manage to have enough speed to take the fight to your opponents in the form of transports, jump packs, or the gorepack formation, you should be golden. Make sure to grab a Daemon Prince HQ and bring the pain! Here are some more tips from our codex review to get you started. 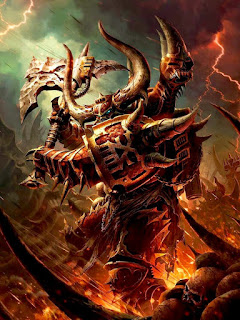 Khorne Daemonkin itself is a very recent codex and so has all of the special treatment and model production that comes with that, but it is useful to remember that Chaos Space Marines have been around for decades, and Daemons of Chaos have existed since the very first days of Warhammer Fantasy, which predates even the Rogue Trader days of 40K. Speaking of Fantasy, it looks like many of the new Age of Sigmar kits are going to be pretty nice conversions for Khorne beserkers or any other Khorne unit, so you will soon have a pretty readily available supply of people ebaying off the chaos half of their starter kits. This codex can ally itself in with just about any Chaos force the exists, including the Renegades & Heretics (Chaos/traitor IG/AM) from forge world to make for a fuller force if you are having trouble picking up enough Khorne-specific units. The general consensus is that this army is very good, and when a player has a grasp on the tactical use of the blood tithe you should have no problem meeting with success on the tabletop, making this a very accessible army for both veterans of the hobby and newcomers alike.

Does Khorne Daemonkin sounds like your kind of fun? If you have heard the siren call of Chaos and have picked up a force for yourself, let us know how it is going in the comments!