In this tutorial we will be adjusting our paintbrushes to match the sonic resonance of our paint as we take a look once again at the Skitarii forces and show you how to paint Ruststalkers. 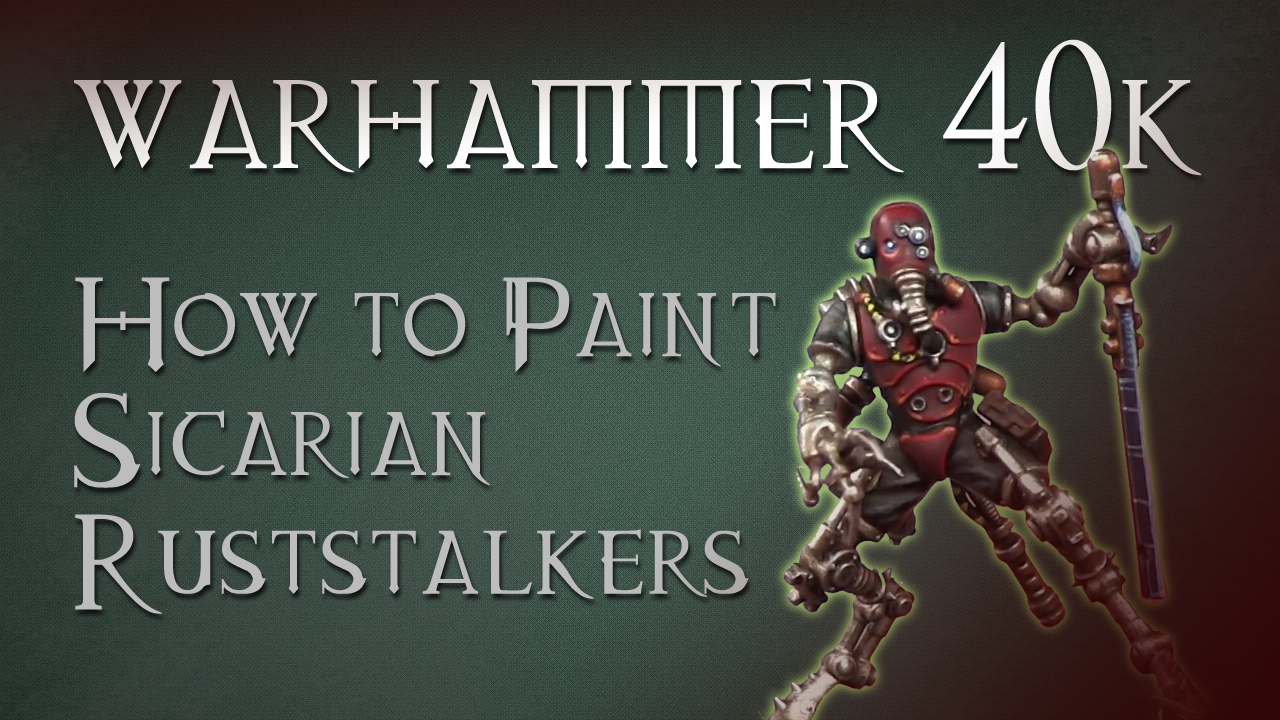 Making use of the Citadel range of paints we have a step by step guide for painting your 40k miniature. In addition to the written guide we have also created a video that takes you through the steps from basecoat to finished miniature.

Below you can find the list of Citadel paints required for this tutorial. 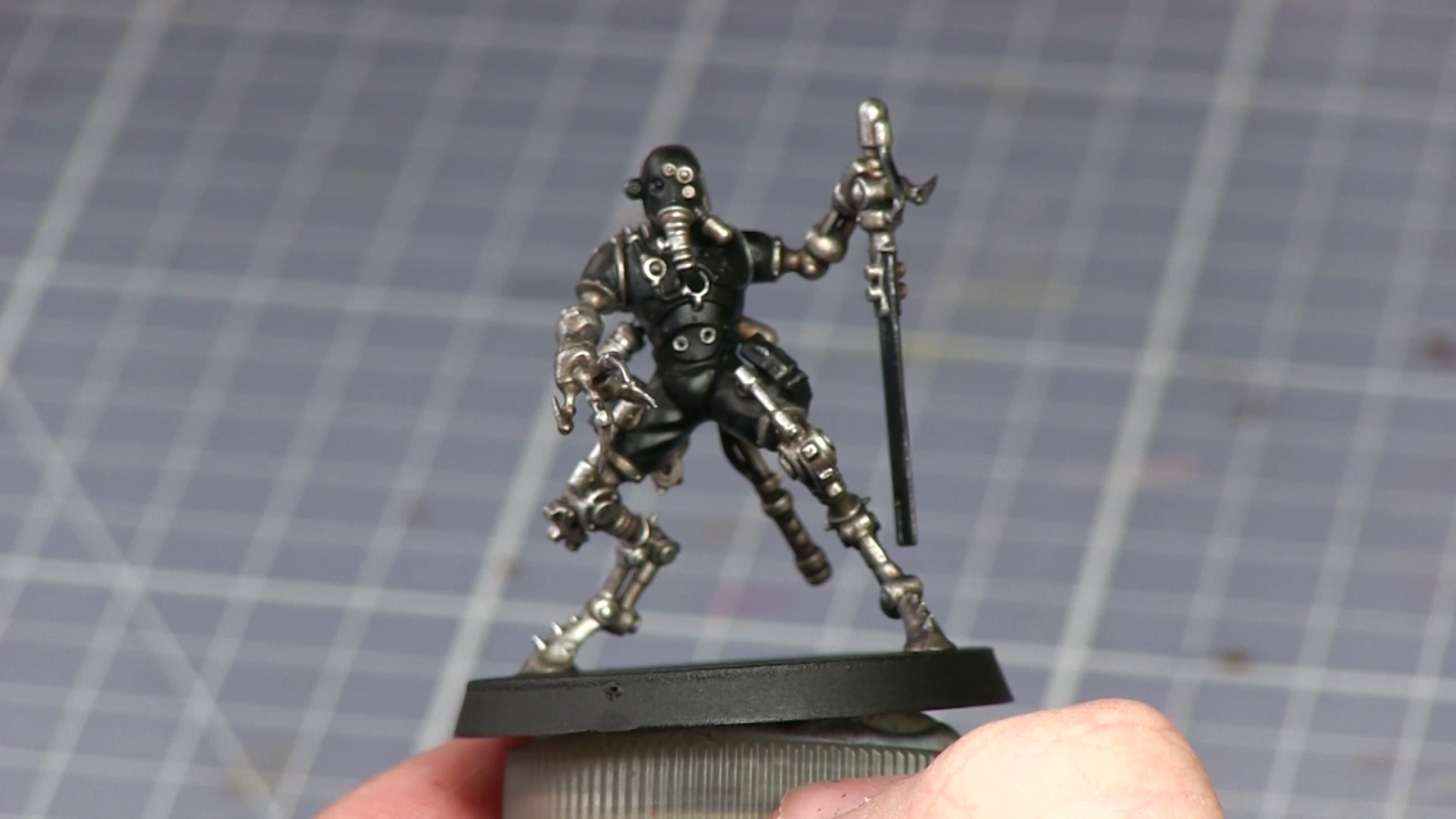 The first step of painting the armor was to apply a baselayer of Leadbelcher across all of the silver metal areas (limbs, weapon, bionics), It is not nescessary to be too neat or sparing at this stage as we can clean the miniature up later. A wash of Agrax can then used to bring out definition in the armor plates as well simulating and oiled metal effect. The final step was to drybrush Runefang Steel across the same areas. Alternatively you could layer this instead if you prefer a more pristine finish. 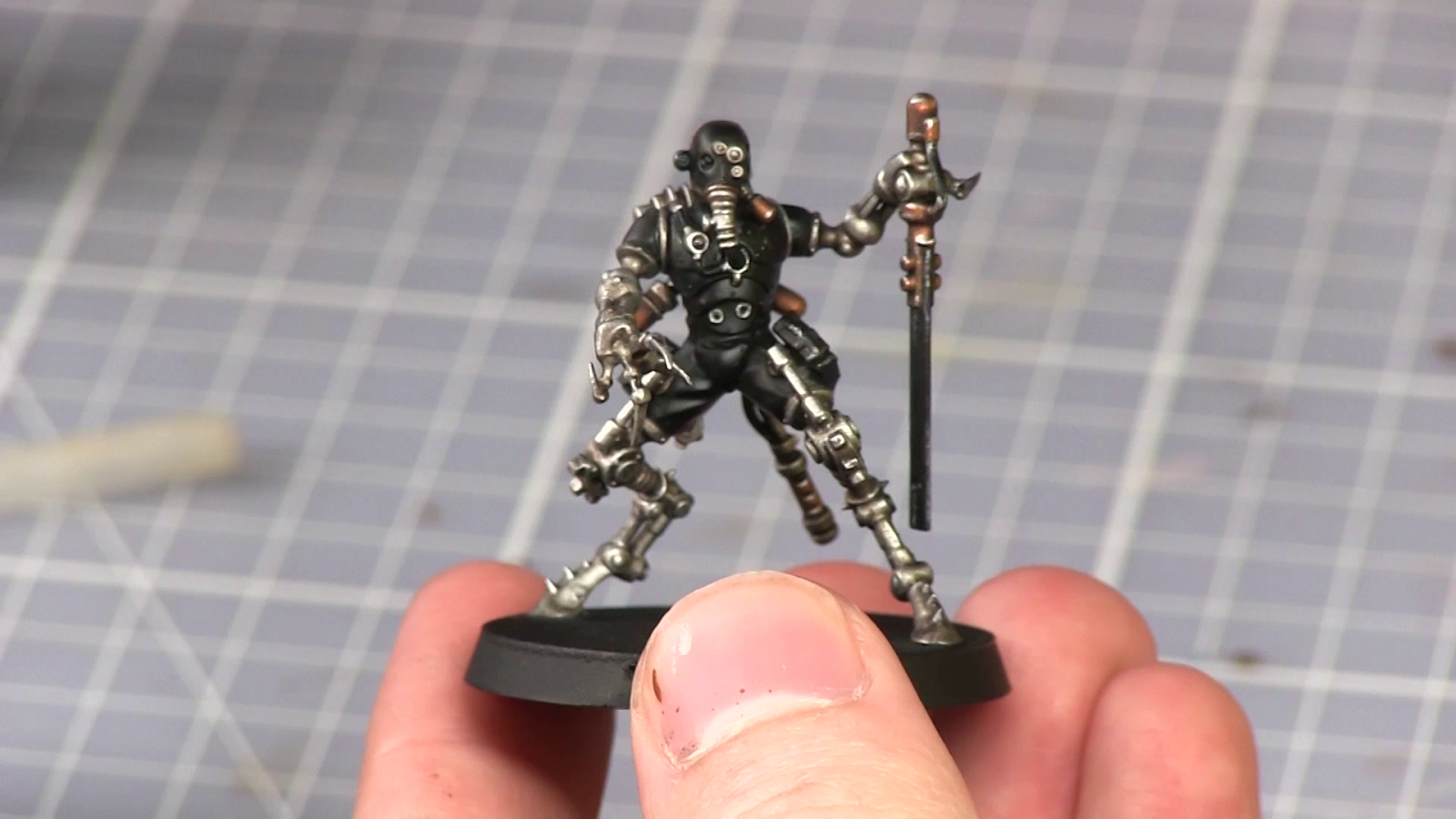 The brass areas include the detailing on the weapon hilt as well as some details. It is best to take a look in your Codex to find out what areas should be brass before tackling this next stage. Once you have picked your areas a base coat of Warplock Bronze should first be applied. This can then be followed by a layer of Brass Scorpian leaving the Bronze showing through the recesses. A wash of Agrax Earthshade will restore some definition before a final highlight of Runefang Steel across the edges. 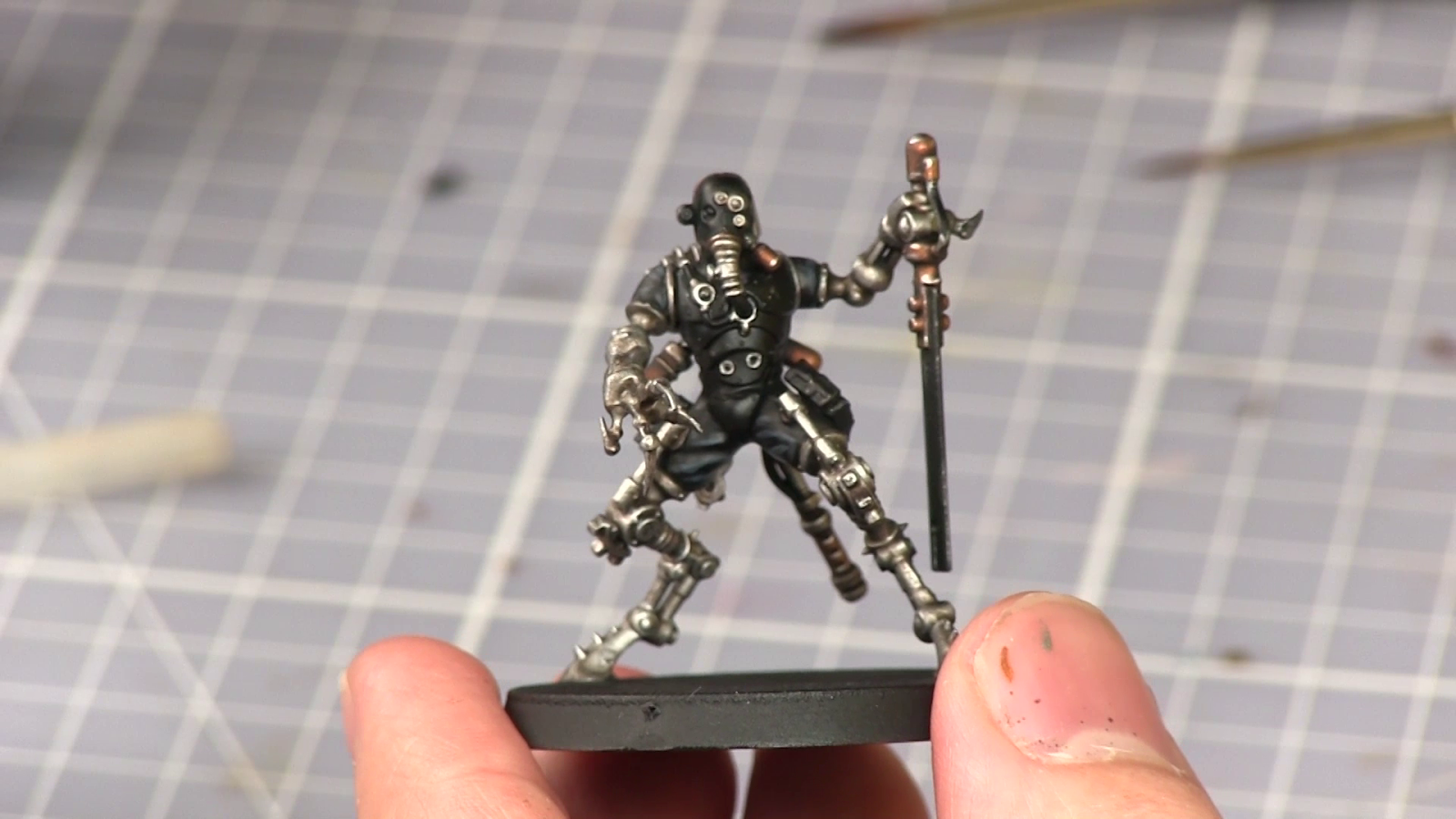 The pressure suit (visible on the thighs upper arms), Adeptus Mechanicus icons and pipes can be base coated with Abaddon Black. The next task is to highlight the edges of these areas with Dark Reaper. Optionally you can could use this stage to clean up some areas that the previous metal layers over spilled onto such as the robes and the leather areas on the backpack 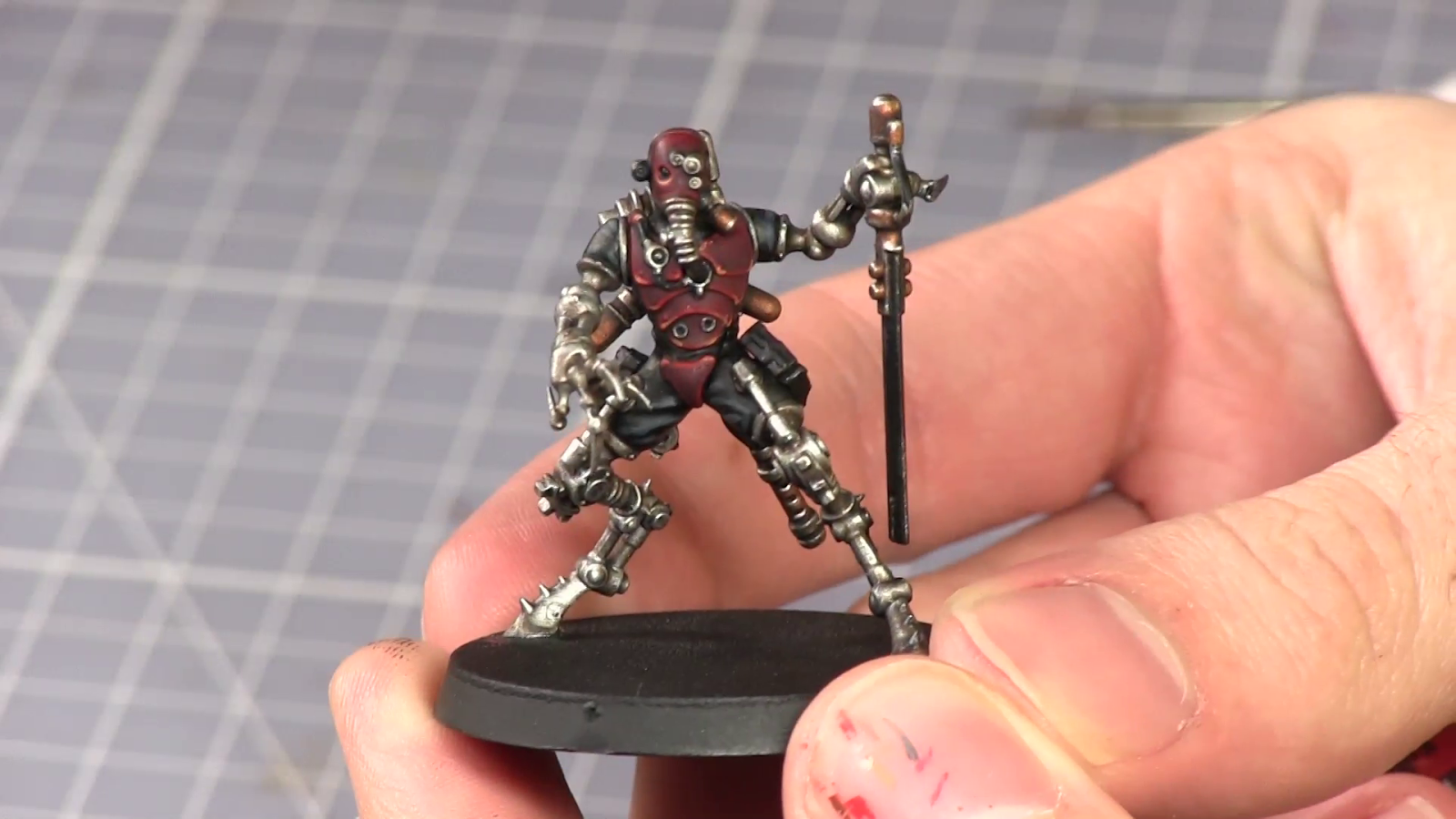 The armor plating on the chest and back should first be basecoated in Khorne Red. Being a Base paint should allow it to cover over the black easily. Once a nice and even coverage has been achieved a wash of Nuln Oil can be used to restore shading. The next task to highlight the edges of the armor with a thin line of Evil Sunz Scarlert. The final step is to then use Fire Dragon Bright as an extreme highlight on the corners of the armor as well as the upper edges. 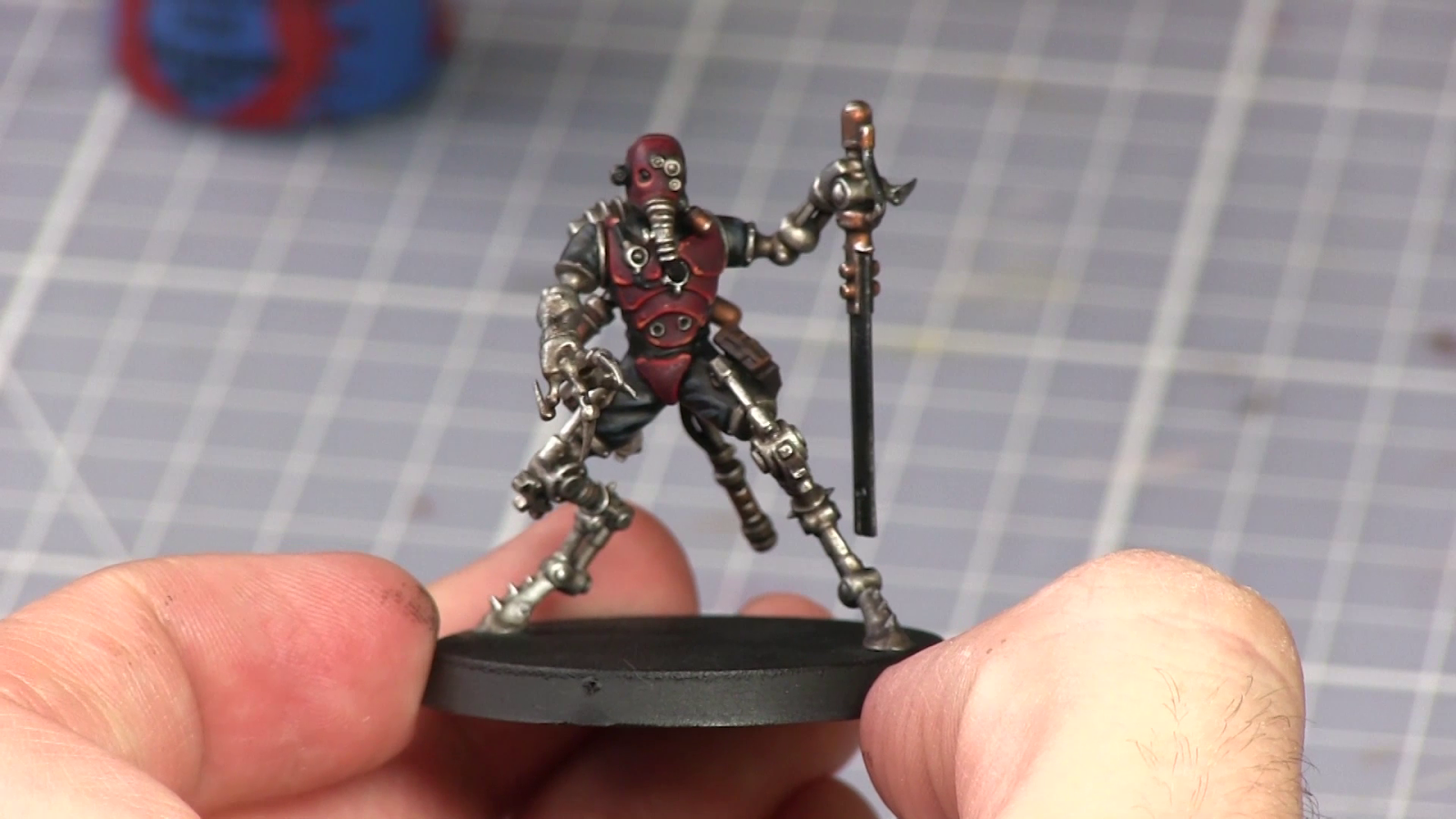 The leather pouches can be based with Rhinox Hide. Once a good even coverage has been achieved a wash of Agrax Earthshade can be applied to bring out the detailing. Following the wash, the edges can be then highlighted with Mournfang Brown followed by a thinner highlight on the upper edges and corners of Skrag Brown. 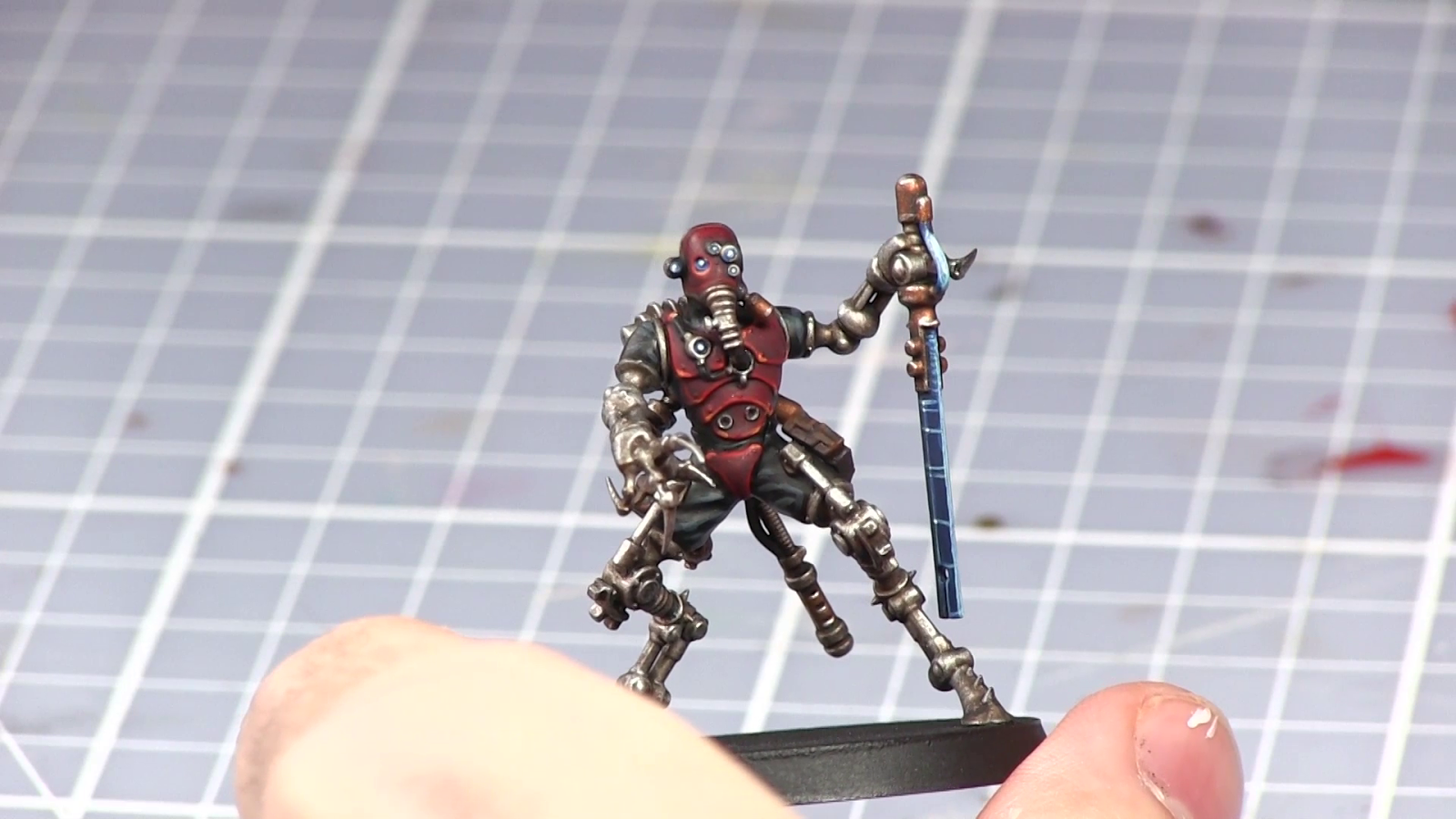 The transonic blade can be basecoated with Kantor Blue. This can then be followed by base coating the lenses with Caledor Sky. Additionally this color should be used to highlight the edges and to paint on the horizontal lines on the blade. The lenses and the lines of the blade can then be highlighted using a Bahharoth Blue. Finally a small spot of thin line of Ceramite White should be used to complete the glowing effect. The only remaining areas of the miniature left to paint are the chevrons on some of the pipes and the white half of the Ad Mech icon. Both of these can be basecoated with Celestra Grey. This can be followed with a layer of Ceramite White for the icon or Yriel Yellow for the chevrons. 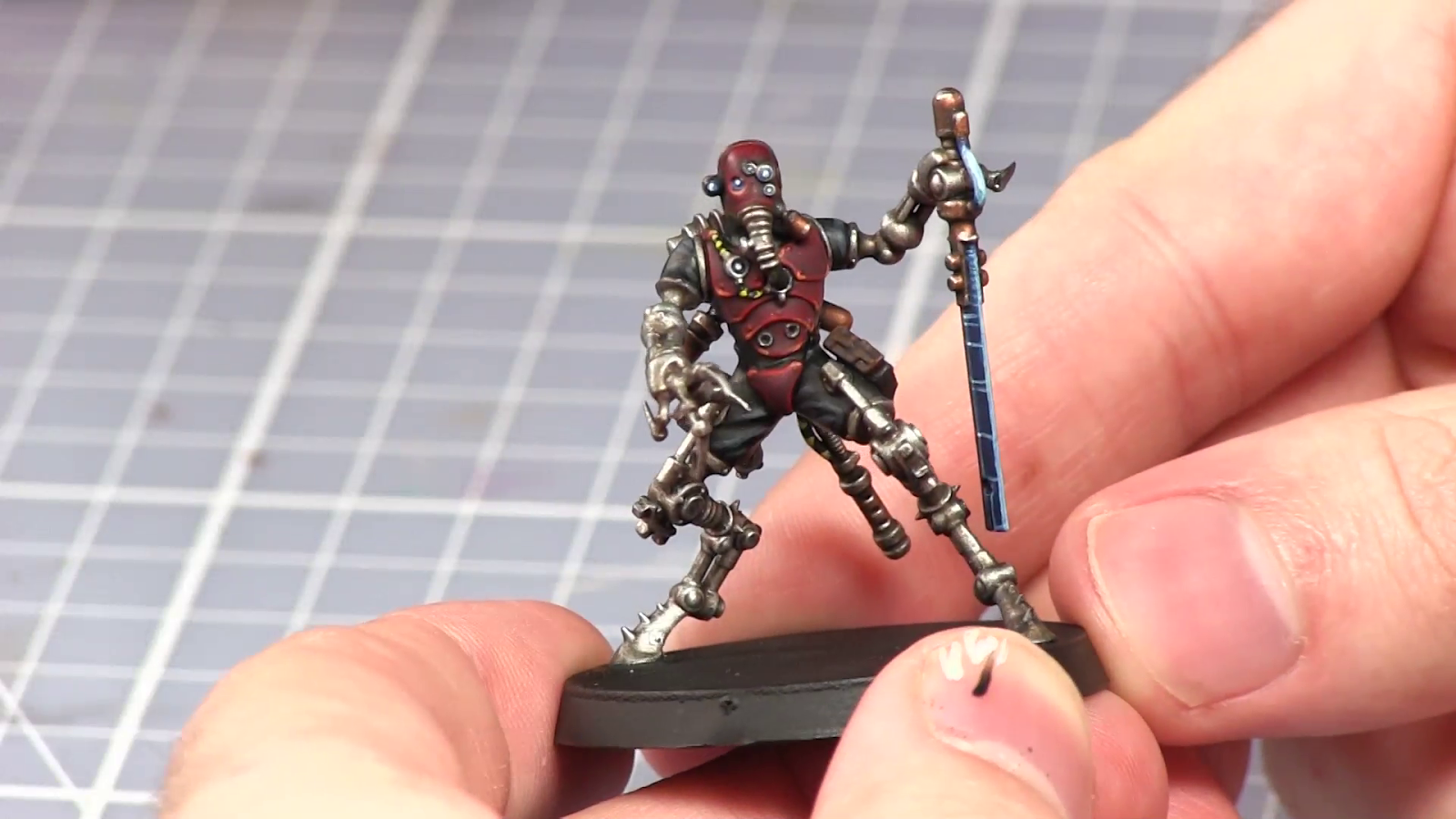 While this tutorial used a Ruststalker the same techniques could be used to paint the Infiltrators. To paint the Princeps, our previous Vanguard Tutorial should be consulted to find out how to paint the robes.
By Unknown