Tactics: Making The Most Of Terminators Normally terminators are too expensive to be worth it in a normal game. Everyone loves the idea of terminators but we don’t see them perform up to expectations, points cost, or fluff descriptions. Space Marine players the world over have struggled to make them work and often are met with frustration. What are the best ways to let them loose on the battlefield? Here are some options for getting the most out of your tactical dreadnought armour suits.

The Land Raider allows for relatively safe transport and is an assault vehicle. Normally you worry about getting popped and stranded with tons of points wasted, but It Will Not Die on the Land Raider with chapter tactics helps that. Plus, the termies will gain Feel No Pain as a benefit of chapter tactics boosting their survival a bit. This doesn’t help if they get doubled out by anything Strength 8+, but it’s still something and it’s free. 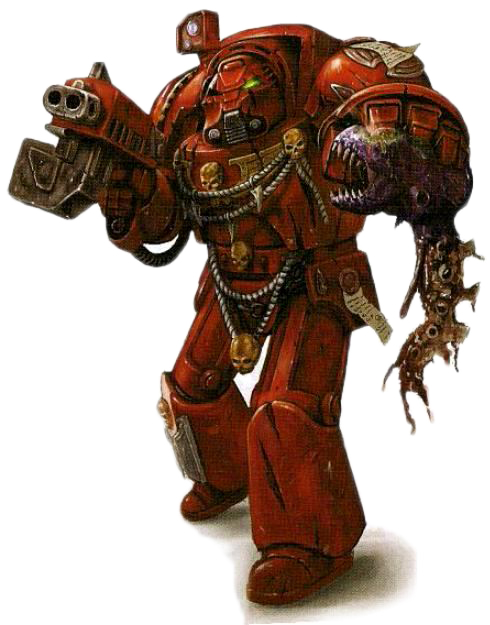 Blood Angels have the option with The Angel's Fury Spearhead Strike Force to assault out of deep strike immediately, without scattering, presuming you take stormraven gunships. This can get incredibly expensive, but it ensures your squads will get into combat without taking anything beyond overwatch damage. You might fail to have them come in when you need them unfortunately, but largely you can drop in some hammernators and let them go to town right away. You also have the option of a Land Raider and a sanguinary priest to keep them alive a bit longer if you would prefer to avoid the tax on the formation.

Ultramarines chapter tactics allows for a rerolled assault distance one turn per game. This requires some skill to set up, but you can make it so that you’re much more likely to hit a charge. This really is the only benefit you get there, and it doesn’t do much to address their durability issues.

Anybody can make use of a teleport homer, which will increase your odds of successfully bringing your terminators in where you want them, but Raven Guard can make particularly good use of this with their scout and infiltrate abilities. The termies themselves don’t gain any particular benefits from RG tactics, however, and they’re still mega expensive.

In my opinion this is the best way to run terminators if you’re interested in doing so. They look great, fit the fluff, the rules seem tailored to it, and they’re the most likely to be effective in-game. They also have the most versatility and breadth of options, meaning your terminators can be more than a one trick pony if you play this army.

Dark Angels Deathwing Terminator Squad: These are enormously fluffy and when painted well, make for an excellent centerpiece. It’s essentially the main reason to play Dark Angels. They will be expensive and vulnerable like all the other varieties, but you have the advantages of fearless and the ability to deep strike on turn one. They can be taken as troops, if that’s your preference, but you’ll be putting yourself at a severe model count disadvantage over your opponent. Deathwing is also one of the better ways to run tactical terminators as opposed to the assault variety, adding their splitfire ability and a greater weapon selection to the mix. In addition, they can twin link their weapons the turn that they deepstrike to put out some serious shooting early on in the game from anywhere on the field. These guys make terminators seem quite useable, and are essentially the only way to have shooty terminators become worth their points.

Deathwing Knights: The Dark Angels assault version of terminators are splendid once they are in your opponent’s face. You can increase their toughness if everyone huddles close enough together, carry a higher weapon skill than your standard terminator, and their power mauls can once a game pack a much larger punch in the event you run up against anything particularly hard. Points-wise, they can outduel any other elite unit you run into, and can smash hordes just as well, also benefiting from ‘You Cannot Hide’ which can thin out any commissars, nobs, etc that are propping up a horde you’re fighting.

Dark Angels also get the benefit of being able to take a venerable land raider and a power field generator to allow for more durability moving up the field if you would prefer not to deep strike. This can be used relatively effectively with the Deathwing Knights to circumvent the assault restrictions out of deep strike.

Hopefully this allows you to field terminators with a little more success. What ways do you like to run terminators? Do you have any strategies that work well for you, or have they been collecting dust on the shelf? Let us know in the comments.
By Unknown