Uncle Mike’s is an independent publisher, and their main product is Strange Aeons, a small-scale, 2-player horror skirmish game set in the early 20th century.  The setting is basically Cthulhu, but (to the designers credit) the horror world of Lovecraft has been expanded, and the game features a more skirmish-friendly narrative (no one wants to play a game in which all the characters die except one, who goes insane). 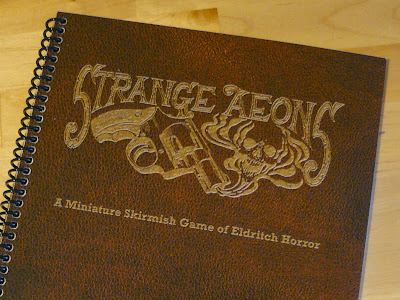 This is a quick, fun game with interesting and innovative campaign rules.  It is also a very small-scale game, which I like.  Sometimes the prospect of a new game is overwhelming, especially when you are expected to pay for the army book, the rule book, the faction starter box, and the special units (that you really need, even though they aren’t in the starter box) into account.

In Strange Aeons, you can literally play with just four miniatures, and it will be a fun and exciting game. Adding additional miniatures is, of course, part of the enjoyment, but extra miniatures are not necessary in abundance, and they can be added very slowly.
Furthermore, there seem to be a number of manufacturers who are making, or have made, models that fit well into this period and genre, and so a new player can find a number of bargains.  The game is therefore one of the more affordable ones available right now, and it’s perfect for gamers who don’t want to paint tens or even hundreds of new miniatures.
The game is currently being revised in a kickstarted 2nd edition, but this review is based on the first edition rules.  The Kickstarter promises a similar layout, but some cleaned-up rules mechanics and further development of the game world.  It should be available to non-backers at some point after August.

The game is very clearly laid out, and it’s organized in an obvious and user-friendly way.  The art is very much in keeping with the theme, and the smart little touches in the illustration and layout of the text does a lot to create the feel of the game.  I appreciate this sense of the theme, as the 1920s and the Cthulhu world are not usually settings that I can immediately imagine and get into. 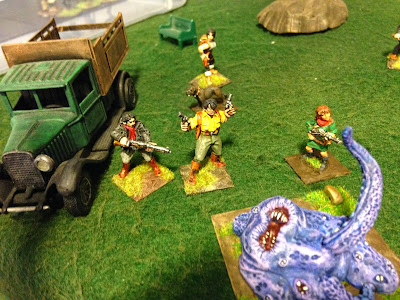 Like games such as Mordheim, this game can be played either as a quick one-off engagement between the government’s paranormal investigators and some gribbly monsters, or it can be played as a campaign.  The campaign play is one of the real strengths of the system, as it manages to provide some of the advancement and narrative of Mordheim and Necromunda, but it does so in better way.  Here, players never pit their teams of investigators against each other.  Instead, one player in a game always plays the monstrous antagonists, and she or he makes a one-time list to match the other player’s investigators.
This is a great way to run a campaign for a number of reasons.  First of all, it works well because each game of Strange Aeons takes less than an hour, and usually less than a half hour.  This means that two people can play two games in about an hour, each player taking a turn with her or his own investigators while the other player plays the monsters.  Also, playing the monsters as a one-off list allows you to expand out your miniature collection and add and use interesting new monster models.
Finally, while it is possible that your favorite investigator might get killed after a game, it makes all the difference that another player’s force isn't directly benefiting from it.  More than one of my close friendships has been tested after a bloody game of Mordheim, but Strange Aeons seems to have found a way for everyone to still like each other after a whole day of campaign play. 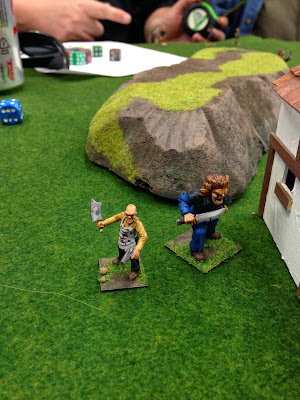 When a player’s turn comes up in the actual game of Strange Aeons, she or he nominates one of her or his models and “activates” it by choosing two actions (moving, shooting, etc).  Once completed, the other player nominates one of her or his models, and play continues to switch back and forth until one side wins.  The mechanisms for the fighting and the shooting and the courage tests take a round or two to get used to, but in general they are easy to learn and remember, and the game becomes intuitive pretty soon after starting.
The game play is made more exciting by the special rules of the game, which are very simple and clear, and which also are designed to make the game feel very true to its setting.  There are a number of events that might cause a character to go insane, for example, and the special rules add a level of tactical depth to the game without complicating the play.  For a quick demo/example of how the game plays, check out this Vlog by the great Teri Litorco. 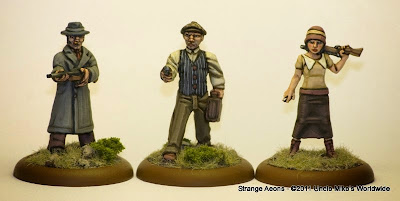 Uncle Mike’s has produced a number of very good miniatures for this game, and I recommend them highly (especially the Formless Thing, which is my favorite).
Besides these miniatures, though, early 20th century agents, civilians, and villains can be found from a number of producers, especially those with a “pulp” line (I recommend Copplestone Casting and Pulp Figures). 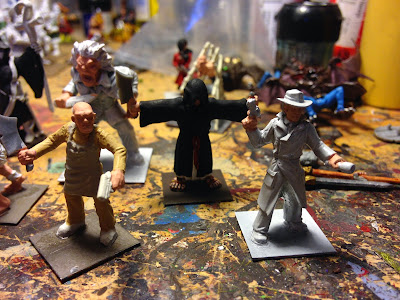 Because you need so few miniatures, though, I also find that some creativity can be used to re-purpose some old or out-of-use minis.  In the games that we play, for example, I have taken a knife to some old Heroclix minis and "Cthulhufied" them enough that they work with the setting. 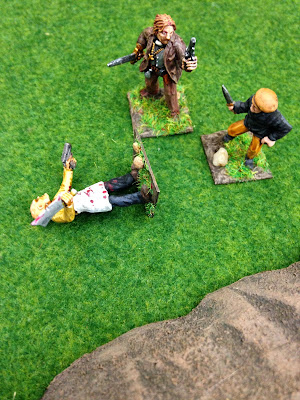 Strange Aeons is a very quick miniatures skirmish game that provides a great deal of enjoyment and excitement in less than an hour.  The dice mechanic takes a round or two to get used to, but all in all it's very simple, and it works very well with the setting and theme.

One of the true strengths of the game is the campaign and list-building sections, which allow advancement similar to games like Mordheim, but without ever fighting against another players group (because everyone takes turns building a list to be the antagonist against which the player groups fight).  I highly recommend this game, and I think it will be a great addition to both larger and smaller gaming groups and clubs.
By Ilan Mitchell-Smith