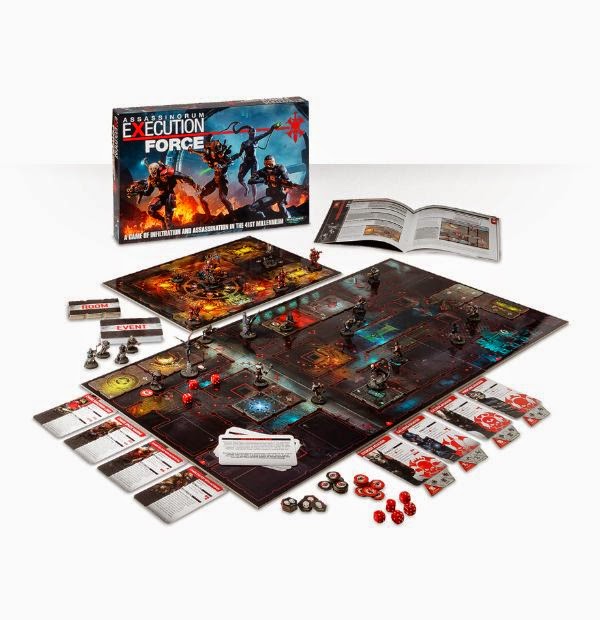 A buddy of mine managed to get hold of a copy of the Games Workshops new Assassinorum Execution Force game.  Armed with some snacks and a few beers, we cracked open the box and took the game for a spin.

Setting up the game is a fairly straightforward affair.  There are relatively few components (this is not a FFG board game!).  As well as the minis there are 4 board sections roughly A3 in size.  Three of these are placed next to each other (they don’t interlock) to form the main board and then a third which is separate representing the ‘inner sanctum’ where the head baddie lies in wait.

Each of the baddies get a single ID card with some art and their respective stats. On the back of the card is a picture of a painted mini. Place the stack of event cards, room ties, the double sided wound makers and the double sided stunned/alert tokens next to the board and your all set to start rolling dice.

As you would expect from GW the production quality of the game is really good.  The minis are the usual high quality and while we didn’t clip them out and build them they look like they will go together nicely and look great when painted. The tokens, boards and room tiles are good quality cardstock with shiny print.  The art work is as you would expect from the grim, all skulls and blood stains.

The general gist of the game is that you cooperatively control 4 assassins as they try to seek out and destroy the head Chaos sorcerer who is located in the ‘inner sanctum’ represented by a standalone board tile.  The assassins need to move around the board uncovering rooms looking for the control panel and the teleporter. Once uncovered and activated the action moves to the inner sanctum tile for the final showdown.   Trying to stop you doing this are the cultists and the chaos marine patrols collectively known as renegades.  These, once spawned on the relevant entrance, will follow a pre-defined path represented on the board path until they are ‘alerted’.

The game is played out in 16 rounds and each round is split into and Assassins phase and renegades phase.  During the assassins phase you take turns and take 2 actions, either, move 6 squares, sprint D6 , heal, shoot or close combat attack or expend one of your special abilities.  You can do these actions in any order but can’t do the same action twice.  As you move about you need to try and
avoid the renegades while at the same time getting line of site to the rooms marked on the board.  Once you do this you pick the corresponding number of room tiles (there is a number on the board) from the stack and place the one with the lowest value on the board.  This may or may not be the control room or teleporter and may or may not have renegades in. New minis that spawn in rooms start as ‘stunned’ meaning they can’t react. 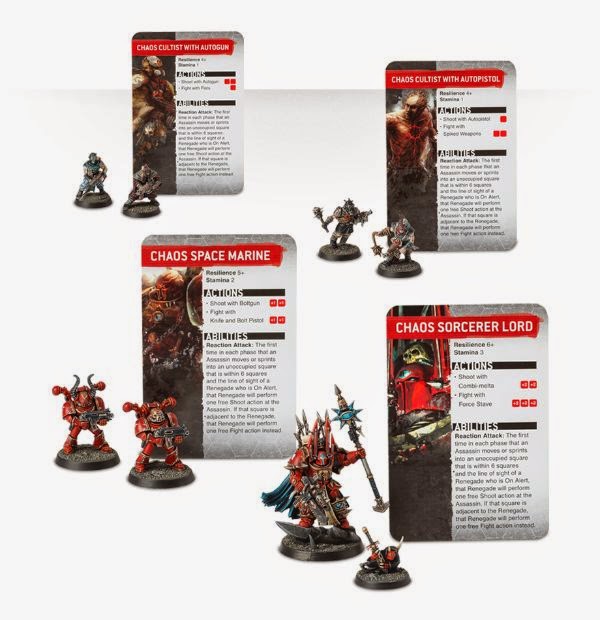 The renegades phase starts by drawing one event card plus one for every ‘alerted’ renegade.  These event cards generally spawn new minis, limit the actions you can do or otherwise try to ruin your day Minis spawn ‘on patrol’ until such time as they are alerted, either by a failed attack by an assassin (often the case last night as I kept rolling 1’s) or are in close proximity to someone that was attacked.  .  This influences the game play as its generally better avoid engagement with the renegades and keep as many of them ‘on patrol’ as possible so you have to draw less event cards  Once the event cards are resolved it’s time to move the minis in turn.  Those on patrol go D6 in the direction of travel marked on the board.  Those on alert go D6 towards the nearest assassin. Shooting and attacking if they have the chance. If an assassin moves into line of sight of an alerted renegade then it gets to have a reaction shot on the assassin.

Attacks are straight forward, roll the indicated number of D6, add the indicated modifier to the result, compare to the victims stamina (4+,5+ or 6+) and take a wound off.
As well as the overall objective of killing the sorcerer, there are a number of ‘objectives’ for the assassins.  There not really missions as such, just conditions that you need to be met such as complete the game without taking a wound, don’t shoot anybody etc etc.  These add another layer of depth to the game. There are a few other things to think about but that’s generally it.

Let’s just get this out there; I’m not really sure about this game.   This is a shame as I was brought up on a staple of 40k and GW board games such as Talisman, Advanced Hero Quest, Space Hulk and Blood Bowl and was quite looking forward to it. 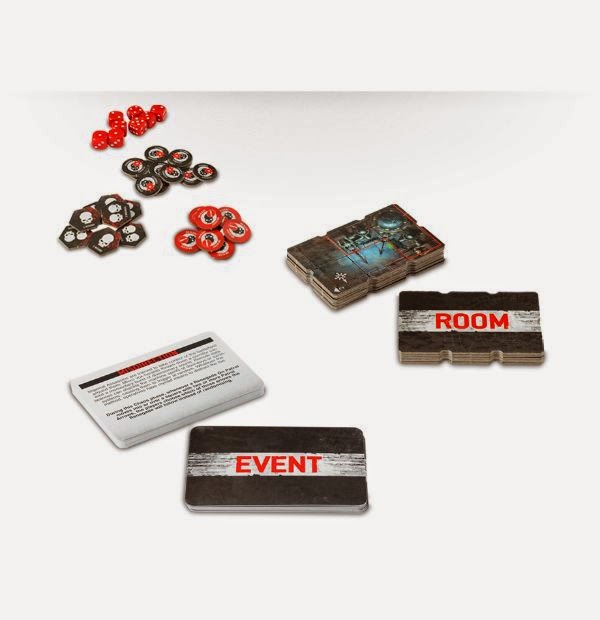 In and of its self the game works, the mechanics are simple and its quite fun trying to scoot around the board trying to find the right rooms and pull off a stealthy kill or complete the mission without firing a shot. Once you have the rules down you could rattle through this in about 45 mins to 1 hour which makes this a pretty good pick-up game. This is both its strength and its weakness.

The real issue with it I think is the price point.  Execution Force is a pretty thin game in terms of depth and is par with games in my collection like Pandemic, Android Infiltration, King of Tokyo and maybe Last Night on Earth.  Clearly these examples are all different in terms of theme and over all mechanics but what they have in common is that they are all fairly straightforward and don’t take that long to play.

When Execution Force is compared against these it shines a spotlight on the price point.  At £75 this is a very expensive pick-up game. The ones I’ve mentioned above can be picked up for £25 to £35.  True they don’t have cool mins but they do offer a fun game night experience when you don’t have time to do a 2000 point game of 40k.  For £ 75 you could pic up Twilight Imperium, the epic 12+ hour king of board games and have a bit of change left over for game snacks.

Overall Execution Force is a very expensive pickup game and if it’s a pickup game you are after you there are cheaper and equally good, if not better ones out there.   If you are looking for a rich deep game which offers a lot of tactical depth and then again this perhaps isn’t the one for you.  This is not least because there are more involved, richer, deeper games out there that are more interesting, simply offer more and are cheaper.   Examples form my own collection Level 7 Omega Protocol, Dead of Winter, Spartacus which you could pick up from £35 -£60.    If its minis that you are after then maybe this will work for you, as you will get a bunch of cool GW minis and effectively a free game.

By Vman
By Unknown