Narratives Workshop: How To Breathe Life Into Your Gaming 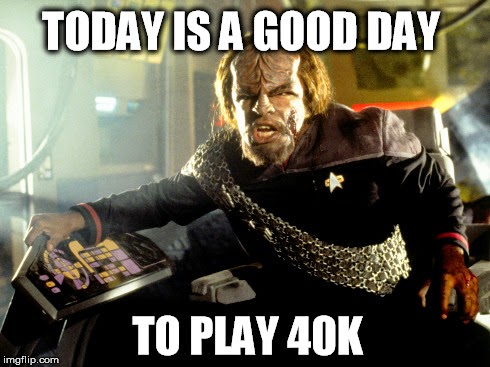 So you've found yourself staring across the table at yet another netlist. You have min-maxed your force, optimized every upgrade and applied force organization chart trick you know, and you're sure that your opponent has done the same. He's the same person you play every Friday, or she's your foe for the first round of this tournament. you roll the dice, push your toy soldiers around the field, and at the end of the game, it feels a little stale. How many times have you played this same mission? Sighing at your defeat to the most recent codex-creep flavor of the month power army, you begin packing up your army. Slowly, your mind starts to flirt with the idea of just watching some movies next weekend and saving yourself the hassle.

This Is The Greatest Time To Be In The Hobby

For some, competitive, win at all costs bone crushing games are the only thing that get your heart racing. If that's the case for you, then read no more - but it does make me wonder why you haven't moved on to video games where cheaper, faster, and more balanced play exists. The fact that you are reading this blog in your spare time means that there is likely much more to this hobby for you than winning and losing, and if so, then it truly is a fantastic time to be involved in tabletop wargaming.

Games Workshop has, for all intents and purposes, appeared to abandon the competitive and tournament aspects of their gaming systems. Fortunately there are members of the community who have picked up the slack and prepared an number of comp systems, special missions, tournament rules, and other measures to make the game as fair and competitive as possible, and I applaud them, but there are tremendous opportunities to take your gaming in the new direction GW seems to be heading for. Whether they intended to or not, abandoning the presumed balance of the game amid statements akin to "we're just a models company" has allowed for more options on our front.

The most recent clutch of codices that have been put out by GW have included what many are calling "Decurion Style" detachments. While on their face these seem engineered to help sell flagging models that are less profitable (Take three of these models nobody fields and your entire force gets marvelous benefits!) I see nothing but opportunities here. In the past, it was pretty evident which models were necessary the have a chance at winning and which should never be selected. A Tyranid player who loved the concept of pyrovores and genestealers likely didn't find much success, and so every time you faced off against the bugs you were met with multiple flying hive tyrants, as an example. This led to stagnation, and for any given army you were likely to only face one or two builds.

Now, with the advent of these detachments, and the general wildness that the rules seem to be including, things are changing quickly. The allies matrix has opened the field up to many different combinations, and new forces/mini-dexes are popping up left and right to compliment the more established factions. Some will cry that this will lead to even more rules-abusing lists, but I see it differently. We now have so many options and ways to play a given army that I believe we will see much more variety in the composition of army lists and there will be more ability for players to find reasons to take a model with a sculpt or fluff that they love. Many Eldar players lamented the lack of effect Howling Banshees and Striking Scorpions once had on the table, but with their newest rulesets they can be fielded with more success and we will likely see something other than the traditional Wraithknight and Wave Serpent laden forces.

Previously, it seemed that almost every game played featured some form of 'you line up there, I'll line up here, we run at one another and see who died the least'. A focus on kill points dominated the older editions of the rules, and more recently the game has focused on securing objectives in a king-of-the-hill format. Once 7th edition dropped and introduced the concept of Maelstrom Missions, fans around the globe cried out about the random nature and competition-breaking features the card system contained. Once again, their objections are valid, but I think we have been missing the point here. Maelstrom missions are in no way a requirement for playing the game, but exists as yet another option in the quickly expanding buffet of GW modes of gaming we've been introduced to. You certainly can house-rule your decks, create your own cards, or any other method of modifying the maelstrom missions to your liking, or ignore them altogether. I don't feel that they lessen the fun overall, they just give you another way to play if you so choose.

In addition to the missions presented in the main rulebook, it is entirely possible to create your own missions to enhance your enjoyment of the hobby. Many members of the community have created their own missions, and have presented them online for you to find or as inspiration for your own projects. Tournaments often have their own set of missions in an attempt to make things more even and competitive, but you can certainly make your own to steer the game to any end you wish to play with. Forge World's Imperial Armour books have many creating and exciting mission designs, even stringing them together into campaigns that can be modified to fit any story you create or armies you would like to play. You don't even need to make the missions 'even' or 'fair' in the traditional sense - many of history's greatest battles featured situations that greatly favored one side, and the other could scrape out moral victories from side objectives or just holding on a bit longer than expected.

Ultimately, how you enjoy this game is up to you. Some people feel tempted to rage quit or move on to other gaming systems in light of the changes we're seeing come out of Games Workshop, but I think we can certainly find ways to maximize our enjoyment if we explore the vast set of options made available to us. I truly feel that this is one of the best times the hobby has experienced in a considerable time. The 40K rulebook has long promoted the concept of having fun being the main objective of the game, and that you should make any interpretations or changes to their rules in a way that allows you to have the most fun and "Forge the Narrative" in the way that best suits you. I personally take more enjoyment out of making a grand story out of a mission or campaign, giving life to the toys on the table and adding gravity to the situation beyond some dice-generated statistical gambles. How we enjoy this hobby is up to us, and with so many new developments appearing, we have a tremendous ability to shape the game to our desires and make the most of our hobby.

How do you feel about all of the new developments coming from GW? What ways do you most enjoy playing or storytelling with your models? Let us know in the comments!