Fantasy players and prospective new players are unfortunately caught in somewhat of a limbo position at the moment while we wait for 9th edition to drop. We have been understandably hesitant to buy or move forward with anything when we do not know what exactly is to come. What are we to do as we await the newest edition (or total reboot) of the game?

One of the options available to us is to continue playing 8th as we have been. Seeing as nobody really knows what is to come or even when it will come, despite the rumors, it could be beneficial for some to just keep playing as normal. This allows you to keep playing the game as you have been, and behaving as if none of the new developments are coming and staying in a sort of stasis for 8th while it lasts. The obvious benefit here is that you don’t need to concern yourself with the wild changes inherent in the End Times rules and fluff, which cuts down on familiarization with a ruleset that will be discarded for 9th soon enough anyway.

In addition, if you are like myself and quite enjoy 8th edition, the coming months may well be your last real chance to play the type of battles that we have become accustomed to, since once 9th arrives people will almost universally migrate  to that system or quit altogether. It’s nice to imagine that your gaming group could continue using 8th edition perpetually if you don’t like how 9th shakes out, but realistically you won’t be playing too much of 8th edition a few years from now, so let’s try get some more games in while we can. 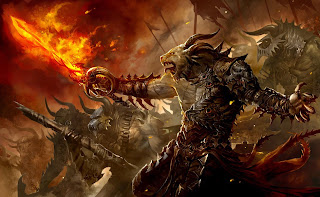 Alternatively, you could dive headlong into The End Times. The rules themselves are a little ridiculous, and you will have to figure out which books apply and which do not for any given scenario you are working in, but The End Times are a great way to shake up what you have been doing for the past few years and get in some new perspectives on your gaming. Legion rules, the change in Magic, access to Undeath, and what is being called ‘Fantasy Unbound’ might not make for particularly competitive or fair matches, but can be a lot of fun if you take it in stride and treat your games like a beer & pretzels adventure rather than hyper-tournament mode of play. In addition, the story-specific missions are an excellent way to immerse yourselves in the story, and since it’s likely we’ll see a total reboot of the setting, might be the last chance you have to play with some of your most loved heroes or locations. Plus, the setting really lends gravity to your battles, even if the overall endgame is somewhat predetermined.

Many a wargamer has a few models, units, or entire armies that are midway through a painting or conversion project. While everything is temporarily ‘on hold’, now is as good a time as any (perhaps the best time, really) to finish off whatever things you have been intending to complete. We don’t well know what units will still be usable in the coming edition of the game, and if you want to take a defeatist or a wait-and-see attitude to the whole thing, you will sit on those projects until you can be certain you will still make use of them at some point. I contend that it would be better to take the more optimistic route and blast through those projects.

So what if Lizardmen aren't in the new game, you’ll still get the pleasure of seeing a completed unit in your miniatures collection, a chance to practice some more of your hobby skills, and will have some finality and closure to the armies you might be leaving behind. Plus you never know, perhaps that unit you have been putting off will be in 9th edition, and could well be one of the most powerful in the game! Then won’t you be happy you have one painted and ready to go?

If the suspense and lack of information is making you hesitant or uncomfortable, it doesn't mean that you have to sit the next few months out, either. If you play any other games, you might take your creative energies and put them to use there.

Maybe you have a 40k army that could use its bases embellished, or you have been meaning to read a black library novel. Now might be the perfect time to check out other game systems you have been curious about and maybe have a test game learning with some people down at your Friendly Local Games Store.

You could also apply your hobby talent to something you know you will need in 9th regardless of how the details shake out by building up some terrain or making your own home gaming table. Just because we don’t know much about the future doesn’t mean we have to put everything on hold.

How are you handling the wait for 9th Edition? What projects do you have in mind?