Editorial - Knights and Knights, We Are All Robot-Jox Now! 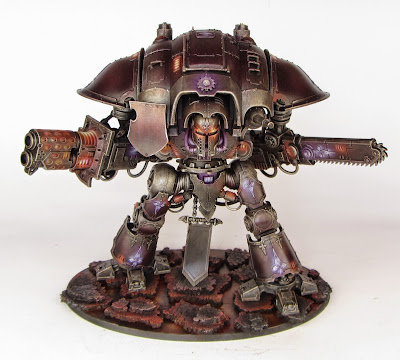 It's been a long time, or so it feels, but I have finally gotten my first game in with the new Eldar book, and I am delighted to say it was a corker. What follows is a commentary, thoughts I have had on the fight and certainly not a bat-rep or full-on tactics article. The guys here on Talk Wargaming are entirely more well-versed on these subjects, and you should go to them for wisdom. For now, I have some observations that may provide insight and entertainment, one way or another. 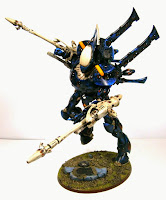 My opponent for the evening, who has been heard to say (literally) that "the sky is falling", has been very, and only some times light-heartedly, vocal about the new Space Elves. Previously we have had his Tyranids smashing my DA all over the shop because apparently I can't marine and he's a better player than me, but now its all gone Eldar, and his Nids have been crushed a couple of times (I think he let fear control him), Dark Angels combined-wing made a great showing and now we are on to IG.

He and I have spoken previously about the difficulties for the lists I want to bring. IG sounds like a real challenge, and happens to be an army my opponent is happy to play and collect. For reference, my kind of list is swooping hawks, and wraith knight and lords, and some friends. I like the dichotomy of whispy pewpew units and trucks with hammers like the lords. Against my admittedly self limited list, 5 Russ, Hellhounds, an Imperial Knight and mechanised troops provides a high number of similar targets and one big stick. All of these targets are capable of hurting Eldar, and leaves me really with only two choices; get stuck in playing football with the tank gun line, or take on the other side of the field with the Imperial Knight. It's worth pointing out that as it stands, my Wraith Knight is Suncannon equipped, so no Strength D, which makes the Imperial death machine a very interesting prospect. In response, I took 6 Wraith Guard in a Serpent and Eldrad for the scout move, so ultimately his big stick didn't get more than half way across the table, but it cost me 505 points for that combo, to have my best chance at nuking sub-400 points. Not that I'm complaining, two apocalyptic Eldritch storms from Eldrad really helped my cost-to-kills ratio.


I was surprised at how the Imperial Knight performed; STR 9 AP 1 pie plate did some damage, but not game changingly, however there was only one assault, on a Serpent, in the whole game. I expected much more of that which I use my WK for; lots of movement and positioning, timed charges to take out more threatening units and more overall menace. Keeping something like that back for two turns really opens up the board to your opponent and gives their big nasties room to breathe. This reinforced by my remaining units on the table at the end, Wraith Knight had 5 wounds left, and only touched the Imperial when it had only one HP left and I could reliably off him in one go.
I also had two Wraith-Lords right up until the last turn and a hale and hearty unit of Swooping Hawks ( <3 ) . The enemy Knight removed half a squad of wraith guard, Eldrad and some Dire Avengers before it exploded, which apart from Eldrad wasn't a massive problem. As a fair balance my own knight didn't perform as I'd have liked, but if you forget its now a gargantuan and don't take advantage of stomps, or remember FnP then that will happen.

There are almost two separate games on with these monstrosities, that of the main force and that of the giants. Whilst they obviously interact heavily I find it much easier to play a dance of death, almost compartmentalising the areas of the fight that are by themselves going to force a lot of counter-play if only for the size of their bases and general threat. I feel that the commensurate power and size of things in context with the table top has been captured well; towering war-machines with battle winning abilities and the enemy counter-tactics necessary to survive and win. Has anyone ever seen Robot-Jox? Watch Robot-Jox, it puts me right in the frame of mind for this, and everyone else should appreciate it.

you know, for all the ripping of "FOARGE TEH NARATIV" I've really started to get a feel the cinematic experience that some of these games can now give us, drawn from one of the richest and most developed Sci-Fi universes around.

Achilles: You can live.
Alexander: Yes, if I kill you with this!
Achilles: We can both live!
Alexander: We are already dead. We are Robot Jox!


So, have you had any particular fun games with smashing great robots or tanks? Maybe you still feel there is no place for such things in the wider game, shout up, let's hear what you have to say!

Cheers, and catch you guys soon.
By Unknown