Editorial: A Beginners Guide To Kings Of War 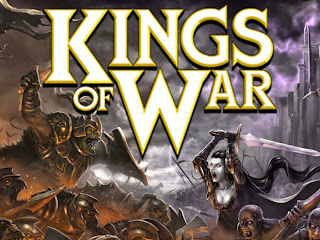 First of all lets get the semantics right here, when I say a Beginners Guide I mean a guide by a beginner. I have clocked up a mighty two games of Kings of War and have only recently completed building my first full sized army. I am also entering the northern regionals of the Kings of War tournament in just over two weeks time. Yes you read that correctly. Two games under my belt and I'm entering a tournament.

Those of you who are more familiar with Warhammer Fantasy will probably consider me either over confident or just plain crazy. Well allow me to take this opportunity to prove my sanity and explain why it isn't that strange after all.

"Simple But Not Simplistic"

Kings of War, put simply, is extremely easy to learn. This is mostly due to a lean rule set designed by wargaming legend Alessio Cavatore. The core rules fit nicely into a 31 page A5 mini rulebook and that includes some simple unit listings for the most common forces of Kings of War. However, while the rules are simple to learn they are in no way simplistic. This allows for an extremely fun, in depth game that can be picked up over the course of a 30 min demonstration game.

What allows an entire game system to be crammed into a relatively short demo game is how stream lined it is. The game itself features all of the usual units, heroes, shooting, combat, magic e.t.c that we are used to in Fantasy wargames yet a lot of the chaff has been removed.


A prime example of this is the way wounds are calculated. Lending from systems seen in historical wargames, Kings of War does not feature the removal of wounded miniatures from your unit. Instead your 20 man unit stays that way and wounds are simply counted up using dice or other markers. This makes a huge difference in terms of the speed of play. Time is no longer spent removing casualties and keeping track of your units remaining strength. It doesn't sound like much but over the course of a full game the time saved does add up.

So now that I've stated just how easy Kings Of War is to get into its only fair that I explain how you can start down the path yourself. First of all, now is a fantastic time to get into the game. With the version 2 rulebook just around the corner, two new forces and additional units for existing ones there is a lot to be excited about.

For those of you who already have existing fantasy armies, good news! You can get playing Kings of War immediately. Simply head over to the Mantic website in order to download a free set of rules that you can use to get started with. The rules can be found HERE.  If you don't have any existing forces then you could always keep an ear out for one of Mantics pathfinders running a demo game in your local area or even head down to one of their open days. Not only will you be provided with a fully painted army to play with you will also be guided through all of the games concepts as you play. You'll also be able to pick up the Kings of War Starter Set which contains two small starter forces, dice and a starter rule book all for the reasonable sum of £50/$85.

So what are you waiting for? Check out the rules and see for yourself just how easy and fun they are to play. If you're also new to Kings of War tell us about your experiences so far in the comments.