Army Selection: Are Craftworld Eldar Right For You? 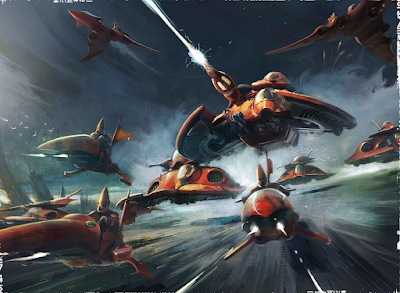 If you have been interested in getting into playing Warhammer 40K, or are looking to add another army to your collection, one of the challenges you will have is deciding which force to collect, paint, and play. How do you go about picking an army? Common advice is to go with whatever looks the best to you on the tabletop and whose background you enjoy most, since competitiveness comes and goes with updates, rules changes, and edition shifts. However, some simple play-style features are worth considering as well, regardless of their current standing in the competitive pecking order. One force you can choose is the Eldar, an ancient race that once spanned the galaxy but fell to ruin due to their hubris and arrogance. If Eldar don’t happen to be your cup of tea, you can check out other army selection options here, but for now let’s dive in to one of the most iconic races of the Warhammer 40,000 universe. 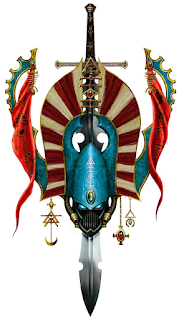 Far back in the galaxy’s history, before humanity was even a glimmer in a lungfish’s eye, there existed a race known as The Old Ones, who created the Eldar in an attempt to use them as innately psychic soldiers in a war against the Necrons. Things didn’t go so well for The Old Ones, but in the aftermath of that war the galaxy was largely empty of life that could oppose the Eldar and so they set out colonizing and terraforming the planets that met their standards.

Eventually the Eldar became the unrivalled masters of the galaxy, having created an empire that spanned the stars. Through the development of the Webway, a series of dimensional tunnels that allowed for fast interstellar travel without the use of the warp, the Eldar were unparalleled in their dominion: masters of the greatest civilization the galaxy had yet seen, or so they believed. As life became easier and all challenges were mastered, the Eldar slowly became complacent, their arrogance and superiority over all other races feeding their egos. As they began to seek out new experiences and pleasures in an attempt to make meaning and purpose out of their lives, they began a perilous descent into what was to come.

The Eldar are an innately emotional and psychic race, capable of feeling the highs and lows of life far more acutely than a human could hope to. As a result of the ennui brought on by the absolute ease with which their lives had become inundated as well as their incredibly long lifespans over which their boredom could be spread, many sought ways to bring more excitement and variety into their otherwise dull existences. Things may have started out pretty tame, but eventually the more enthusiastic parts of the Eldar race were holding cannibalistic feasts, sexual aberrations, torture festivals, and pretty much every drug-fueled depraved thing their expansive minds could come up with to satisfy their desire for novelty and entertainment. As their excesses and debauchery reached ever higher, something sinister began to grow in their hearts, and correspondingly within the warp a new power began to gestate. 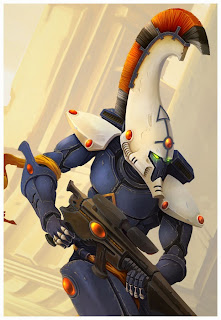 At some point along the way, a portion of the Eldar decided things had gone far overboard for their tastes and decided to leave the empire. Some of these groups began to construct Craftworlds, which are planet-sized ships which they boarded and set out to escape what their culture had become and live their lives in a way they felt appropriate. Fortunately for the few who set out early enough and got far enough away, this allowed them to survive ‘The Fall’, a horrific event corresponding to the birth of Slaanesh, or 'She Who Thirsts', creating The Eye of Terror and catastrophically tearing a hole in reality, dooming the Eldar race and casting their society into ruin.


As Slaanesh continually seeks to consume the remainder of the Eldar souls, the craftworlds travel ever onwards, contained societies within themselves filled with the puritanical surviving Eldar. Only by adhering to strict ‘Paths’ do these Craftworld Eldar maintain focus and allow their civilization to live on, the last few survivors considering themselves the true heirs to the legacy of their shattered empire, a dying race not content to go quietly from the grandeur they once possessed. 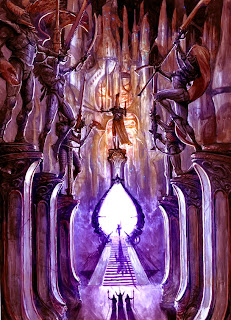 In appearance, Eldar are at their core the elves from the works of Tolkien cast into space. They feature elaborate curves and flourishes to their vehicles and armor, combining sleek elegance of design with the patrician features of the elven stereotype. They are commonly seen as one of the ‘prettiest’ armies, their visual appeal is broad. They have advanced and ancient technologies, evident within their intricate weaponry and their futuristic anti-gravity vehicles all with sloping aerodynamic appearances.

In terms of modeling and painting, the Eldar are definitely a delight for the artists and collectors among us. With a relatively wide selection of craftworld themes to choose from, different color schemes and iconography are available to tie your models into the heritage of one of the existing craftworlds, and you have the ability to create lore and colors for your own if you desire. In addition, the Eldar have what are known as Aspect Warriors, which are dedicated paths that individuals can take wherein they don specific sets of war gear and represent one of the facets of war in their world view. These all follow their own special colors and patterns, allowing for an army to have a wide array of coloration throughout and can really add accent to a force and break up the monotony of a two or three-tone army one might see with other races. 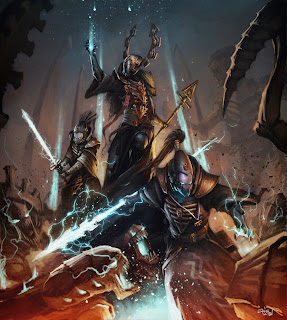 Eldar are interesting to consider from a gameplay standpoint because there is a tool in their codex for any job. Many armies suffer from a lack of mobility, poor assault capabilities, mediocre or no psychic ability, bad armor, or any number of flaws, but in the Eldar, you can tailor your force to be able to accommodate any plan you have in mind or preference you have when playing. Ultimately, what this means is that however you would like to play Warhammer, Eldar have a way of allowing that to work for you. The challenge lies in using the tools correctly and having a sound strategy.

Most units in the Eldar army can be described as specialists, designed specifically for a certain task. Most of the time, every model in the unit has the same weaponry, so you will not have to keep track of multiple guns, but if you find your only tank busting unit in a situation all the way across the board from tanks they likely will not have the desired effect. You will need tactical flexibility and some foresight to be able to position the right models in the right place at the right time, but if you can do that then Eldar will be able to deliver you the victory nearly every time. The current iteration of the Eldar codex is very powerful, and nearly every unit and build is viable competitively, so you should be able to find success in nearly every arena if you are able to master the army.


The Eldar have had models in circulation from all the way back to the beginning of Warhammer 40,000, which means that there will be a tremendous amount of models kicking around people’s basements and finding their way on to Ebay, Craigslist, etc. This means that if you’re willing to buy pre-owned, you can acquire an Eldar army (with perhaps some older miniatures) for less than you might expect. Tack on the fact that you will be able to have a good degree of interchangeability and custom modeling with other elf-like figures, and their accessibility becomes nearly unparalleled. Elf and space elf models available from virtually every miniatures company and a creative modeler will find ways to incorporate those minis or bits into their army if they are looking for cheaper or unique alternatives to the regular Games Workshop models. In addition, a new codex and newly released models means Eldar are all over the place in games stores and online, so finding miniatures for Eldar will be one of the easiest tasks around. 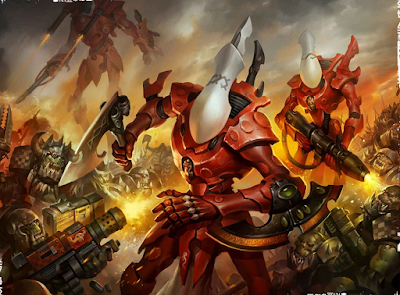 Are you thinking of starting a new army? Do the Craftworld Eldar appeal to you, or will you try something else? Let us know below in the comments.
By Unknown