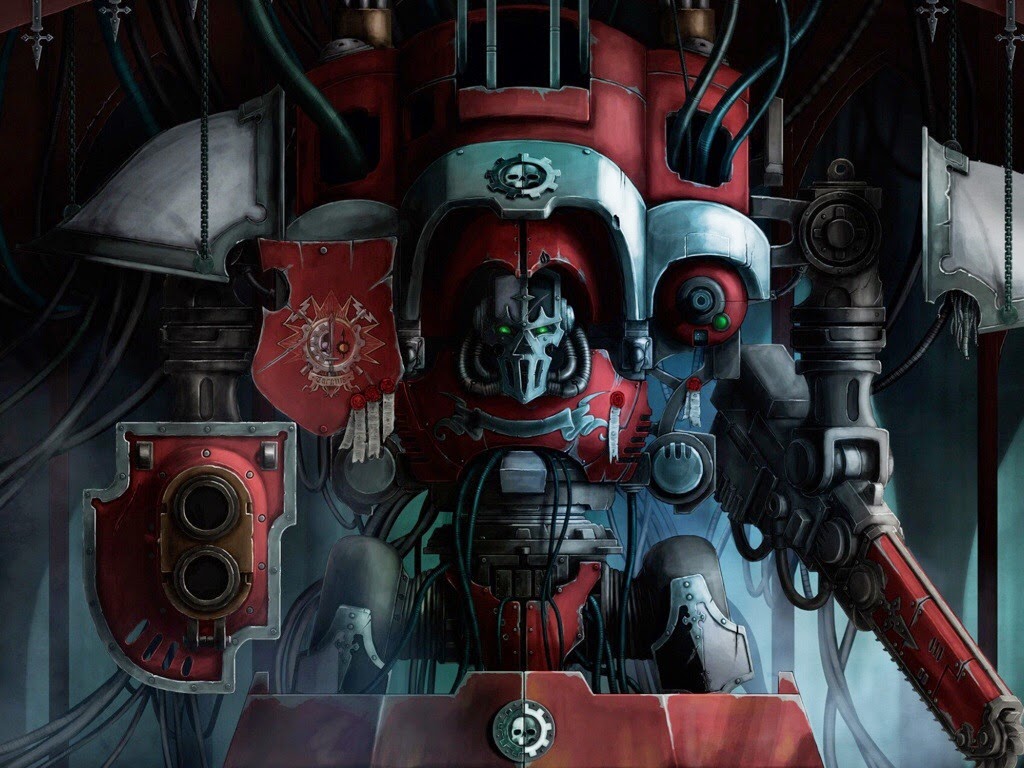 This week has seen a few rumors on Imperial Knights and Cult Mechanicus surface. Apologies for not keeping on top of news as it breaks - new job, new country. I'm still figuring out my routine.


honour through fealty - something big, this way comes^^ the Imperial Knights shall march soon again ;)

The hint from this weekends White Dwarf Paint Spatter

via Bird in the Trees on Bols


Both Knights in a combined combo kit.
Plastic kit will be released soon.
White Dwarf Rules for Warden & Crusader and later codex inclusion.
The new designs do not share the “turtle shell” carapace, and have a divergent appearance.
Both models share an up-armored, brutal appearance compared to the Paladin/Errant model.
Both share
Both new Knights share a Heavy Support position in an Imperial Knights army list.
Imperial Knights “Decurion” formation to be arriving with the new kits.

Crusader is armed with:
Warden is armed with:
Both models have an optional top carapace missile launcher weapon mount, with multishot S8, AP3 anti-flyer capability
Both models are protected by a single energy field based heavily on the rules for the Stronghold Assault book’s Void Shield Generator.

Both models cost more points than a Knight Paladin/Errant

via Atia on Bolter and Chainsword

New Combo Kit for Cult Mechanicus containing core unit the Electro-Priest.
One version features large double handed glaives similar to the old model from the 1990's and the other is armed with archaic looking wrist mounted shooting weapons. Both versions feature robed legs, and torsos with exposed fleshy chests that contain the bio-electrical details that they are known for.
Their heads are both bare, and some are blindfolded as well. The close combat versions are wreathed in cog plate, and the shooting variant (with the wrist mounted weapons) have yet more archaic equipment grafted into their backs and heads.
Both share the same robed legs which look similar to the zealots of olde, and are topped with a very American wrestling championship styled belt crowned with a large Mechanicus cog. Their bases are smaller than 40mm.


The Second combo kit for the new Mechanicus will feature tracked conveyor infantry models who resemble cybernetic terminators cut at the waist and attached to set of small triangle treads.
One unit type will be heavily armored, and decked out for close quarters engagements.
The second is less armored, and features two types of cannon; a plasma cannon varainat, and a larger calibre weapon.
They are on 50mm bases.


couople points for the cult mechanicus
-no knights or titans are in it. also no skitarii.
-tech priest dominus are the hq
they can restore a hull point or heal a point of damage
also they are nice model. a hunched over robed techpriest who is mostly mechanical. think of previous admech artwork. inspiring model with lots of detail


The HQ unit for the New Cult Mechanicus is called a Tech Priest Dominus. This is a larger character model that is similar to the Forge World Magos models, except it is done in plastic. He is similar yet different that a Magos, robed and slightly hunched over from the arcane mechanisms mounted on his back. There are two head options one is crowned with a strange almost papal hat and the other with the normal hooded mechanicus garb.
There are servo arms that stabilize the figure to the ground and do not have free motion. He walks with an immense staff that is a much larger and more ornate version of a Tech Prist’s weapon, and also sports a cane.
The model has multiple spidery legs concealed under his robe, and is on a 40mm base.


I was just told that there is a new Giant Robot for Cult Mechanicus in the Heavy Support slot.
You get 2 giant robots and one Datasmith as a squad. The robots stand twice the height=t of a space marine and are MCs. If I remember correctly you can add additional robots, it was 2 or 3. The Datasmith is a character that controls them.