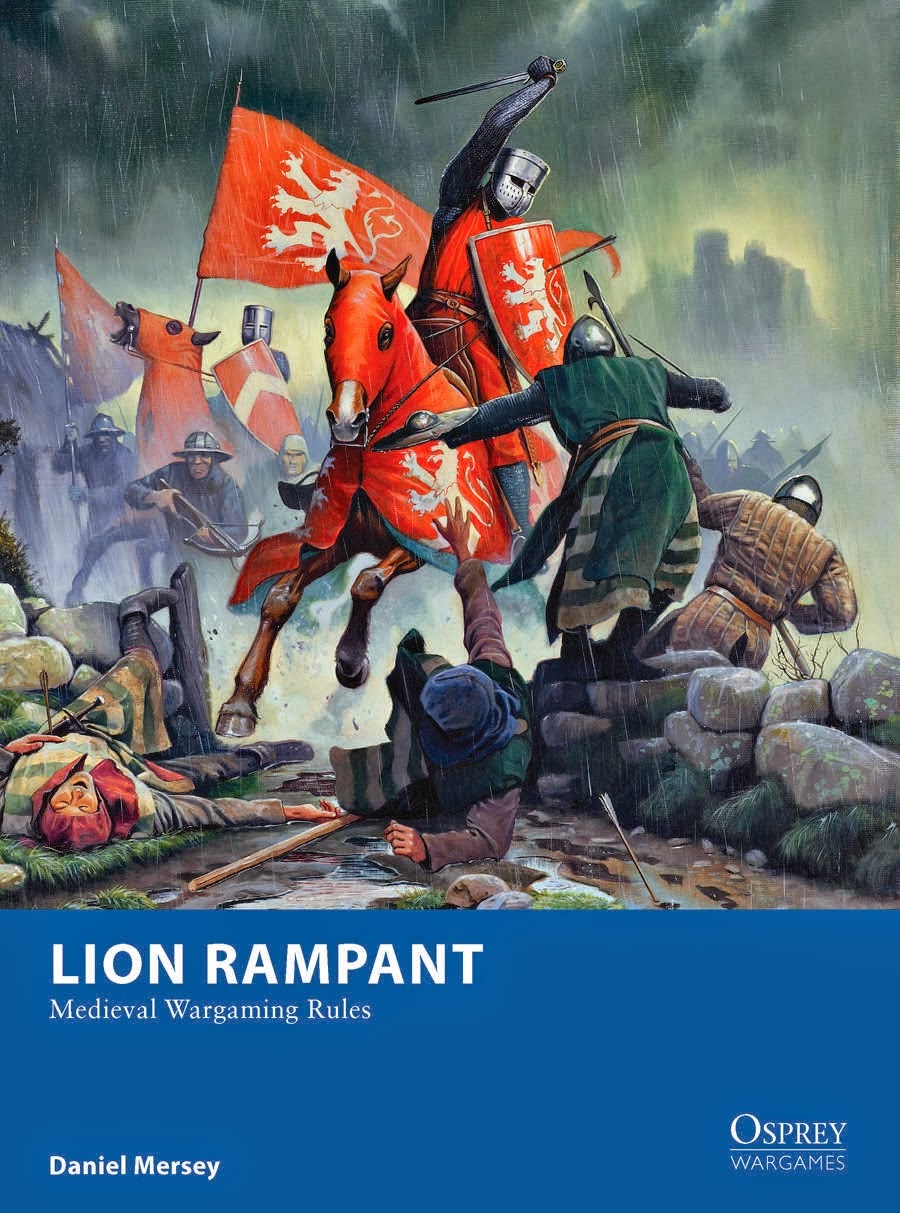 Osprey Publishing is a press known for small and detailed treatments of specific parts of military history. In general, their books are widely used by historical wargamers, but since 2012 they have also been producing wargame rules.  Lion Rampant, written by veteran game designer Daniel
Mersey, is their eighth offering in the series.

Like the other Osprey wargames, one very attractive thing about Lion Rampant is the price. Retailing for $17.95 for the rules, scenarios, and army lists, it is among the least expensive of the wargames currently available.  The game size is based around small units, so players might consider a full retinue (what you need to play one side of a game) to be from 24 to 60 infantry and cavalry models (in 25/28mm).

In addition, the book uses the huge range of interior artwork from Osprey’s historical titles, by artists such as Angus McBride and Mark Stacey.  This art is excellent and inspiring for the setting of the game, which is the high and late Middle Ages. For wargamers unfamiliar with this period, the models look very much like those from the Bretonnian army in Warhammer Fantasy Battles.

A first glance at the game might be a bit confusing, mainly because the rules work in some ways that many will find unfamiliar.  For example, the “unit profile” section lists a number of values for “Move,” “Attack,” “Shoot” and “Courage,” and it seems like these will work in similar ways to the profiles in Warhammer, Warmachine/Hordes, etc.  The core mechanic of the game is different here, though, and this is one of the strengths of Lion Rampant.  It takes a couple of turns to get used to the way it all works, but from then on the game plays quickly, with few special rules, very little record keeping, and game mechanics that create just the right feel for high- and late-medieval skirmishes.

When a player activates any given unit in this game, she will choose one action for the unit to attempt: charge forward into combat (“attack”), maneuver on the field without making contact with an enemy (“move”), or fire ranged weapons (“shoot”). There are no phases to the game turn, and each unit’s action is fully concluded before another unit is activated. Two things make this unit activation fun and interesting:

1) The controlling player must roll to activate a unit in order to do any of these actions, and the number needed to activate the unit depends on the type of unit and the action that is being attempted. A unit of archers, for example, will be easier to activate to shoot than it will be to charge and engage in melee, and a unit of knights, headstrong and eager, has a much easier time activating to attack than it does to carry out a maneuver (which the knights will find a waste of their time, presumably). Choosing what to ask each unit to do becomes a tactically rich part of the game turn, and it makes sense thematically with the game’s setting. 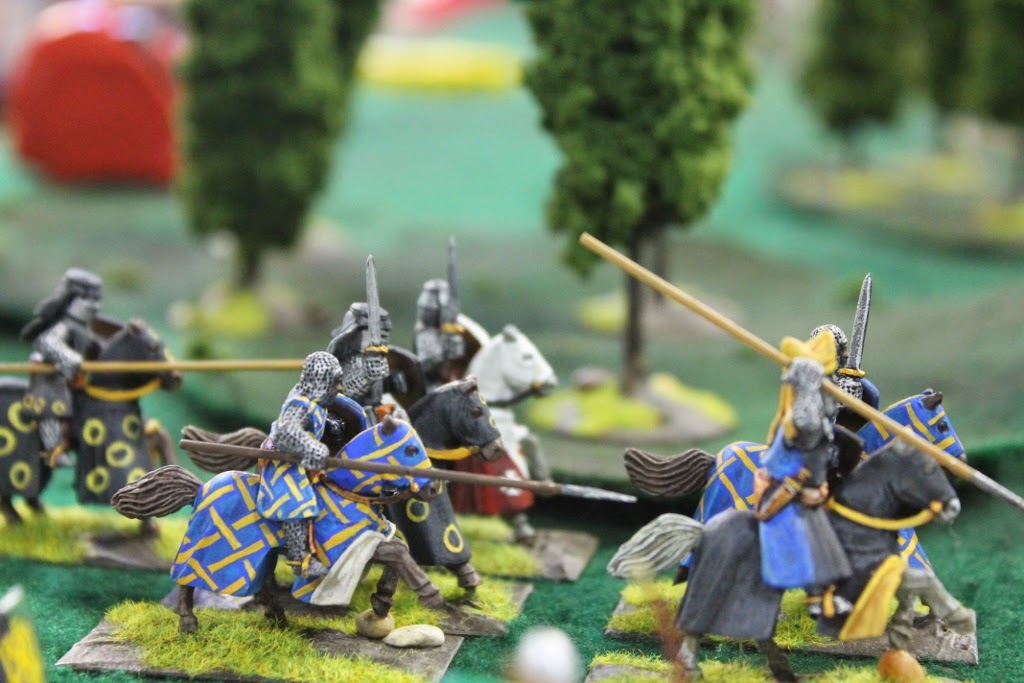 2) If a player ever fails to activate a unit, then his turn is over immediately, and the other player can start attempting to activate his units. This seems like it could be frustrating at first, but it keeps the game going at a nice speed, and the players feel as though they are constantly about to have a turn
again. Unlike some larger “I go, you go” games, where you can literally use the restroom, have a snack, and make a quick call while your opponent is moving his units, the game turn in Lion Rampant switches sides quickly, and both players tend to stay involved during each other’s turns.

In combat, the rules are generalized, quick, and easy. All units roll 12d6 to attack (or to shoot), and fighting is simultaneous. Each die is compared to a “to hit” number on the unit’s profile for either attacking or being attacked (some units are better at defending, some at attacking), and all of the hits are compared to the target’s armor to determine how many models are removed from each unit.

After removing models as casualties, Lion Rampant uses a simple morale system that yields satisfying results with a minimum of record keeping. “Courage” is used to resolve combats and to rally troops, but damaged units will have a more difficult time with this roll. Lightly-damaged units will usually pass their tests or (at worse) flee for one round, while heavily-damaged units will flee for longer (even off the board) or rout and be immediately removed from play. 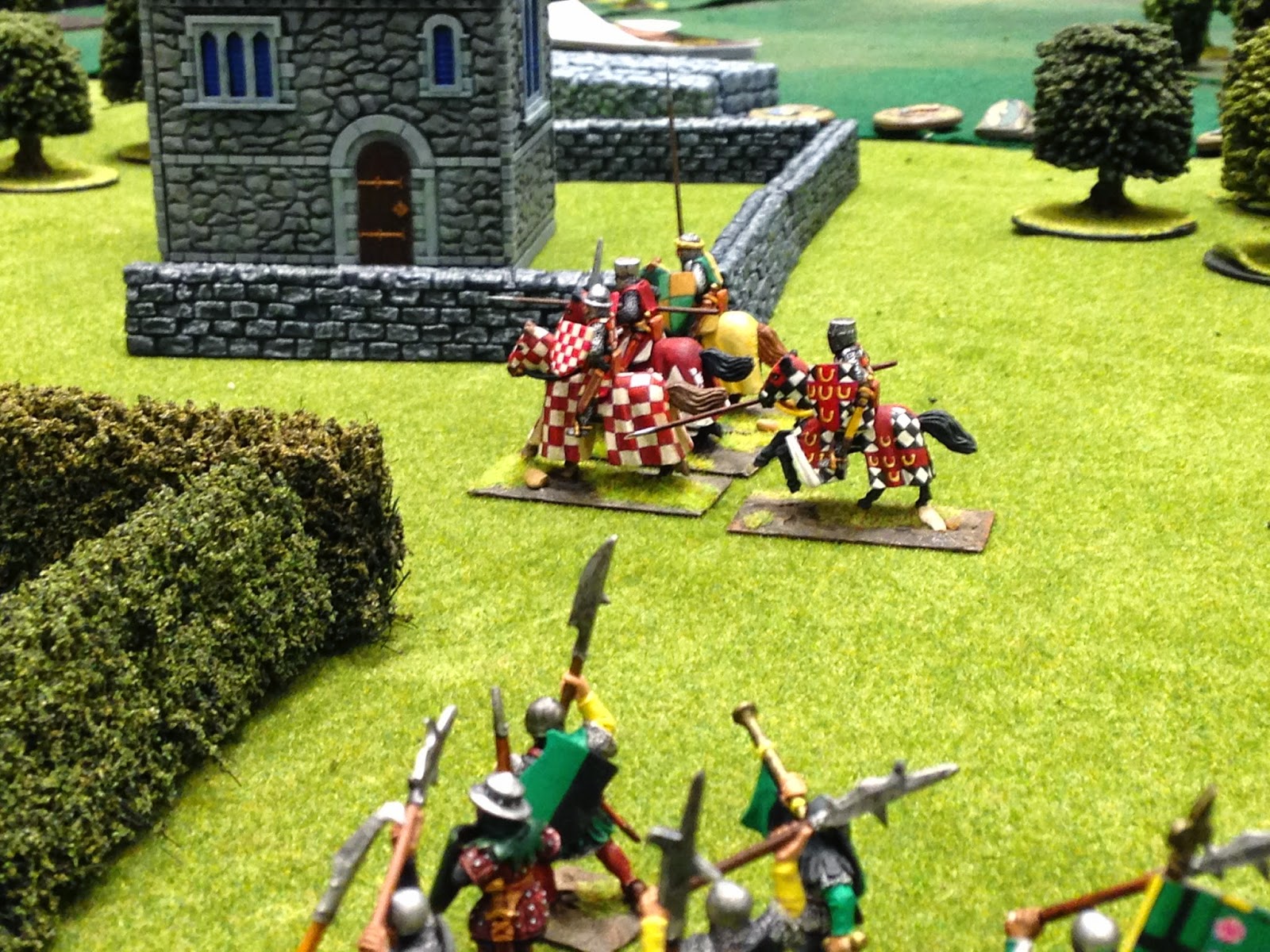 All in all, Lion Rampant is a game that allows for a satisfying level or complexity and detail with a simple and intuitive rules mechanic that is learned very quickly. Players in my club all remarked at
how fun the game was, but also how seldom they went looking for rules even though they were first-time players. The strength of the system is that it provides the feeling of a full miniatures battle, but with a much quicker game, fewer special rules, and a mechanic that is simpler, clearer, and more easily remembered than in other miniature wargame rules.

The period in which this game is set is one of the most visually exciting, and the game definitely looks best with lots of miniatures painted with lively heraldry and shining armor. The author also makes it very clear that he is presenting a “medieval themed” game rather than any kind of historical military simulation. As someone who knows a little bit about the period, I appreciate this approach. As the author says, “games about knights should be fun,” and I am happy taking Lion Rampant as a game of light enjoyment, more like a medieval movie than a recreation of an actual historical engagement. 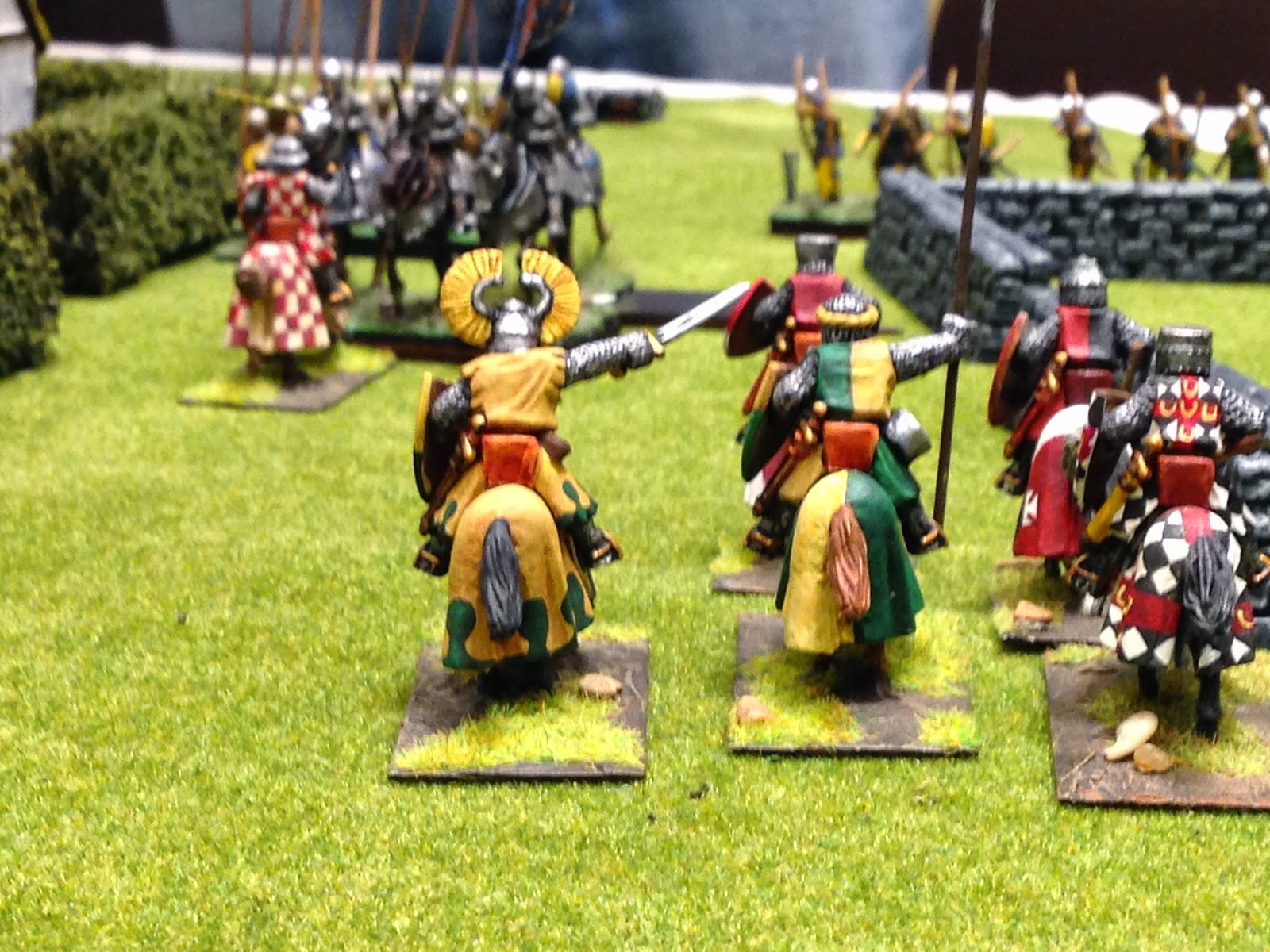 The history represented by the game is generally of the type popular among wargamers and enthusiasts, and so knights are stereotypical in their abilities and behaviors (they don’t like being told to maneuver, and they will charge when able, regardless of what their commander may want),
peasants are worthless but cheap, crossbowmen fire slower and hit harder than archers, etc. I sometimes find these depictions of medieval people to be overly reductive and simplistic, but Lion Rampant is very clear about being a game where the players enjoy these stereotypes, and the options in the army lists do provide interesting and simple ways to modify units so that they work in different, more nuanced ways.

Lion Rampant is a fast and entirely enjoyable game that manages to be true to the theme and feel of its setting. While I would put this game in the “Beer and Pretzels” category of wargames (where quickness of play, enjoyment, and generalized mechanics are the preference), the game provides a play experience similar to the larger ancients and medieval rules currently available (Hail Caesar, Clash of Empires, War and Conquest, etc.).

The historical element of the game is light and fun, but the rules do encourage play according to some commonly-accepted notions of medieval warfare. All in all, I give this game a very strong recommendation, and I would encourage anyone who likes the idea of medieval knights (or who has been waiting years to play Bretonnia!) to give it a try.

By Ilan Mitchell-Smith
By Unknown