Lords of War -A card game for wargamers?

We wargamers love our miniatures and all the work we put into them, just to field a decent looking army 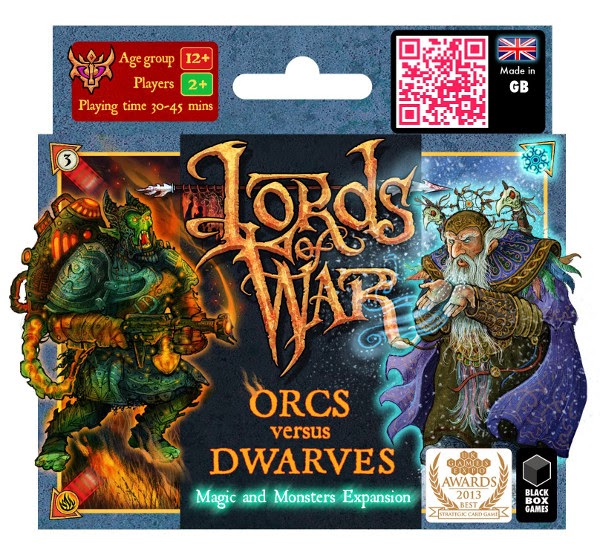 After we have spent countless hours painting and preparing the miniatures, most of us use a big and bloated(and very fun, don’t get me wrong), game-system like Warhammer 40k or Fantasy battles, which delivers great cinematic battles but require quite some time to play and set up, but as I have gotten older and picked up a wife and some kids along the way, time just isn’t what it used to be.

Having family responsibilities, work and the occasional need for sleep, smaller and faster games, which can be played during the workweek, have been increasingly enticing to me. The games might not even include miniatures or terrain, but if they capture that "wargame feel" I am all in. Well, say hello to Lords of War, a card game for wargamers.

As you might suspect, I love smaller games that play fast, with minimal setup and accessible, streamlined rules.
Lords of war is all that, and it is pretty cheap to get into, even if you got kids who want to eat every now and then.
Some might be turned off by the fact that it is a card game first, wargame second, but if you give it a chance, I am sure you will find that there is loads of deep tactical fun to be had.


LoW is a two-player game in which each player controls one of six factions, Undead, Templars, Lizard men, Elves, Dwarves or Orcs and battle for domination(and bragging rights) on a grid based playmat. All provided in a small and handy box..
Each unit has a shield value and attack arrows pointing in different directions. The goal is to eliminate 20 enemy units, or 4 commanders(more on that later) and you do this by placing your units in such a way that the attack arrows point towards the enemy unit, preferably without hurting your unit back.
Let’s look at some images

This might sound deceptively simple and it is, but it is one of those “easy to learn, hard to master” things. Every army is lead by a general, which a very decent unit who can take and give a beating, the thing is though, if your enemy kills him, he get’s an extra turn, which could lose you the game.
Most units are stationary, but a select few can move, which really brings some unique tactical choices.


Of course, there is a bit more to it than that, different unit types behave differently, cavalry is more flexible and berserkers berserk, but even when throwing in all the special rules(of which there are not very many), the game manages to remain simple to understand, learn and teach.

As you might have guessed, I am pretty stoked about the game. It plays in about 30 minutes, so  I can get a game in without using an entire evening. The core rules are easy to teach, so I can play both my 9 year son and my wife and not be dependent on the local gaming group.

The game supports army building and  if you like you can make a custom deck, based on a few restrictions. I like the stock decks though, as they are very well balanced and provides matches that are won through good play rather than good list-building.

Each pack contain two decks, Orcs vs Dwarves etc, but the decks can be used interchangeably with no problems and you can pit dwarves against undead without any problems.


The game is priced at 12.99£(worldwide shipping included), which gets you two decks, a playmat, rules and many hours of fun.

EDIT:
The guys behind Lords of War just went to kickstarter with the Latest expansion.