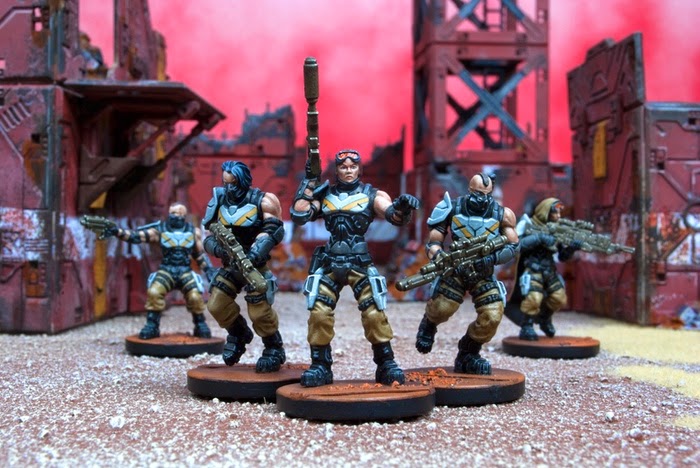 Mantic Games is back once again with another Kickstarter project. This time they are hoping to fund an expansion to their Sci-Fi Skirmish game. Deadzone.

We caught up with Luke Watson, community manager at Mantic Games to discuss what the new Kickstarter is about and to get some more information of the new miniatures being released.

Q. First of all thank you for talking with us about your Deadzone Infestation. For those who are unfamiliar with Deadzone could you give us an overview as to what the game is about and how this new Kickstarter will expand it?

A. Deadzone is a fast paced sci-fi skirmish game that throws you into a dark future where an alien virus has been unleashed, and an entire system is quarantined from the rest of the galaxy. Those trapped inside are forced to fight for their survival, or mercenaries plunder the planet for the remaining resources. The new Kickstarter brings a new revised core rulebook, a great new campaign system and an awesome new faction, the Veer-myn.


Q. While the Veer-Myn are already established in the Warpath Universe this is their first appearance in Deadzone. What can you tell us about them?

A. The Veer-myn are an insidious disease ridden race. They heavily resemble rodents in physiology (hence the name) and have always being a dormant threat throughout the universe, but due to the conditions on Exham IV, have been forced to awaken and flee the planet. If allowed to do so they will inhabit other worlds and could end up infecting an entire star system! On the tabletop the Veer-myn are as close to a horde army as a skirmish game can get. They use their strength in numbers to overpower the enemy and have an array of chemical weaponry to kill their opponent.

Q. So is it just the Veer-Myn who are getting some new miniatures or will the existing Deadzone factions be getting reinforcements?

A. We currently have miniatures up on the Kickstarter for Enforcers and Plague as well as the Veer-myn. The Enforcers get the Pathfinders and Jetbikes and the Plague have the incredible Plague Aberration. As for the other factions, the more support we get on the Kickstarter the more stretch goals we can unlock, so it’s totally up to the backers to unlock any more support for existing factions!


Q. Along with your hard plastic Enforcers, Peacekeepers and Forge Guard it seems that you are certainly moving in favor of multi-part kits over your current sprueless plastic miniatures. Is this a trend you a likely to continue across Deadzone and if so, will we see hard-plastic plague?

A. We understand how much everyone is loving the new hard plastic miniatures! The plan is to release as many new kits in hard plastic as possible as it’s a fantastic material to work with as a hobbyist and captures all the sculpted detail brilliantly. As for hard plastic plague, they are definitely on our list of things to do at some point!


Q. In addition to these new miniatures how will Deadzone: Infestation Kickstarter effect the current rules for Deadzone?

A. Deadzone Infestation brings with it a new core rulebook. One thing we want to make clear is that the rules and mechanics are not changing. We have a great game already with Deadzone, it just needs streamlining, revising and laying out in a more user friendly manner. We'll make tweaks to the existing rules so that they are more fun, but the main changes will be to the stats and missions so that they are balanced.

Q. You achieved you funding goal with ease and you are currently scorching past your stretch goals. What other goodies can we expect to see and, most importantly, will there be cameo from Mr Renton?

A. That would give away the surprise! But expect to some awesome additions to existing factions. Usually we blast through our stretch goals that quickly that we end up sitting round the PC worrying that we are going to run out of awesome ideas, but we don’t ;) Mr Renton is unlikely to make an appearance however…

Q. So when is the final date for the Kickstarter and when can backers expect to get their hands of Deadzone: Infestation?

A. The final date for the Kickstarter is the 6th April. People should expect to get their hands on Deadzone Infestation in 2016


Q. Finally, what is it that you are most looking forward to in Deadzone: Infestation.

A. Blaine on Jetbike – so badass!


To pledge you support or to find out more about the Deadzone: Infestation head over to Kickstarter Page