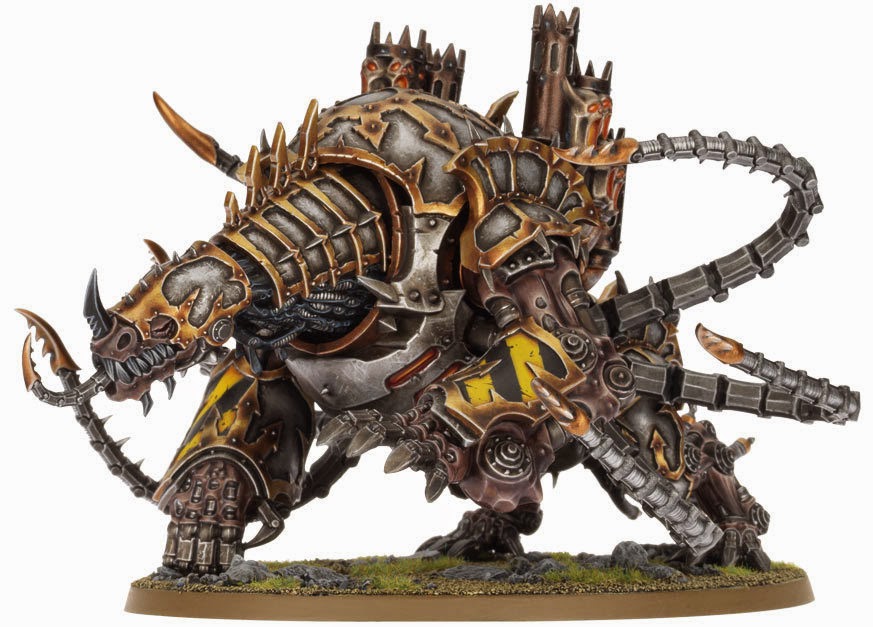 Daemon Engines: metal constructs housing some of the most dangerous and vicious Daemonic spirits of the warp, often against their will. Ranging from simple possessed vehicles to machine-daemon hybrids, they constantly threatening the barriers between real-space and the Warp, Daemon engines are a growing threat for the armies of the Imperium, be they the vanguard units of the Chaos Space Marines, the terrifying support units of the Daemonic hordes or the god-like Daemon Titans of the fallen Titan Legions. With so many terrifying monstrosities to list, here are ten of the best known and effective engines (in no particular order, that is for you to decide).

The original Daemon engine for Codex: Chaos Space Marines, the Defiler, whilst overlooked in this day and age, still has a lot to offer. This walker was commissioned by Abbadon the Despoiler, and is a six-legged multi-armed mix between close combat monster and artillery.

With plenty of combat potential, a wide range of weapon options, and a battle cannon for a chest, this Daemon Engine is fairly capable either from afar or up close and personal. 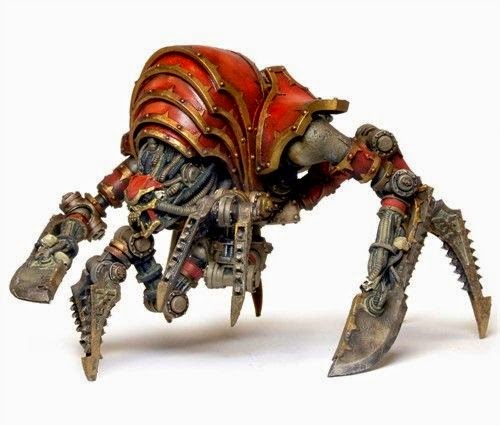 With vicious bladed arms and an even more vicious occupant, this deciated engine of Khorne is a terrifying and fast close-combat machine able to rip up anything in its part. It's multiple small legs propel it across the battlefield with ease, and its huge bladed forearm weapons are more than a match for any Deadnought-class weapon and just as deadly. Often striking in packs of up to three, these smaller daemon engines can easily take on a larger foe. Some are eqipped with the harpoon-like Impaler, which not only causes massive damage, but should the target survive, will drag them closer the the Blood Slaughterer pack, bring it close for the killing blow.Whilst many were encountered during the siege of Vraks, many have found themselves supporting the many warhosts of Khorne and the Despoiler.

Taking command of the skies, the Heldrake terrifies both ground and air units with its weapons and abilities. This nimble dragon-like engine soars through the skies, either scorching troops with its Baleflamer, or ripping apart armour and flyers with a Hades Autocannon. It's forearms bear slarp claws, more then capable of tearing wings from enemy aircraft, the Heldrake taking sadistic glee as the panicking crews fall from the heavens. It may not be the fastest Chaos aircraft, but it is one of the most destructive. 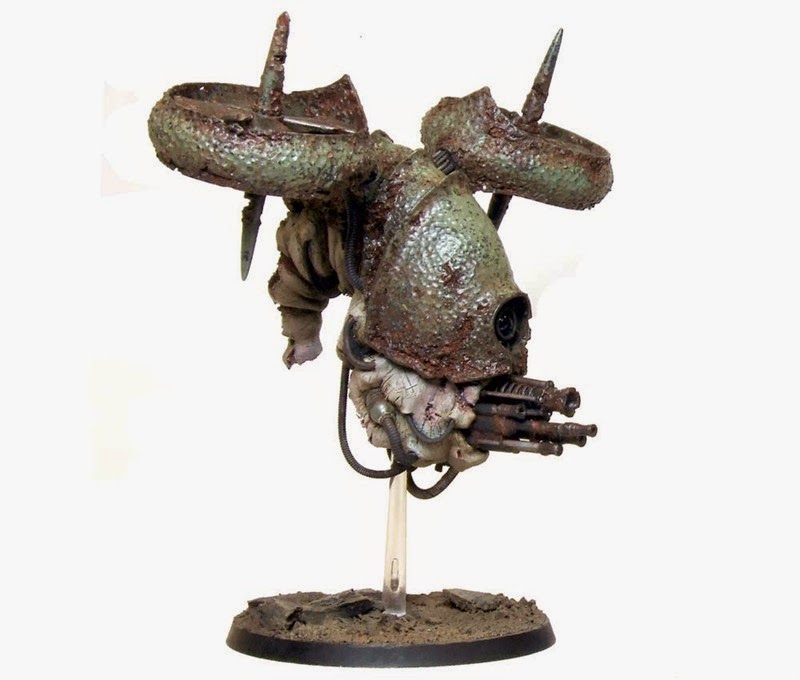 Taking flight on smoke-benching rotors and spewing decay, these flying daemon engines of the plague god Nurgle are rightly feared. Even when they are not in combat, some have observed them feeding on the dead, likely to reload their horrific plague cannons.

With an appearance closer to daemon than machine, they are lightly armoured yet resilient, befitting a machine of Nurgle. Even a single engine or a small squad will terrorise the battlefield and dominate the skies, which turn black from the swarms of plague-flies and other disease-spreaders. 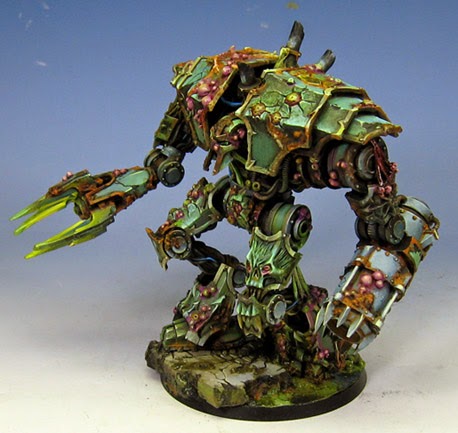 The Daemon Engine that just wont die. Should an opponent take this construct down, chances are it will stand up minutes later, all evidence of damage erased. Born of a mix of machine, daemon and xenos, Decimators are superb hunters, capable of taking down larger targets, or killing more cowardly foes in buildings, tearing them out like a fisherman gutting a fish. No building or transport is safe from the Decimators talons, and very few survive the intense heat from the claw-mounted flamers that activate once a breach is made. 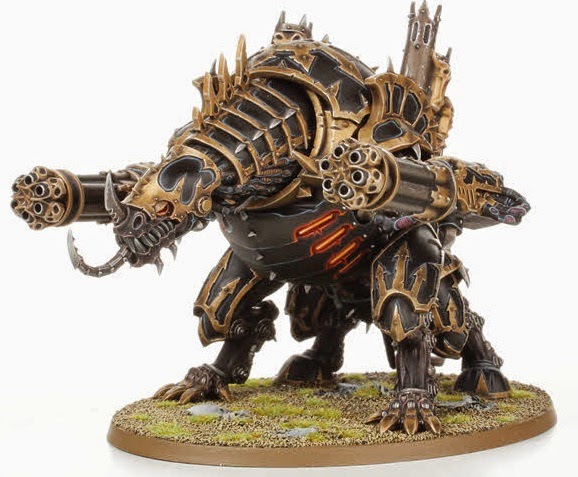 One of the "new-breed" daemon engine, this centaur-like daemon engine is totally focuses on laying down a punishing bulletstorm, filling the air with daemonic shells or gouts of super-heated plasma. Whilst limited to short-range engagements, the Forgefiend is very effective against light to medium armour when fielding Hades Autocannons, and especially effective against tough armoured units like Terminators or Meganobs when armed with three Ectoplasma Cannons. It's ability to self-repair is also a valued asset. 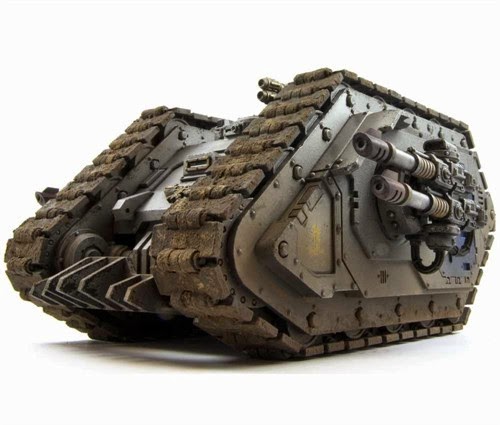 Whilst not stictly Daemon engines, many examples of this ancient design are home to cruel machine spirits which are now something horrifically different, and as terrifying and any other daemon engine. These rare Land Raider variants were at the forefront of the Great Crusade, fighting unspeakable horrors and encountering hostile foes. Over time, thier complex Augury Webs and machine spirits became haunted and perhaps tainted by the now-forgotten xenos races. So many terrifying truths were revealed on their travels, and once the Horus Heresy errupted, daemonic corruption was piled on top of daemonic influence.

These Proteus tanks are now macabre machines, machine spirits now an unholy fusion of machine, daemon and xenos. Augury webs, once designed to scan the universe, now broastcast the truths of the universe, proclaiming the horrible futility of life itself. These ideas bring armies to thier kness, with untis realising the pointlessness of their lives. Not even allies are immune from the Proteus' knowledge, and these tanks are rightly feared by friend as well as foe.

Possibly the most infamous named daemon Engine, Dies Irae was the engine that broke Terra's palace open. This Imperator Titan, the largest class of titan ever made, was the first machine to break down the rockcrete and adamantium walls of the Imperial Palace, allowing the uncountable hordes of traitor Space Marines, humans, mutants and worse to storm the hallowed halls.

An Imperator titan is a dangerous foe even without the additional blessings of the Warp. Armed to the teeth with some of the largest weapons ever created for land-going warmachines, an Imperator could very easily bring down entire hives by itself. With a malicious daemonic infience, Dies Irae is even more deadly and sinister, emmiting foul energies and surviving wounds which would fell lesser machines. Its infamous history of bloodshed during the Horus Heresy and since placed it on the loyalist Titan Legions' "most wanted", and often titan Princeps were overcome with rage and a desire to slay this god amongst daemons; most of which were overcome in battle by the daemon titan's immense firepower.