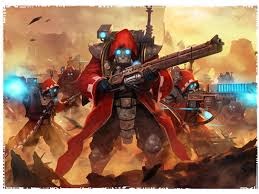 Codex: Skitarii has been about twenty years overdue. Knowing this, Games Workshop pulled out the stops to deliver on this one. This book truly adds something to the mythos of 40k in a way that few have before—the Mechanicus has always been a strong part of the lore, but beyond “they’re these machine-worshipping people from Mars” we haven’t had a much better look into who they are and how they operate. Skitarii gives us that insight. We see the military structure of Mars, and know exactly what a Skitarii is beyond this generally vague footsoldier of Mars.


So what’s in the book? Beyond the great first steps into the background of the Adeptus Mechancius’ war machine, we’ve got a new detachment not unlike the Harlequin one. It lacks HQ slots, but has many more other slots to compensate. The detachment provides the Scout (minus the option to Outflank) and Crusader rules to the entire army. Pretty solid.

On the unit front, we’ve got the two kinds of infantry—the Rangers, who are a light infantry option that are Relentless and have a 30’’ rapid fire weapon that’s AP4 and gives Precision Shots, and the Vanguard, who are a little more specialized and provide some nasty debuffs for opponents in close combat and excel at crowd control at range.

Then, we’ve got two special infantry units that are on 40mm bases—the Sicarians. They’re much more cybernetic than their regular Ranger/Vanguard counterparts. Both are close combat specialists that move faster than regular infantry models—the Ruststalkers wield AP2 close combat weapons, but for them to do their job, they have to be able to get into protracted combats, since their weapons take a round to become AP2 instead of just rending. The Infiltrators carry power weapons and have the option for some high-volume, low-strength shooting to supplement a slightly weaker close combat ability compared to the Ruststalkers. I personally really like the Flechette Blasters—they’re 5-shot, S2 assault weapons with Shred. Yeah, it needs sixes to wound Space Marines, but it’s a great crowd control bullet hose weapon.

There are two walkers, and they’re arguably the best units in the book. The Sydonian Dragoon has the ability to generate a whole bunch of S8 attacks in close combat when it charges, and can double out a lot of death stars that rely on feel no pain in a 45 point package. The Ballistarii have grossly accurate lascannons or autocannons, and on an inexpensive platform that’s quite nimble, can get around to the side or rear of vehicles very easily. With the Precision Shots rule, they’re able to snipe heavy weapons troopers and sergeants, while they’re at it. They also snap fire at BS2, so they’re actually not awful at air defense either since the cognis lascannon is twin-linked.


The Onager Dunecrawler is the last unit, which excels in a squadron but is still capable on its own. They can be equipped with several different grossly powerful weapons—the Neutron Blaster, Eradication Beamer, or the Icarus Array. The Icarus Array will probably be heavily played—it puts a ton of shots from three different weapons with skyfire, and its cognis autocannon is able to use interceptor and still shoot normally in the next turn. The neutron laser is a S10 small blast, so it’s great not only for tank hunting but for taking out groups of light vehicles. The eradication beamer is able to put out large blasts for infantry crowd control. Regardless of which option is chosen, the Onager is dangerous for its chosen role and is outrageously points efficient. When brought in squadrons, each model increases the unit’s invulnerable save from their shield generators by one, so a full unit of 3 has a 4+ invulnerable save. Not bad at all.

Then, we’ve got the formations. They’re pretty standard fare—the Battle Maniple is the company-level formation that provides a leadership buff for models within 12’’ of an Onager. Then, there’s the War Cohort, which is three Battle Maniples. They gain the ability to re-use Doctrina Imperatives. The Sicarian Killclade is three units of Ruststalkers and one unit of Infiltrators, and give all the units the ability to charge after running once per game. Considering how dangerous these close combat troops are, that’s one to watch out for. The Ironstrider Cavaliers formation gives the ability to re-roll failed to-wound rolls against a nominated character, and lets models in the unit shoot through one another and draw line of sight through one another without conferring a cover save to their targets.

The Skitarii have a couple great army special rules. The first is the Doctrina Imperatives rule, which is a set of six orders you can issue the army as a whole once per game each. Half of them increase their ranged abilities, while the other half increase their close combat potential. You choose one to use at the start of your movement phase. You don’t have to use a Doctrina Imperative but there’s no reason not to. Then, there’s the Dunestrider rule. The Ruststalkers and Infiltrators have this ability. They add 3’’ to their maximum move distance in the movement phase, when they Run, and when they charge. Not bad!

Let’s talk guns. Arc weapons are commonplace in the army, are S6, and have the Haywire rule. Watch out for those! Having problems with enemy superheavy units? Rangers with two Arc Rifles per squad will carve them up in a hurry.

Galvanic Rifles are the stock weapon for the Rangers. They’re Pulse Rifles with the Precision Shots rule and AP4. Fire Warriors are about to have a really bad day.

Phosphor weapons are rare, but powerful. They’re S5 AP4 weapons that have the Luminagen rule—a unit hit by one of these reduces their cover save by 1, and units can re-roll their charge range against affected units. It’s not Phosphex from the Horus Heresy, but it’s got a lot of utility.
Then there’s the Plasma Caliver. It’s a tough choice between passing these out and Arc Rifles. An assault 3, 18’’ plasma gun is a really hard thing to say no to. Yes, you’re going to blow your hands off shooting that thing regularly. But, your average infantry model in this army is 9 or 11 points, depending on which unit you build.

Radium weapons are the signature of the Vanguard squads. They’re lasguns but have the same functional rule as Tesla weapons—they inflict extra wounds on to-hit rolls of 6. The Radium Carbine, which is the stock Vanguard weapon, is an assault 3, 18’’ S3 AP5 weapon. And they look like classic campy sci-fi laser blasters. So what’s not to like?

The Transauranic Arquebus is the other special weapon available. It’s an AP3 Armourbane sniper weapon with a 60’’ range. Pretty cool.

Arc Mauls are a thing—watch out for those. It’s a power maul with Haywire. Also watch out for taser weapons. Yeah, I know, tasers are supposed to be “less lethal” weapons in real life, but the Mechanicus has brought some really mean cattle prods to the fight. Taser goads are S+2 and on to-hit rolls of 6 get two free additional hits.  And we’ve got Transonic weapons, which are +1S AP5 to start with the function of rending against non-vehicle models, but after one round of combat, their attacks all become AP2.

The relics are suitably silly. Arkhan’s Divinator lets you re-roll Mysterious Objectives or Mysterious Terrain rolls. If you play with those, it’s a good little item. The Omniscient Mask gives Zealot. Pater Radium is essentially Nurgle’s Rot—enemies in base contact take toughness tests or take D6 wounds with no armor saves. The Phase Taser is a +2S taser goad that removes models from play (not instant death—removed from the game) if they fail an initiative test. Phosphoenix is a phosphex pistol, as per the Horus Heresy. It’s a 6’’ S5 AP2 pistol with the Luminagen rule and on a hit, scores 3 hits instead of 1. It’s poisoned on a 3+ to boot, so this thing isn’t going to fail to wound. Lastly, and most notably, is the Skull of Elder Nikola. Once per game, you can use Nikola Tesla’s skull to hit all vehicles within XD6’’ (where X equals the turn number) with a single haywire hit.

I’m pretty pleased with this book. I like that they’ve adjusted their price point on it to $33. It’s an easy addition to any Imperial army, or a great thing to stand on its own. And the models don’t disappoint. This has been twenty years overdue, and Games Workshop definitely delivered on this one.

So, is this book for you? The short answer is yes. Regardless of whether you play the game as it was designed to be played, or you play it competitively in large organized tournaments, there’s something in there for you. There’s an answer for every single problem you could potentially run into in that book, and can shore up any weakness in any Imperial army with it. It’s also a great new modelling opportunity to create an army I think everyone’s really wanted for a long time—a full 1850-point army of Skitarii is going to look impressive on the table with all its clanking mechanical support and ranks of robed tech-magi infantry. It adds something truly new to the game, and that’s something we haven’t really had in a long time.
By The Son of Horus