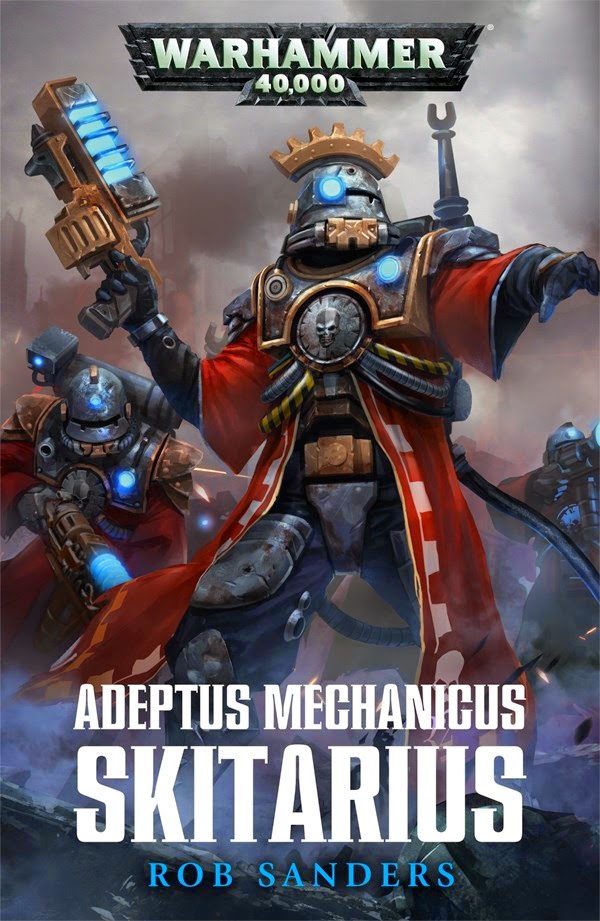 Lord of the Night reviews the Adeptus Mechanicus novel Skitarius by Rob Sanders.


"A well written novel that both tells an enjoyable and engaging story and makes the reader start planning their future Skitarii army before they are even done reading." - Lord of the Night @ Talk Wargaming


Skitarius, like it's namesake army, was quite a nice surprise from Games Workshop and Black Library. The Mechanicus have always been a side player in 40k, the enginseers and tech-priests that support the Imperium appear frequently in the books and often as main characters, but the Mechanicus as a faction only has a single trilogy devoted to it, and even that focused on the Mechanicus beyond it's borders and interacting with other. Skitarius is the first novel that really delves into the Martian Empire as it stands in 40k, focusing on it's cybernetically-enhanced soldiers, the Legiones Skitarii.

The Legiones Skitarii, soldiers of the Machine God and Mars, are the tireless enforcers of the Adeptus Mechanicus, enacting the Omnissiah's will across the galaxy, destroying the corrupted monster-engines of traitors and soulless xeno-tech that defy their god's will by their unholy existence. But even more important is the Quest for Knowledge, the holy charge to recover the lost knowledge of the Dark Age of Technology. When an ancient piece of technology is recovered by his lord, Alpha Primus Haldron-44 Stroika of the Skitarius is sent into battle on a Forge World lost to the heresy of the Dark Mechanicum for thousands of years, but when the battle turns against them and his overseers are lost, Stroika must fight without the guidance of the Machine-God on a world of heretics and daemons and fallen angels.

The story in Skitarius was very enjoyable, with quite a few twists that really changed the scale of the story. One interesting part of the story was the book's focus on the Skitarii Legions and how they operate, but also what their standing is in the Mechanicus, their relationship to the tech-priests that command them, to the Machine God and exactly how cybernetically augmented these soldiers are, and how that changes who they are as people. We also get a nice glimpse of the split between tech-priests who roam in space and those attached to a Forge World, the former being trailblazing pioneers with a fierce independent streak, the latter being scheming politicians for whom their own advancement is just as important as their God's will. As the battle for Velchanos Magna gets underway the story begins to shift as the truth behind several events is revealed, rather nicely as well with both immediate consequences for the characters and potential consequences that will likely have to be explored in the sequel. The key purpose of this story is to explore the Skitarii as an army, which it quite well, but that doesn't mean that it couldn't be enjoyed as more than product-placement, which while the novel does do, it has to, it is not at all blatant and never so distracting that it made me cringe.

The characters are... well the Skitarii are a tricky prospect in my opinion. They are meant to be largely emotionless, which rarely makes for a compelling protagonist, especially when practically every other character is similarly emotionless. But injecting them with emotion that they hide away would defeat the character of them as a faction, they are emotionless for the most part and that is how they should be portrayed, which the novel does, but that means it's hard to particularly like them. But that "for the most part" is where the work is really done, each Skitarii character does have a personality and each character can be defined by a single trait in my opinion. Magos Torquora is independence, Magos Mymidex is ambition, Nalode-Deka-871 is brutality, while Haldron-44 Stroika is Faith. These aspects show through quite clearly as each character's defining trait is what drives them through the story and what makes them perform the actions that send the story to it's conclusion (in this novel at least). The enemy are not explored as much, only two characters for the Dark Mechanicum and Chaos Space Marines actually appear, and the one example of former lasts for a few pages before dying, which I felt was a flaw that made the novel feel unbalanced towards the Skitarii, just a few sections from the POV of the Chaos Marine leader or a more fleshed-out Dark Mechanicum character would have made the character base more rounded, and the latter would shown the contrast between the Mechanicus and their dark counterpart in more detail.

The action scenes are very good, all the newly released units for the Skitarii are on full display. Vanguard squadrons with their devastating radiation weaponry, Rangers with their micron-precise galvanic weaponry, the perpetual-motion Sydonian Dragoons and their Ballistarius counterparts, and the especially cool Onager Dunewalkers (I'm a sucker for tanks that have spider-like legs). Again, while the purpose of the book is to sell Skitarii figures, the book is not blatant about it and the action scenes read quite well, the Skitarii methods of warfare are shown in very sharp detail with both their strengths and weaknesses clear to the reader, while the role of the tech-priests in war is also explored a little. The Dark Mechanicum were better explored in battle than they were as characters, their forces featuring hellish daemon-engines and cyber-monstrosities, suicider tech-thralls and corrupted magi with all sorts of bizzare titles and even crazier technology grafted into their bodies and flesh into their machines. The Chaos Space Marines however only appeared in a few of the fight scenes later in the novel, and really only one actually depicted the Skitarii fighting against the CSMs and how their advanced technology yet their weaker human forms would match up against the genhanced superiority of the Astartes, which was a bit of a disappointment, I wanted to see Defilers fighting Dunewalkers and how the weaponry of the Skitarii would work against different kinds of Chaos Marines. But despite the somewhat narrowness of the scenes, the battles were still quite enjoyable and I felt depicted the Skitarii quite well from both a selling stand-point and a novel stand-point.

The pacing of the book was done well enough, at 223 pages this is one of the new shorter novels that Black Library has started publishing, in the same vein as Kharn: Eater of Worlds by Anthony Reynolds. Because of that the novel does feel a bit quick, but considering the events of the story and how it goes, that works. One or two scenes could have used expanding a bit, perhaps some events in the story should have actually been shown directly rather than being seen through Stroika's limited perspective, but other then that the book reads well enough and I was never bored by it. The artwork is nicely drawn, an image of Ruststalker Princeps Nalode-Deka-871, a layout showing the various weapons of the Skitarii, and a diagram of a Ranger with points of note explained; sadly since this artwork is all available in the Skitarii codex it feels like a letdown that not one piece of it is unique as the other First Edition novels have featured.

My favourite quote, this line from Stroika combined with what he was actually doing then was the novel's most badass scene;

"Back, abomination! Back I say - back to the accursed dimension from which you came!"

The ending was surprising, a few BL novels have endings similar to this one, but even then they are a minority. The ending also served to make very very clear to the reader a part of the nature of the Mechanicus and it's tech-priests, and exactly how they view the Skitarii and other military arms that serve them. Sanders finishes the events of the novel but also makes it very clear that the story is far from over, the sequel hook is obvious and considering the final few events, quite welcome in my opinion. The final few pages of the novel do a very good job of revealing the real reason everything in this novel happened and why it happened the way that it did, these events turn the novel from a single-entry story about Skitarii fighting on a corrupted Forge World into a full on campaign by the Mechanicus against their dark cousins and the third party that has it's own agenda to achieve in this war.

For an enjoyable story that took some unexpected turns, characters that felt true to the spirit of the Skitarii and action scenes that were exciting while selling product, I give Skitarius a score of 7.6/10. This is a novel that fans of the Mechanicus should be able to enjoy, though it does not have the politicking and scheming among characters that previous Mechanicus works have shown, rather focusing on the crusader aspect of the Mechanicus and it's armed forces. It would also be a good introduction to the Mechanicus for anyone whose read 40k and wants to know more about the tech-priests, or for anyone who is curious about the new Skitarii figures and wants to read more about them than just a website blurb. But if the Mechanicus is something you aren't interested in, or you want complex emotion-filled characters that have multi-layered and intricate personalities, you won't find that here.