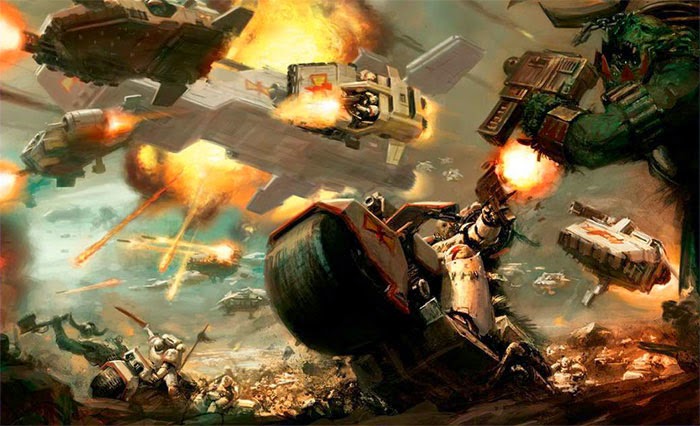 Greetings and welcome to my first article here at Talk Wargaming everybody.

Firstly, a brief history of me; I'm an inveterate gamer of all genres. Whether it's video, board and table-top or cards I'm there.
Secondly, I've been away from the Grim dark for a while, missing the whole of 6th, and at this point I think that's a positive.

Of the more experienced Warhammer-ers around me, everything after 5th is universally reviled, and I can see why. GeeDubs insistence on forgetting its gaming background to focus on delivering models en-masse is taking it away from the core of what made it attractive in the first place; a gaming company that wanted to be the best gaming company it could be. Iterating game systems to fix bugs or give players what they wanted was at the heart of everything, and recently those iterations have seemed cynical and single minded.  The business minded folk in my gaming circle have suggested this is the end game, to push share prices through the roof before a massive sale to the likes of Hasbro by giving players everything they want and not what the game needs to survive.

Fantasy Flight on the other hand, are taking what GW have done well in recent years and running with it. Arguably the most well received of the GW products in recent memory, Space Hulk, was a premium short run set of an exceptional game, originally penned in the good old Jervis centric years of the Workshop.  FF products mirror this in all the good ways. Net Runner is a wonderful box, beautifully designed and full of depth right out of the box. X-Wing, in all its glory goes further, supplying beautifully detailed models on top of a sleek and elegant game system. The point is, if GW don't resolve their short short-sightedness soon, there are others waiting to step into the top spot, who will service the gamers better.

But what of the positives? Why am I glad to be back now? Well, because I am a player, and I want those models. also, despite the system itself falling back on over-complication to fit in all the glorious new models, with supplements, additional rules and more focus on individual load-outs rather than squad effectiveness, the game designers have squeezed in some good, wholesome amendments.

Rotating objectives, Maelstrom style, have turned it all around. I'm several games in to 7th now, and as a game its so much more open and functional than it used to be. Gone are the scenarios with little or no tactical relevance, essentially two players running down the turns and seeing who has the best Turn 5 rush. Now there is a reason to get out there and explore the board, army lists have changed shape considerably and the focus on Objective Secured units is a welcome restriction that I believe balances out the almost optional FOC we now have.

Speaking of which, balance seems to be an issue that a lot of people are up in arms about right now. There have always been cries of "Unbalanced!", and there always will be, but an article I read recently hit the nail on the head; there are plenty of options for fun and competitive pick-up games. Not everyone has all the models for a tourney army all the time, and some people just want to have fun. And so what if there are basically 3 armies that are tournament competitive right now? If you want to compete, then compete, if you want fluff, there's always local games.

I think what I'm saying here is that I don't need 6th as it seemed like a stepping stone to where we are now. I miss 5ths sleekness, but the amendments now are fun, pure and simple, which has got to be the point of all this. No one can say toy soldiers is a serious thing, no matter how seriously you take it at competitive levels.

I'm so enamoured with 7th I'm entering my first tournament, a doubles event. I'll be diving deeper into the meta and addressing the perils and pitfalls therein. I dare say my opinions will change, but I'm back and for now, the game is in a reasonable state.

What do you think? Have GW lost their way completely in search of profits? Is 7th broken enough that you're questioning your involvement, or is
the current format continuing to give your local group fun, interesting and competitive games despite the nay-sayers?"