Here's something we will all have an opinion on, rules lawyers.

Whether a necessary evil or a blight on the game they are here and they are thriving. A huge part of the game at any level, are those people who just have to pore every word of text to find an advantage. I've heard it said it's the fault of the games designers, writing shoddy rules and leaving them open to interpretation, and in some cases I can see that. But other times I feel that the authors take some things for granted, that maybe the playing populace does not.

For example, in my experience, most things work hierarchically, such as computer code,  organisations, other games. What this means is that at a high level, sweeping generalisations are made that effect the overall direction of things and give a fall-back position for when no more specific order is received. Then, lower down are the context (or in our case model) specific rules, that by default build upon or negate the high level instruction where ever there is conflict. This is true in 40k, and is a fact that seems to be wilfully ignored on most forums I've ever happened across.

A case in point are invulnerable saves. Model X has a 4++, meaning it will *always* have a 4+ save. That's two layers of hierarchy, the Invulnerable save USR, and the model specific modifier. So it's safe to assume you can forget about not having an armour save with this dude.  Until you get an assassin with a C'tan phase blade, which is a weapon specific rule, on a lower level of the hierarchy
again, which states that no saves of any kind maybe taken.

This is an easy one, it's not just clear, it's hierarchical values are clear too. If I was a rules lawyer, I could look at it and say that "no, the USR says 'invulnerable', and I'd be wrong, because that is ignoring the hierarchy and isolating the sentence. I suppose as an example it seems frivolous, but this kind of thing happens all the time, ignoring the hierarchy to gain advantage. 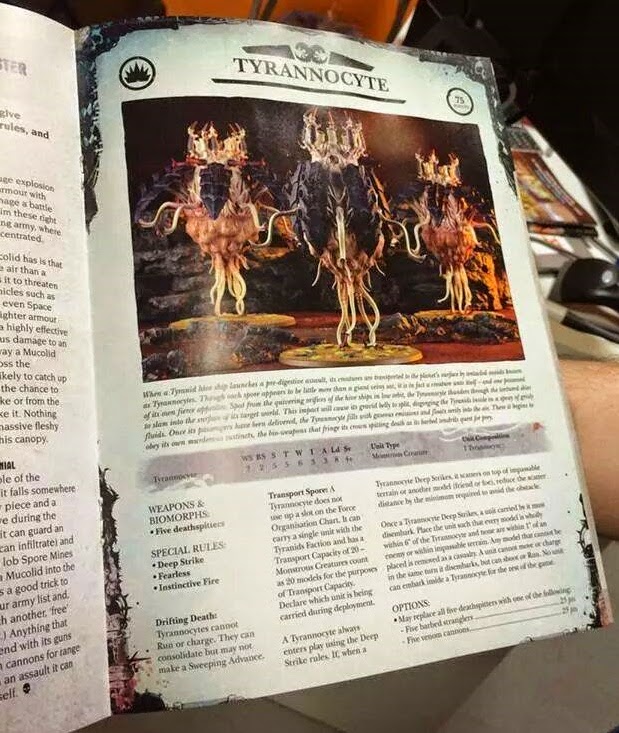 Which brings me to my current bug bear; Tyrannocytes. The question is, if you aren't already familiar, over the shooting. It has five guns, all facing away from the model on different sides. It also has its own shooting rules, that I can reproduce here because they're free on the Black Library;

Instinctive Fire:
Each weapon on this model automatically fires at the nearest enemy unit within range and line of sight. The shots are resolved at the end of the Shooting phase before Morale checks are taken. Each weapon can fire at a different target unit, but they cannot be fired in any other way or at any other time.

Basically, Tyranid players want it to be a monstrous creature, so it can fire all its weapons at one target. This just isn't the case, not least of all because an MC can only fire two weapons at a time. It's own, low level, model specific rules for shooting declare a consideration for targeting multiple units too. It also declares the pod must fire at the nearest unit from the muzzle of each weapon. Now, if its an MC can fire 360 degrees, and fire all weapons at the same target it logically negates the need for a split-fire style rule, as all weapons would always be firing at the nearest unit. The inclusion of a split-fire type rule means that the original statement that it fires each weapon at the nearest is as written. Each weapon, measure to nearest unit, they fire at what they can see, and certainly not spinning around or firing through itself.

It's that clear, and the people saying "ignore the designers note", well, that's brave, you know better than they do? That's not likely.

Now I know how this works, the forums and lawyers will prevail with whatever they decide, and the tournaments will rule to general consent, which is not necessarily really that bad a thing. I feel sad for the designers though, sometimes their work gets washed over with what people want the new hotness to do instead, but I suppose that comes with the territory. Once you release something to the public, it's not yours anymore.

For now, at home and playing for funsies I would say when trying to figure out unclear rules, always remember to apply a hierarchical approach. Start with the USR's, and modify progressively down until you get to the end. If that fails, just roll a dice and get on with the fun stuff of shooting your opponents army in its weak and snivelling faces!
By Unknown