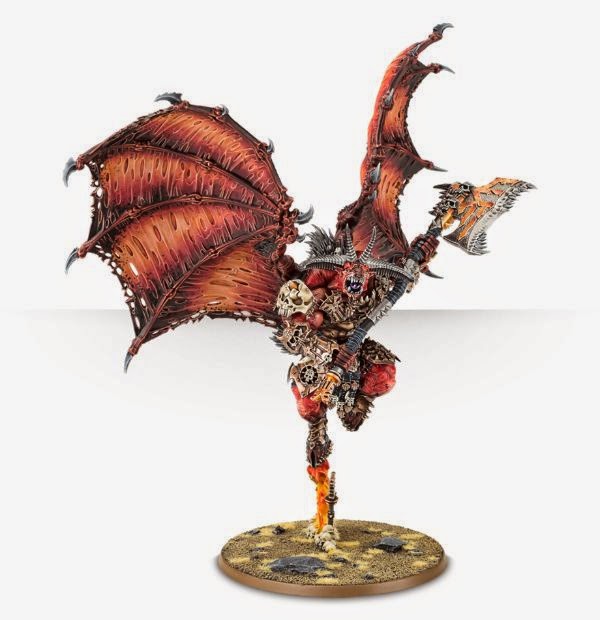 So the new Bloodthirsters are out in this week's White Dwarf, and it is my mission to see if it is worth the points. So first impressions? $117 for a HUGE chunk of plastic. I play CSM/Daemons, and it's a Greater Daemon that looks amazing. After assembling it, I can say that it was worth the money in the

Identical to the stock Bloodthirster, useful for killing things. Has issues with survivability against massed anti tank fire unless it's flying. Which it wont be because you can no longer assault in the same turn you change flight modes. Hide him behind terrain and choose your targets wisely (so NOT assault terminators). Worth his points usually, but still loses out in favor of Daemon princes. It's worth it to note that the new model is a lot bigger than the old one, so be careful of the lines of fire people can draw on your model.

Here we go! The new stuff. For 25 points more it has some upgrades. Same profile, 2 major differences: Rage (+2 attacks when charging) and trades his axe and lash for a D strength close combat weapon. We all know that anytime you use a letter instead of a number, it's about to get serious. With 8 attacks on the charge, every hit you get, instead of rolling to penetrate or wound roll on the destroyer weapon table! On a one, nothing happens, 2­5 dealing D3 wounds/Hull points, and a six generates you D6+6 wounds/Hull points WITH NO SAVES OF ANY KIND ALLOWED. The price of this ability is that you fight at initiative one. This guy is my personal favorite, as it can dish out the punishment against anthing you want to kill. It still has problems surviving against shooting, but you are now much more likely to kill what you were going for.

This one trades in his lash for a Bloodflail and Hellfire. Hellfire is a heavy flamer with soul blaze, and Bloodflail is a specialist weapon, giving him +1 attack in close combat pairing with the Axe. It is also a lash of Khorne with +1 strength and D3 shots. He also gains Adamantium will for a little more protection against psychic powers and Hatred (Characters). All of this costs an extra 50 points compared to the stock Bloodthirster.

In conclusion, the Insensate rage version offers the most increase in destructiveness for the price of a powerfist. While none of the new versions offer more protection to the things that usually kill them, the Insensate rage version offers the ability to kill things that give Daemon players and to a lesser extent CSM players problems: AV14. All of a sudden your other main fire magnets are less of a priority compared to a monster that can one round kill a land raider no sweat. I like it!

By SMARTEYE, Herald of Khorne