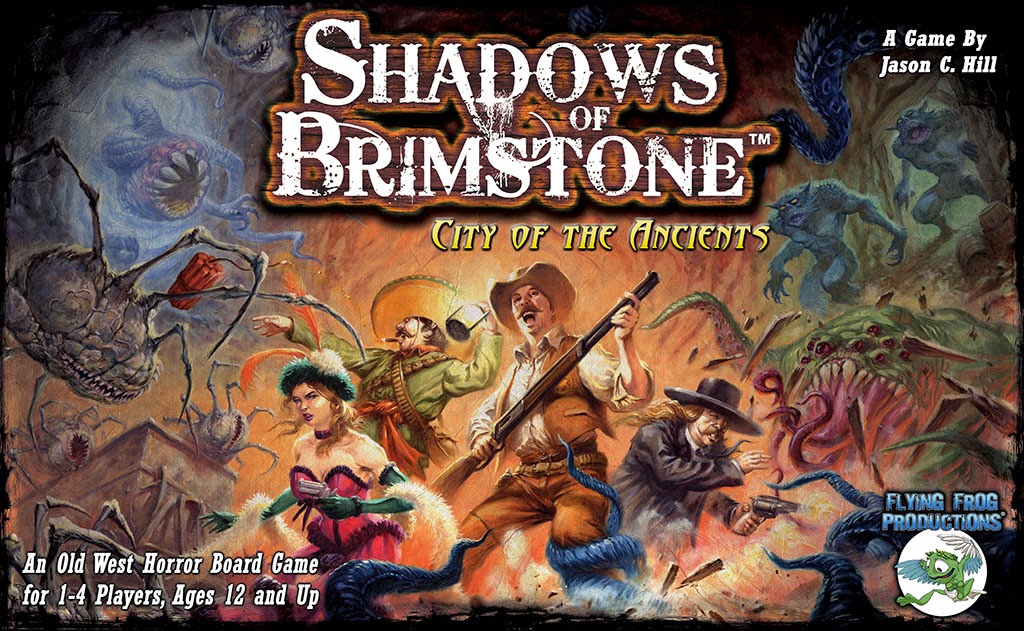 Something evils dwells within those old mines and it’s your job to stop it. So grab you six shooter, pull on your boots and perfect your swagger because in this article we will be taking a look at the Wild West Horror Game, Shadows of Brimstone.

Born out of a highly successful Kickstarter last year, Shadows of Brimstone is the brainchild of board game aficionados, Flying Frog Productions.


This cowboys vs demons/aliens/zombies/hell spawn game currently comes in two sets; City of the Ancients and Swamps of Death. We will be focusing on the former of these sets in our first look at this Wild West dungeon crawler game.

All of the miniatures found within Shadows of Brimstone are hard plastic and come on sprues. About half of these miniatures require as least some assembly with them varying in complexity from gluing on a hat to assembling full arms, legs, torso, feet and head for the larger creatures. 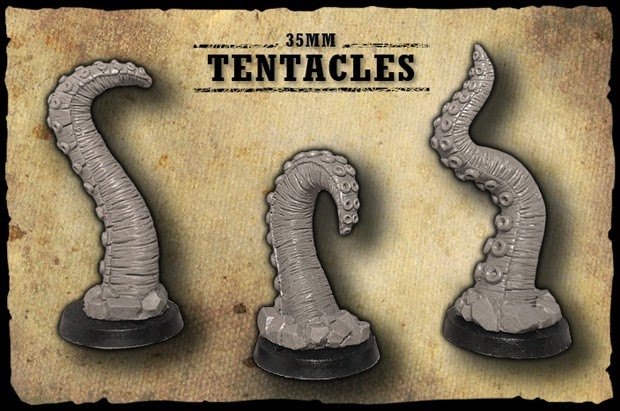 The heroes featured in this set are The US Marshall, The Bandido, The Saloon Girl and The Gunslinger. These four heroes will make up the intrepid adventurers that you will be controlling during your games. Each of the characters is clad in typical western garb representative of their given archetype. For example The Bandido sports a sombrero and crossed ammo belts whilst holding a bundle of dynamite whereas the Gunslinger is equipped with a long duster and his trusty six shooter.


However, it is the enemies which are most interesting miniatures in this set. These denizens of the deep range from scuttling Void Spiders to the larger Night Terrors. All of the creatures that you will face in this game are very Lovecraftian in their aesthetics, especially the giant tentacles which appear to be bursting out of the ground. The largest, and most fearsome, of all the enemies in this set is the Goliath. Spewing grasping tentacles from its open maw this beast will prove a formidable opponent to the brave heroes.

While I wont be going into too much information regarding the rules, this will be covered in later articles, I will briefly explain how the rules are presented in this set.

Shadows of Brimstone comes with 2 rule books, one which describes the general game-play rules and second Adventure Book which is specific to the City of Ancients Set. The rulebook is your guide to playing Shadows of Brimstone. The rules are nicely laid out and feature images to help illustrate its concepts. The Adventure Book contains scenarios, background, special rules as well as information on player progression. 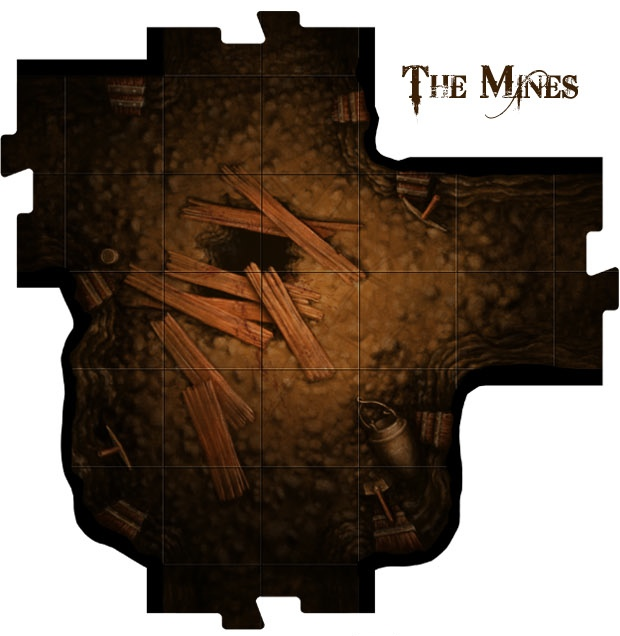 Shadows of Brimstone comes with a vast amount of gaming materials to assist you in gameplay. There a multiple card decks included which serve a variety of purposes from decided what enemies have appeared to attack you to decide which map tile to place down next. The game also features a soundtrack CD which can be played to create a suitable ambiance whilst playing the game.
The 42 map tiles come in a variety of forms such as corridors, room and junctions. All of map tiles
feature some fantastic artwork and are doubled sided with a mine shaft on one side and a frozen city on the other. The tiles are sturdy and feature jig saw like connections which ensures that your dungeon will not come apart some your table be knocked.

Shadows of Brimstone is a hefty box packed full of a plethora of gaming materials and miniatures. There is no need to have to purchase everything separately as all you need to play the game can be found in this one box. These include the generous amount of map tiles which allows you to achieve a vast sprawling dungeon without the inconvenience of running out of tiles.

If I had to pick fault with what I have seen so far then it would be with the miniatures. While they are certainly aesthetically pleasing and have very characterful designs some of details are a little ‘soft’. However I do believe that the problem lies with casting as opposed to the original sculpts. Hopefully these minor production issues will be ironed out in future runs.

So that was the Shadows of Brimstone: City of Ancients, from the outside it appears that the game will be fantastic fun to play. As such I will be returning shortly to the deep, dark mines with a game play review / walk through to give you an idea of how the game plays so be sure to check back regularly.