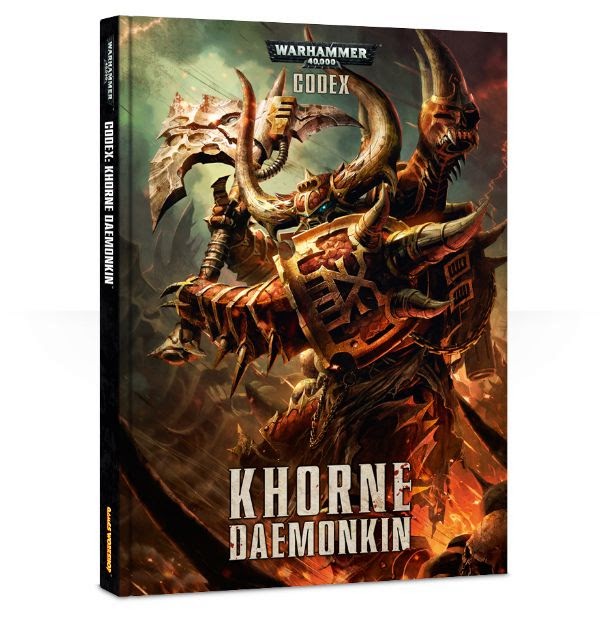 The demands of the Blood God have brought me back, so let's take a look at the codex!

I know it's been a while since I've looked at a codex for you guys, but rather than spending a lot of time getting into all that, let's look at this new codex.

Now Khorne Daemonkin is an interesting book as it's the first time in a number of years that the Chaos forces have regrouped into a single book, only this time it's with the theme of a single chaos god. If this a sign to come for the other Chaos Gods (and perhaps Chaos Unbound), or a test book, or perhaps just a cheap cash in to get Khorne some love (and help push the new Bloodthirster) I can't be sure of yet, but we'll see soon enough.

That musing aside, what does this book bring? The short answer is not much new.

To simplify this 120 page codex I'm going to give a very brief summary of the changes of the things that were carried over from the Chaos Daemons and Chaos Space Marine codexes, as well as the Bloodthirster rules from the White Dwarf. But before we can get into those, let's look at the core rules for the army. And just a small preface to the rules: the Warp Storm table is out, the Chaos Space Marine gifts and challenges rules are gone, and the Daemonic Instability rule is gone.

A lot here, but not a lot of rule changes (other than the ones mentioned earlier):

Lord of Slaughter (0-1 per Slaughtercult) (not a Formation)

War Engine (not a Formation)

Just one last thing to cover before I give my thoughts and wrap this up, and that's the wargear. I'm not going to cover it all because most of it is the same you've seen before, but there are a few standouts:

The biggest bonuses to these units comes from the formations. Without them they're the same units people have been complaining about for a long time now. The loss of some of the Gifts for Daemons is pretty bad for the Daemons too. The artefacts aren't bad, but they are really limited with models only being allowed access to one period, and Bloodthirsters not allowed to take any of them. To make it worse for the Bloodthirsters, they have no upgrade options at all (not even the Daemonic Gifts that the Daemon codex has).

I do like the lore bits, and the paint schemes aren't bad (the art for showing off the colors is similar in style to the flat colors Necron codex) and I liked the idea of the squad markings being based on different styles of tally marks, stylistic axes, and Khorne symbols because honestly squad markings are something Chaos needed just to make it easier to separate models out.

That said, my personal feelings are mixed but I have some thoughts if you should buy it or not.

So what are your thoughts on this book? Has it scratched your itch for Khorne, or has it left your bloodlust unquenched?
By Zion