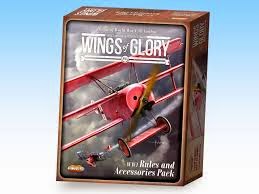 WW1 is often remembered for its trench warfare however the First World War also saw the dawn of air combat on a large scale. These early dog fights are recreated in Ares Games Wings of Glory WW1. This games sees players taking control of histories iconic bi planes and fighting it out over the battlefields of Europe.

So grab your goggles, let a white scarf billow majestically across your shoulder and yell 'Chocks Away!' as I give you the low down on this fantastically fun game of planes.

Wings of Glory is played with, yep you guessed, airplanes. All of which have been faithfully reproduced from those in use during the Great War. They are all in 1/144 scale and are constructed of a mixture of metal and plastic. All of the planes are nicely detailed and come pre-assembled and pre-painted meaning you can use them in your games straight out the box. Interestingly there are several paint schemes available for each plane representing the schemes employed by actual WW1 pilots.

Each of the planes come with a flying stand consisting of a base and 4 rods which can be stacked on top of each other to represent the planes altitude in game. The base of the plane also details the planes stats such as damage points, movement deck and their weapon damage. Additionally the planes arcs of fire are also detailed on the base.

Wings of Glory makes use of cards as its main game play mechanic. Cards are used to determine movement as well as damage. Dice are not used at all and the only measuring performed is for the determining if an opponent is within weapon range.

The game turn consists of three phases. These phases are performed simultaneously by each player and pre-planned a the beginning of the turn. Each players picks three maneuver cards from their deck at the beginning of their turn and assigns one to each phase whilst keeping their choices hidden from their opponent. At the start of each phase each player reveals their card for that phase and performs

the movement detailed on the card. But before I continue allow me to explain these maneuver cards.

The maneuver cards each feature a different movement such as forward movements, turns, weaves and even special movements such as Immelmann turns. By lining these cards up with the base of your plane you follow the arrow on the card until your plane reaches the final position. This movement system is similar in style to X-Wings maneuver templates and provides a simple yet robust method of movement.

Once movement is complete players determine if their opponents are both within range and within their field of fire. If they are the hit player draws a card from one of four damage decks marked A-D with A being generally low damage and D being the highest. These damage cards are then added to the associated plane without revealing the actual damage figure to the opponent. Special damage can also occur when using more advanced rules such as rudder damage, fires, smoke, pilot injuries and weapon jamming. If the added value of your damage cards is equal to or greater than your planes damage value then it is destroyed and removed from the game.

So that is the basic premise of the rules. As you can probably tell they are pretty easy to grasp even for a complete novice of these sorts of games. This is enhanced by how the rules are presented in three distinct levels; Basic, Standard and Advanced with optional rules which can be added to each depending on how complex you want your game to be. These flexibility not only helps to flatten out the learning curve but also allows you to tailor your games depending on how much time you have or how in depth you want the game to be.

Wings of Glory is fast paced and undeniably fun to play. You can easily get into some rather entertaining dog fights with your opponent as you try your best to anticipate your targets next move while at the same time they are doing all they can to shake you off.

You'll find yourself pulling your best poker face in an attempt to not give away your planned movements. The deception element of game keeps things fresh as you try to outwit your enemy while at the same trying to unravel their own schemes. The simplicity of the rules means you can leave your rule book mostly untouched during the game allowing you to concentrate on strategy more than remembering rules. 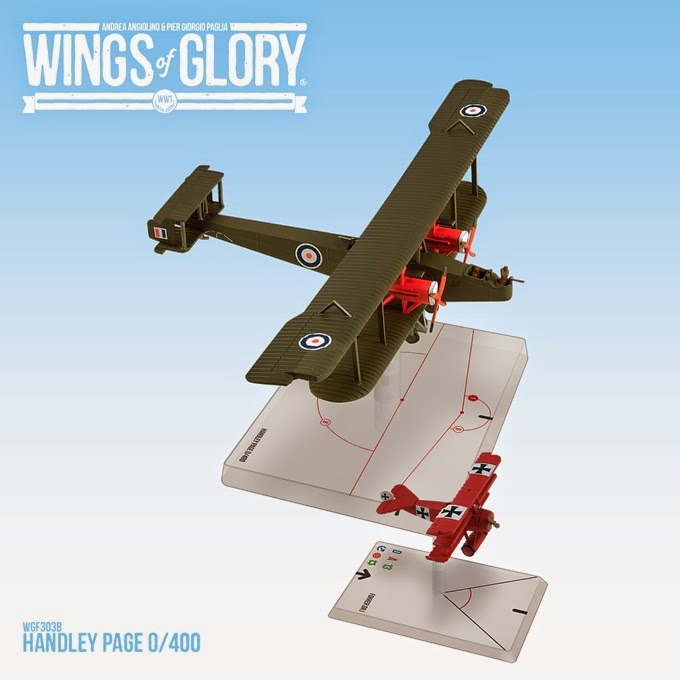 While I am focusing on Wings of Glory I should point out that their is currently a Kickstarter campaign running in order to fund an expansion to this game. Giants of the Sky features some huge, and I mean huge, planes to add to your fleet. These are the British Handley Page O/400 and the German Zeppelin Staaken R.VI some of the largest planes to take to skies during WW1. You can see from the pictures just how much the regular fighters are dwarfed in comparison.

The campaign ends on April 2nd so be sure to check it out before then. Click here to be taken to the Kickstarter page.

If you're looking for a game that you can play without having to invest hours of assembly, painting and learning rules then Wings of Glory is perfect for you.

It's also a great game for beginners. My fiancee, who is a firm non war-gamer, was able to pick up the rules within minutes and enjoyed the game enough to want to play it again. Even if it did mean having to sit through a Nicolas Sparks film in exchange (the sacrifices I make for war-gaming!).

My one criticism is that you are reliant on your opponent being honest. As you do not know how much damage they have sustained they can quite easily keep their plane going for a turn longer than they should. Equally they can easily ignore rudder damage without you knowing any different. While cheating does of course take away the from the fun of a game and is bad sportsmanship their are unfortunately unscrupulous people out there.

But if your gaming buddies are fair and honest their is no reason that you cannot get some fantastic experiences from playing Wings of Glory: WW1. Not only is it greatly fun to play you'll also earn yourself quite a nice collection of miniature planes to keep on display.
By Unknown