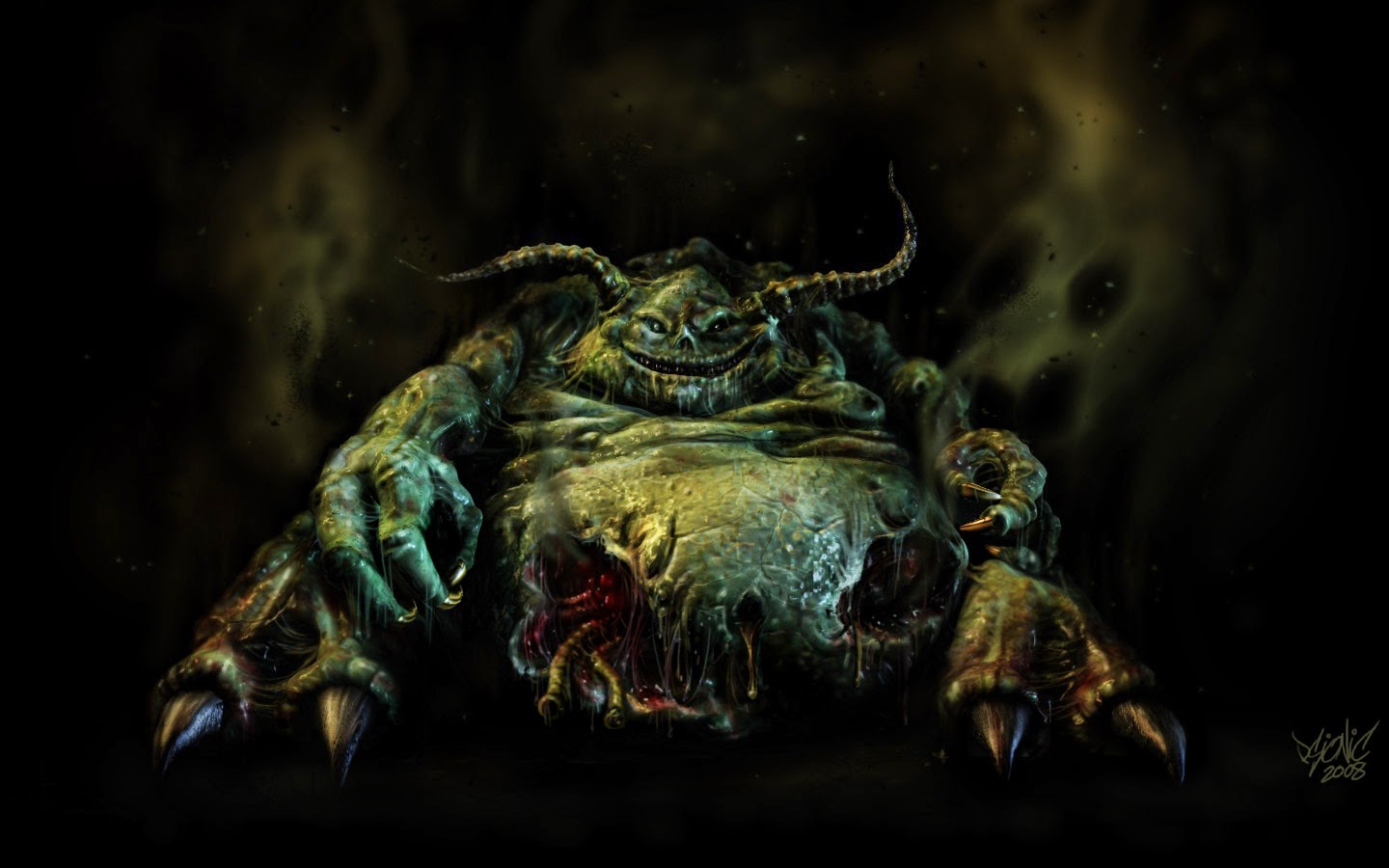 Today I found an old ridiculous story I wrote back in the early days of Heresy-Online. Enjoy.

Furgol watches from the shadows as the rickety cart rumbles past. On another night the occupants would be his target, not tonight he thinks. Tonight he has another plan. A plan so disgraceful even the Plaguefather himself will be proud. He waits until he hears nothing but the wind and ventures out into the chill night.

He travels purposely and quickly through the squalid streets, hiding when his presence is threatened by prying eyes. To be seen will ruin his carefully laid plan, weeks of plotting and scouting has gone into this great endeavour. He memorised the entire route, he even practiced it. If his last eye was removed he'd still make it this night.

It is his destiny.

Furgol knew of his differences from the day he was born. Ostracised by his mother he was cast aside and left to fend for himself. He survived on the scraps of rotting meat he found in bins, sometimes he'd break into people's homes and take what he wanted. That is no mean feat for he walks on twisted stumpy legs, his hair is matted and crawling with lice. He stinks to high heavens and frightens the children that lay eyes upon him. Furgol doesn't care.

Furgol rounds the last corner, stops in his tracks and looks up in awe.

There it is, the grandest building in all of Eisenbad. It stands apart from its surroundings, resplendent in decor with high pillars of stone. Curtains of the finest silk billow from the open windows catching the light of glittering chandeliers within.

This is the target he thinks, a place alive with power and wealth.

Furgol crosses the road and leaps the fence. He moves hard and fast without stopping for breath, without taking his beady eye from the open window. Despite his physcial disabilities Furgol is the greatest climber in town. He has long claws and a powerful squat frame. He scales the walls in seconds before dropping quietly to the plush carpet within.

Furgol fights the urge to wretch as the strench of perfume assails his nostrils. Damn his keen sense of smell, it's a boon and a burden combined. A soft noise comes from the room immediately opposite. That isn't the target, the young are innocent and deserving of a chance to turn to his master. Furgol moves quietly along the corridoor, careful not to knock into furniture or make any noise. His target lies ahead. He can see her through the open doorway, her lithe body silhouetted against the street lights beyond.

Furgol enters the room and walks around the sleeping Mayors wife. His breath baited, his heart beating wildly in his chest. The excitement is unbearable. He waits a moment to compose himself then leaps onto the bed.

MEOW! He wails as he empties his bowels with an obscene gurgle.

"GET THE FUCK OUT CAT" the Mayor's wife yells, beating at Furgol with an expensive pillow.

It's too late. The Gift is laid.

Furgol bolts to the window and dives into the night, leaving behind a festering pile of shit. The plaguefather will be pleased he thinks.