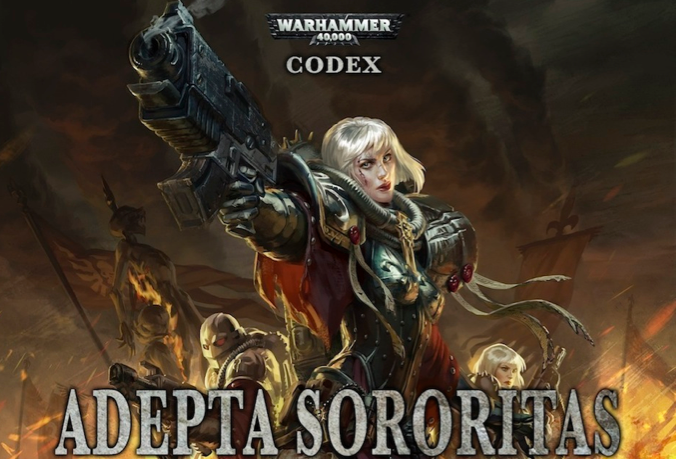 It's time for a full all inclusive roundup of the Adepta Sororitas Rumors that are floating around here there and everywhere on the web. As usual I'll update this post with new content as it filters through in the coming weeks.

I've posted the following Adepta Sororitas rumors in chronological order starting with the newest ones at the top and the older to the bottom.

These are on ice and only await release scheduling by GW.

Look for this campaign on the far side of WFB 9th which is occurring earlier in the year.


Regarding Sisters of Battle

From a little Ripper Swarm to me:

The Codex is done, the models are in production, and it's nebulously a Q2 release. It's the Dark Eldar treatment-- rebuilt the range from the ground up, completely.

After the featuring in the Shields of Baal Campaign i think its possible for a near Sororitas release. The Codex is complete and can be released every time. More rumors do not exist at the moment.

From Bolter and Chainsword:

Originally Posted by [B]Ishagu[/B]
A Hardback Sororitas Codex with plastic kits. I was told something similar by someone in the know not long ago. It could be true...


Originally Posted by [B]Sephillion[/B]
I’ve heard more credible things about Sisters being later (next year), and the fact that they would redo Dark Angels, CSM and Daemons so soon… instead of redoing the problem Codices… seems like whoever wrote this just assumed GW would follow the same order.


In another one of Games Workshop's truly plot twisting actions, some of these models and squads have been added back to the store but are sometimes labelled as NLA or out of stock.


June 30th 2014 - Updated for new edition of Warhammer 40,000 Only noticeable update at this time seems to be removal of allies chart for reference to new 7th edition chart in core book *unverified*

Originally Posted by DeSteele
Reply that I received today from Black Library to my query of if/when the SoB codex was going to be updated to 7th.

Thank you for your email. Codex: Adepta Sororitas will be updated by the end of this week.

Many thanks,
And no, not updated at the time I wrote this email.

Recently, as of the summer of 2014, the Games Workshop webstore has eliminated a relatively large number of models from the Sisters of Battle range. These models were first labelled as "No Longer Available" but have since been completely removed from the store altogether.

Update 6/28/2014: As of approximately this time these models/units have been completely removed from the webstore *Amended as of 7/2/2014

THIS website has a good complete list of the original models released for the SoB to give an idea of what has been discontinued over the years.

It's worth noting that all of these models have a basic variant which is still available, so it is possible to still create for example a squad of Seraphim, albeit to do so you must now buy single units, one at a time, and with the exception of special weapons, the entire squad will be the same cloned model. This means that the vast majority of Sororitas models have been reduced a single variant/model.

This correlates, as has been rumored, that Games Workshop has vastly minimized their metal casting capabilities and is eliminating scores of models from production.

Hopefully it indicates that plastic Adepta Sororitas models will soon be released since this stands as a staggering reduction in the production of this army. Keep the faith