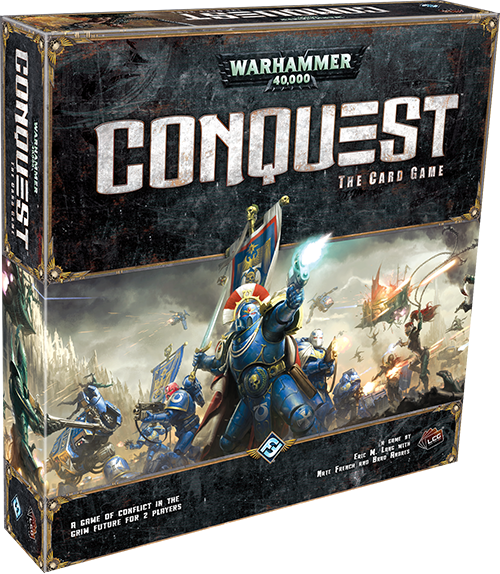 In this review I will be briefly departing from our usual content of miniature based games. Instead I will be focusing on something relatively new for me, Card Games. However it is not entirely new territory as the game in question will be Warhammer 40k Conquest from Fantasy Flight Games.

So while my experience with card may not be as vast as it is with plastic I still have a good grasp of the characters, units and locations detailed in the game. So without further ado lets take a look at the core set of the game.

All of the cards within Conquest are adorned with some exquisite artwork. Those of you who own a few Codexes will be familiar with some of it but there is also plenty of original work as well. The Warlord cards really stand out here and will make any miniature modelers want to re-create them for their gaming table.

Conquest is designed for two players, with each choosing to play as a race from the 40k Universe. Included in the core set is Space Marines, Imperial Guard, Orks, Eldar, Dark Eldar, Chaos and Tau. Each race has their own named Warlord and a host of cards unique to their race. These cards feature a whole host of war gear and units familiar to anyone who has played the tabletop game. 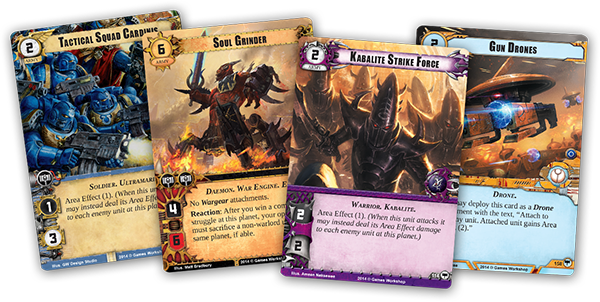 The aim of the game is to either capture three planets that share the same *INSERT NAME* or to kill your opponents Warlord. The game itself follows a simultaneous turn system with one player performing their action for that phase followed by their opponents action. The order in which this is done is based on who has the Initiative for that turn which alternates as the turns progress so you are always involved in the action and never waiting for their opponent for any length of time.

The game also features a resource system which must be spent in order for a player to play any cards from their hands. Each player receives some resources at the start of each turn but more can be acquired by controlling/capturing planets or through special card actions. This mechanics helps to add an additional layer of strategy to the game. You'll find yourself debating on whether or not to save up for the that Dreadnought and miss a deployment or send out some cheap scouts in the mean
time. You are also constantly looking for how to get more resources, be it by capturing planets or exploiting your special event cards. 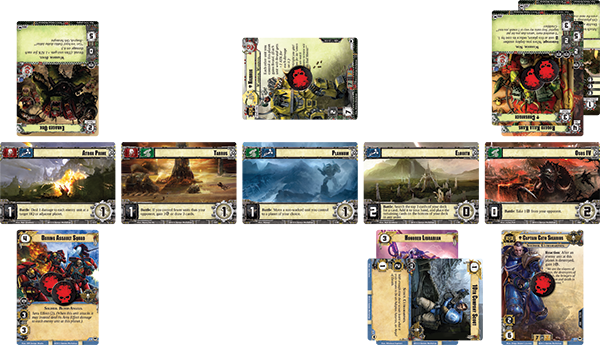 Unsurprisingly, the combat is where the game really shines. Planetary battles between units will continue until one side is wiped out or retreats with each unit taking turns to attack their opponents. This is a great way to avoid tedious stalemates and gives the game some good pace. However, it is not simply a case of throwing units into a meat grinder. Preparing for the battles by deploying the best units for the job and equipping them with special weapons is vital for ensuring victory. However, even when you are feeling overwhelmed, Support and Event cards can be played to turn the tide of battle albeit at the expense of precious resources.

As I mentioned before, one of the ways you can win is by capturing planets. Whilst there are several planets in play at one time only the 'First Planet' can be captured. Battles can be fought anywhere else but victory will not result in the taking of the planet. This ensures that there is a front line of fighting where players will inevitably channel their troops making them the locations of the larger battles of the game.  However, smaller skirmishes may be fought in the outlying planets in order to secure additional cards and resources to fuel you war. 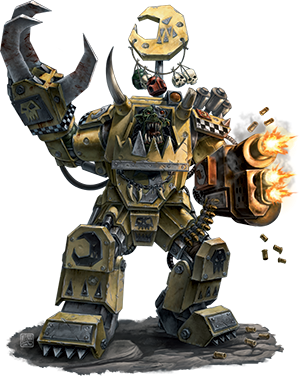 Being a complete Novice the card games I found Conquest to be exceptionally easy to pick up. The games comes with two rule books, a quick start guide and a rules reference booklet. The quick start guide guides you through the games turn sequences and introduces you to the games concepts in a clear and concise manner. The booklet is well illustrated and laid out with plenty of diagrams to help explain the more complex points. In addition to what you get in the box there is also a fantastic video tutorial created by Fantasy Flight Games to aid the new player in learning their game.

Once you have mastered the basics game play is fairly quick paced, this coupled with the fact that it is very easy to set up means games can feasibly be played and finished within an hour. While there were a few times where the rules were not especially clear on a subject it wasn't too difficult to find a solution be it a house rules or flipping a coin.

While my experience of Card Games is not a vast one I can say that I thoroughly enjoyed playing Warhammer 40k Conquest. For a newbie to the genre I found it to be quite a good bridge between my past in tabletop 40k and Card Gaming in general. The online resources and the rulebook made learning the game a stress free experience and I was playing the game with little rule book reference within no time. Requiring much less in terms of collecting and setting up its a fantastic set for getting started straight away.

The core set can also be expanded upon. Marketed as a 'Living Game' there have been 6 expansions with each set featuring a new warlord and new units for their respective races. This is good news for anyone who is a huge fan of deck building as you get much more choice in how you play.

So whether you are a card game veteran or a fan of 40k looking for something a little different Conquest is a great game to try. Everything you need to play is included in the Core Set which means you can get down to gaming straight away, although it is a rather strange experience to play a game of 40k without dice...