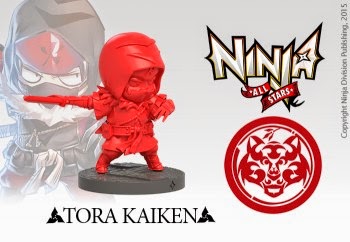 The guys behind Super Dungeon Explore​, Relic Knights Darkspace, Calamity​ and Takoashi University are bringing Ninja All­Stars​ to Kickstarter this March. Ninja Division Publishing and Soda Pop Miniatures announced that their project will not only fund the new game but also its expansions
which will include additional clans, characters and more.


Ninja All­Stars​ is a miniatures based board game which focuses on the mystical ninja island of Kagejima. The game allows players to build teams of ninja from six unique clans, each with their own powers and abilities. You will also be able to hire famous heroes and wandering warriors to join your clan. The game, like its predecesors, will feature a range of miniatures in the 'chibi' style and has a heavy Manga and Anime influence to their design.

The game will be designed to allow for both single play and also league play by featuring an experience system which will allow you to learn new skills and make your ninja even more dangerous as the league progresses.


We will be keeping our eye on this project so be sure to check back for any updates. But in the mean time head over to the Ninja Division website for more information on the game.