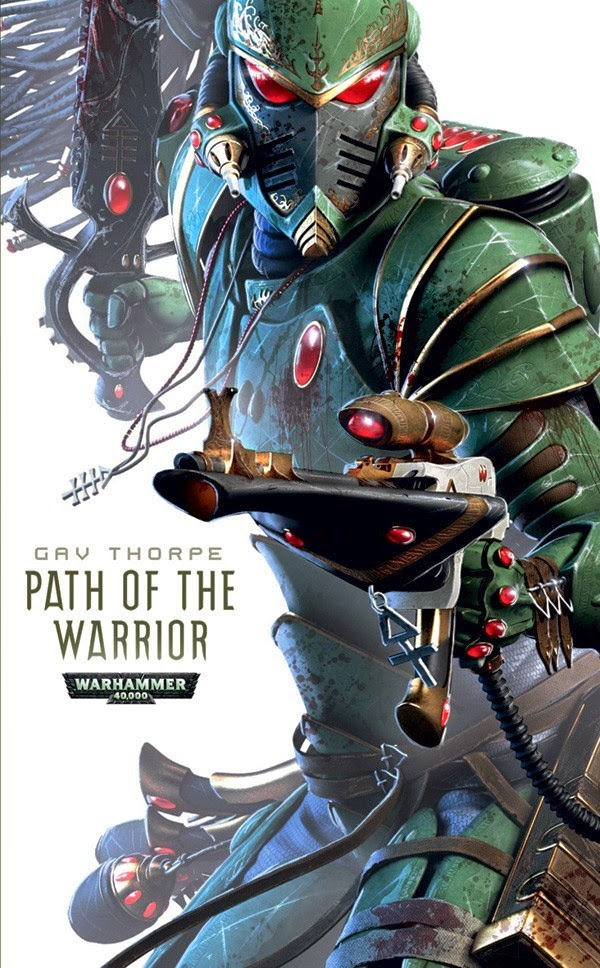 Lord of the Night reviews the very exciting and very anticipated first novel of the Path of the Eldar series, Path of the Warrior by Gav Thorpe. (This is an older review, reposted and edited. Originally posted at Heresy Online on 28th May 2010.)


"A book that fulfills every single hope for the Eldar that I have had since I first wondered what a real Eldar novel would be like. This is a novel that anyone who calls themselves a fan of the Eldar should add to their Must-Read list. A triumph for Black Library and for Gav Thorpe." - Lord of the Night @ Talk Wargaming

Last night I received and finished the first proper Eldar novel in Black Library, I don't count Eldar Prophecy for obvious reasons. The Eldar are a faction that have always been involved in Black Library novels and short stories, but almost never as the central focus. It has been a long time coming for the Eldar to receive their own series, but of course there is/was concern, could the Eldar be potrayed in an alien yet understandable manner. After getting the novel and absolutely charging through it I feel that I can safely say the concern was for naught. The book was spectacular, portraying the Eldar in a beautiful way and showing the inner workings of many of their aspects, and especially the darker side of their warriors through the Exarchs.

The Path of the Eldar is fraught with peril and darkness not just from without, but from within as well. Korlandril, a young Alaitoc Eldar on the Path of the Artist, after a disagreement with his friends begins to experience new and terrifying feelings of hunger and fear. As the feelings begin to take over the fragile artist's psyche, Korlandril finds himself drawn to the Path of the Warrior and to the embrace of Kaela Mensha Khaine, but as this newly forged soldier begins to walk further and further down the Path of the Warrior, he begins to learn that his is now the most dangerous path of them all, and that sometimes, once you have begun to walk the path, you can never go back again.

The story of PotW is a very character driven one, focusing on Korlandril and his journey along the Path of the Warrior and how it affects him, his friends and the people he cares for, and his Craftworld. With hindsight it is obvious that PotW is meant to be one characters look at a wider event, and the sequels that follow show different characters personal adventures through this time of trial. PotW was an enjoyable and interesting story from start to finish, seeing how Korlandril begins to change as he gets further and further along the Path and how this begins to change events around him, and what both his choices and the choices of others result in makes this a book that was very hard to put down. Thorpe does a very good job of telling Korlandril's personal story while at the same time subtly advancing the wider story, since Korlandril doesn't play a role in these early events we don't see a great deal of what happens beyond the brief reminders that Thorpe puts in that something is going on beyond Korlandril's own trials and tribulations.

The character aspect to the story was the part that would make or break the novel in my opinion, and Thorpe nailed it. The Eldar are incredibly alien in their mindset, culture and even the little things that make up a day to day life have a distinctly non-human feel to them, but with just a few human-like traits so that we can understand and empathize with these alien characters. One of the quirks of the Eldar that Thorpe did so very well was their use of subtle body movements as conversation, which was quite prominent in the novel, with gestures and body movement being as plentiful as actual conversation, and showing how they are very important to the Eldar and are as subtle as tone and inflection in actual spoken language. The actual characters themselves were also very nicely done, Korlandril himself felt like a young man seeking to find what he is truly meant to be in life, while grappling with what he wants for himself. In some ways he felt like a moody child, and at other times he felt like a strong and capable person; these personality shifts do have a reason in the story but at the same time I felt they nicely showed exactly how emotional the oft-stoic Eldar can really be when they let their barriers down. The other characters were interesting, but it's Korlandril that is really the focus of the novel, but we do get a really nice look at how the Exarchs work later on and how a being that is a gestalt entity of multiple personalities with a leading member would function day to day and how such a being would think and act. We also get to learn a lot about how the Eldar view us, seeing the Imperium from the Eldar view. Guardsmen as mindless fanatics and Space Marines as fearsome foes and enemies that match even the Aspect Warriors; a good mix between the general disdainand occasional respect that the Eldar have shown humanity in the lore.

The action scenes were another success, the Eldar fight wars very differently to the Space Marines and for this book to get the Eldar just right, their battles had to feel unique to them. And they did. In the tabletop the Eldar units are masters at what they do, but cannot multi-task in the same way a Space Marine can. A Striking Scorpion, the focus of the novel, is a masterful melee and ambush fighter, but a vehicle or range skirmishers are going to annihilate them. Thorpe not only writes engaging and bloody battles, but he also makes sure that the Eldar don't suddenly turn into the enduring Space Marines in these scenes, the Eldar feel powerful and deadly but also fragile, their battles rely on their commanders knowing exactly where to put each soldier and where each type of unit can do the most good, and when these units need to give way and allow another unit more appropriate to the situation to take over for them. Although that said, no plan survives contact with the enemy and Korlandril often finds himself in interesting situations that show how the Eldar adapt to the ever-changing battlefield. But since the protagonist and his fellows are Striking Scorpions, the Eldar version of a heavy ambush fighter, they do get stuck into the thickest of the fighting quite a bit, which means that the battles are fast-paced and visceral. The later scenes in my opinion were the best since they not only show the Aspect Warriors but also the other Eldar soldiers like the Guardians, Warlocks and the vehicles that ferry them into battle.

The pace of the story is very well-done, Thorpe takes just the right amount of time to establish Korlandril's angst and his situation in life before taking him onto the Path of the Warrior. The book also nicely meshes the story and characters with the exploration of Eldar society, the book is absolutely filled with interesting information about the Eldar that the Codexs would never provide, and yet it never felt shoe-horned in or that it was interrupting the flow of the story for the sake of showing off more of Thorpe's world-building; a good balance that makes the novel not only interesting as an adventure, but also just generally interesting for any fan of the Eldar who just wants to know a little bit more about their favourite 40k army.

My favourite quote, it was without a doubt this exchange from the final chapter;


"You must survive this war, move on along the Path, find the peace that you crave. Fight the darkness in you. Prove that the Path is right, that Khaine does not own us!"

The ending was an interesting one. At the time I thought that it was both good and bad for various reasons, but with hindsight I can now see that the ending was just what it needed to be for this series as a whole. Thorpe closes the story of Korlandril here and in a way, the entire series story ends here as well, but there are other ways of looking at events like the ones that occur in PotW and the sequels focus on that, with the third book of the trilogy revealing the finale of these events. But the ending of PotW is the ending of Korlandril's story and as an ending it was quite an interesting one, sad but also somewhat strangely happy, an ending that will definitely make you think for a little bit after you put the novel down.

For an enjoyable character story that promises more to come, a set of alien yet likeable characters that I found myself relating to at times, and what has to be the best look into the Eldar since their creation, I give Path of the Warrior an 8.5/10. This is a novel that any fan of the Eldar must make it a point to buy and read as fast as possible, this novel is everything that the Eldar have deserved for a long time, and more. However if the Eldar aren't something that interests you, you prefer the Space Marines or Chaos over them, or you aren't interested in books from an alien point-of-view, then this is not the book for you.

That is it for this review. Thank you very much for reading, until next time;