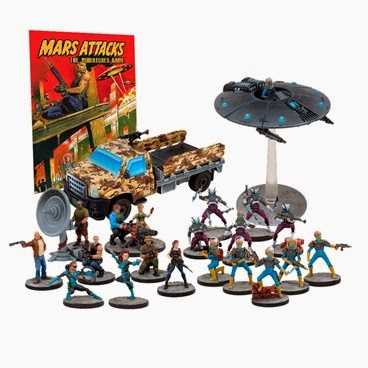 The Mars Attacks Miniatures game has received its first expansion in the form of the Humanity Resists set. This continuation of the storyline sees the humans rallying against the Martian invaders with the help of Novas Vira militia supported by exotic weaponry and Characters such as Agent Jack Falco and Agent Natalya El.

However, the alien invaders are also receiving reinforcements in the form of Stealth Martians, Martian Marines and the dreaded Flying Saucer. In addition to all these new miniatures we also receive an expansion rulebook featuring all of the new characters and units along with new scenarios in which to use them in. Let’s take a closer look inside the Humanity Resists boxed set. 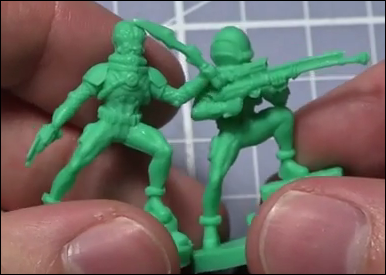 As the box contains two distinct forces, the Martians and the Novas Vira, I will be looking at them separately. First up we have the Stealth Martians, these are the most distinct of all the Martians as there uniforms feature enclosed helmets as opposed the clear domes of their more lowly counterparts. Their armor looks much more hi-tech, featuring smoother lines rather than the arm and leg segments seen on the grunts. The Stealth Martians are armed with Disintegrator pistols and fearsome looking blades with one taking aim with a sniper rifle whilst resting his leg on a broken wall.
The Martian Marines rank is also denoted by their armor. Whilst closely resembling the Martian grunts they feature shoulder pads along with more ridges around their leg joints. They also wield a rocket launcher as opposed to the grunt issued freeze ray. Finally for the Martian forces we have the Attack Saucer. The main body of the saucer consists of a single piece with a sprue of weapon options available. These include heat rays, freeze rays and improved comms. In addition to these you also get a choice of pilots, being able to choose from either a standard pilot or pilot commander. 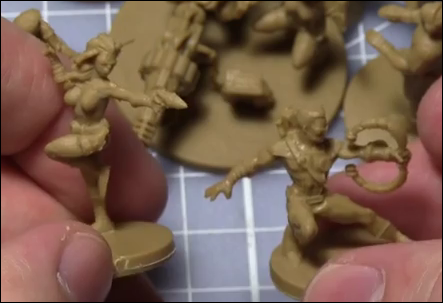 As for the humans we have some excellent characters in the form of the Novas Vira Militia. It's quite obvious that these Martian resistors were inspired by the action films of the eighties. We have a Arnold Swarzeneggar look alike and along with a character dressed in attire resembling Kurt Russel Escape from New York. The Novas Vira have also brought along some heavy weapons in the form of the Sonic Disruptor (a large radar dish operated by a bearded and short wearing man) and the two man Heavy Weapons team.
The Novas Vira are also joined by two special characters Agent Jack Falco and Agent Natalya El.
These two formidable opponents prove that it's not just the Martians who have some hi tech kit with both sporting futuristic jump suits and weapons. The human forces also receive some transport in the form of the flatbed truck. This kit requires the most assembly out of the box but is still incredibly easy to do so. The truck can either be assembled as a Civilian or Military variant with the simple addition of a top mounted machine gun and guard rails. Finally, as an exclusive for the Humanity Resists set, you also get a Pilot version of Joe. This miniature can be used inside the Martian Saucer or even the Stompy Robots which will be coming soon.

As before all of these miniatures (bar the vehicles) come in single piece, colored plastic. The plastic of the infantry is not quite as hard as that seen in Mantics other plastic kits but it still pretty durable. Some bending may occur but this can be easily rectified with a little hot water. The miniatures really do look fantastic, especially the elite Martian units with the detailing on the Stealth Martians being especially nice. The Vehicles, while requiring some assembly, have quite clearly been designed to be simple to build. While glue is not necessarily required for most parts I would recommend gluing the truck together for sturdiness.

If you enjoyed the Mars Attacks Miniatures Game I would highly recommend picking up the Humanity Resists expansion. Not only do you get a whole bunch of excellent new miniatures to play with the rulebook also comes with some additional scenarios. This is great if you have already managed to work your way through all of those which feature in the core rules. The boxed set is also much cheaper than buying its constituents parts separately, saving you nearly 50%.

While to miniatures are not the most highly detailed in the world they are great to look at and are even better once painted. But being able to play these miniatures straight out of the box is always an advantage making it the perfect bridge between war gaming and board gaming.  To pick up your own copy of Humanity Resists head over to the Mantic Games Web Store. If you would like to see more Mars Attacks content check out some of our previous articles: